Srinivasa Ramanujan isn’t a name most people know, but his story illustrates the power of migration to improve the world.

Born to a poor family in southern India in the late nineteenth century, Ramanujan displayed a remarkable mathematical mind from an early age, developing complex theorums as a teenager.

He was a genius, but he left school in poverty and seemed destined to live a life of subsistence. By chance, Ramanujan was discovered by another Indian mathematician and ended up at Cambridge, producing ingenious new ideas and eventually becoming the first Indian to be elected a Fellow of Trinity College.

Ramanujan was lucky. Had he not been discovered when he was, he could have easily spent a life in poverty, his genius untapped and giving nothing to the world.

The west’s immigration laws make it remarkably difficult for latter-day Ramanujans to exploit their potential. Ramanujan represents not just the geniuses lying fallow in subsistence agriculture, but all human talent that is not being tapped to its full potential.

Whether the reasons are poor governance, cultural constraints, poverty or other restraints on human productivity, billions of people are being condemned to lives of relative squalor, with no way out.

A person’s productivity is enormously dependent on the circumstances they find themselves in. Taxi drivers in New York City, over 90 per cent of whom are immigrants, earn between $25,000 and $28,000 a year (£). Taxi drivers in, say, Benin can expect to earn less than $1,440 a year for exactly the same work.

Lowering the borders to allow more people from poor countries to come and work in the developed world would harness this and make the world dramatically richer in a very short space of time.

A 2011 study of the existing research around the GDP benefits of immigration by Michael Clemens of the Centre for Global Development (Economics and Emigration: Trillion Dollar Bills on the Sidewalk?) found that removing all barriers to migration could increase global GDP by between 67 per cent and a whopping 147 per cent – in other words, more than doubling global GDP. (In contrast, the studies reviewed found that removing all global barriers to trade – still an important goal – would increase global GDP by between 0.3 per cent and 4.1 per cent.)

Would these benefits mostly accrue to the host countries, depriving poor countries of the productivity of human capital? It doesn’t look like it. Development economist William Easterly has cited four reasons that “brain drain” from poor countries is a good thing: benefits to the migrants themselves, benefits to their families (through money sent back by those migrants), new skills and fresh ideas from migrants who do return home, and the global “brain gain” of tapping talent and unleashing the ideas of more people.

A World Bank study that compared the per-capita income gain to Tonga from microfinance, deworming programmes, conditional cash transfers and a seasonal migrant worker programme in New Zealand. The results were staggering – migrant workers sent home huge amounts of cash, increasing spending and investment in Tonga to raise per-capita incomes by 30 to 40 per cent – see graph below. 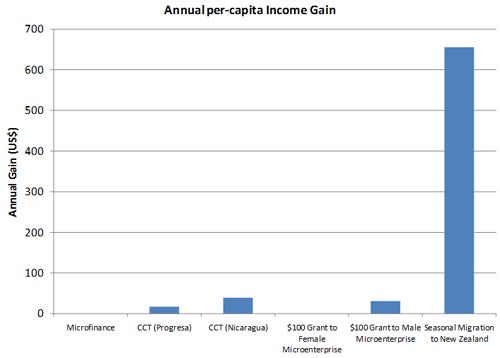 Graph from David MacKenzie on the World Bank blog.

We should reject the false choice presented by opponents of immigration between a fortress Britain and being “swamped” by immigrants. Fears of the welfare state being overrun are misplaced and do not reflect the reality that immigrants are actually helping to support state services. Immigrants to Britain pay more in taxes to the state than they consume in services – and since the average immigrant to Britain is young, we are counting on increased immigration to support our aging population.

There is a lot of evidence to suggest that immigrants are more entrepreneurial than the average person, as you might expect of someone who has travelled halfway across the world in search of a better life. A 2006 study in the US (pdf) found that “50 per cent of Silicon Valley engineering and technology startups were founded by immigrants (as were 25 per cent of such startups nationwide).” And, of course, the more innovation that takes place anywhere in the world, the better off we all are.

To libertarians and liberals, basic freedom of movement across borders is fundamental to human dignity. But everyone should be eager to make the world’s poorest better off and unlock the talent of more people like Srinivasa Ramanujan.