There has been a huge amount of misinformation during the pandemic. Much of it was unavoidable, especially at the start as we dealt with a new virus, but some myths are persisting a year into the pandemic.

The myths range from the ridiculous to the merely implausible, but together they are misleading the public about the danger of Covid-19 and other variants. These false claims could also have serious consequences, such as fuelling premature calls to end social distancing measures before the vaccination rollout has reached a safe level.

To combat some of this misinformation, a group of scientists, journalists, economists and other researchers have created Anti-Virus, a website that tries to address the biggest myths surrounding the pandemic, and highlight claims or points of view that have been expressed by figures in academia or the media that are no longer credible.

Myth 1: We are overreacting to a disease that 99.5 per cent of people will survive

This claim implies that fewer than one in 200 of those infected with the virus will die in a best-case healthcare scenario. However, even this blunt statistic misses the disease’s deadliness for the elderly, as well as the longer-term health problems faced by many who “recover”.

These rates would also rise across the board as more people became infected at the same time (for example, if the government had not imposed a lockdown this month), because the health service would be overwhelmed and unable to treat everybody. There’s also a growing body of evidence that “Long Covid” is real, leaving some people who survive the virus with long-term side effects, including serious organ damage.

Myth 2: Covid is only as deadly as a bad flu

This myth comes from mixing up case fatality ratios (CFRs) and infection fatality ratios (IFRs). The CFR only measures how many people with symptoms die of a disease, whereas the IFR tries to estimate how many people both with symptoms and without symptoms have died of it. The CFR of Covid is much higher than that of the flu – a current estimate of the CFR of Covid in the UK is 2.1 per cent, compared to a CFR of 0.1 per cent for the seasonal flu given by the US’s Center for Disease Control (CDC).

In other words, Covid’s CFR is 21 times higher than the seasonal flu, and more deadly for all age groups except, possibly, pre-teen children. Covid is also much more infectious than the flu, according to the CDC, so outbreaks will infect more people with this much-deadlier virus. And, as the FT’s John Burn-Murdoch demonstrates, Covid has already caused far more hospitalisations than even the worst flu seasons, and that is against the backdrop of unprecedented social distancing measures.

[See also: Get the latest data on Covid-19 where you live with the New Statesman’s tracker]

Myth 3: We’re witnessing a “Casedemic” of false positives from doing too many tests

This claim does not explain why Covid cases have risen and fallen independently of testing rates during the pandemic, or why hospitalisations and deaths have risen in line with the rise in positive Covid cases (which is hard to explain if false positives were a significant issue). Moreover, other countries with major testing programmes have not seen waves of false positive tests that believers in this theory claim are inevitable. South Korea, which controlled and suppressed its Covid outbreak, has done more than five million tests to date and only found 73,918 cases in total. And even if this bogus claim were true, it would merely force us to conclude that Covid was much deadlier than we believe it to be, since we would have the same number of deaths from a much smaller number of cases.

The various ways of counting Covid deaths may be confusing, but it is indisputable that we are seeing significantly more deaths during this pandemic than we have in previous years. There were around 604,000 deaths registered across England and Wales in 2020, 73,000 deaths (14 per cent) higher than the baseline from the previous five years. 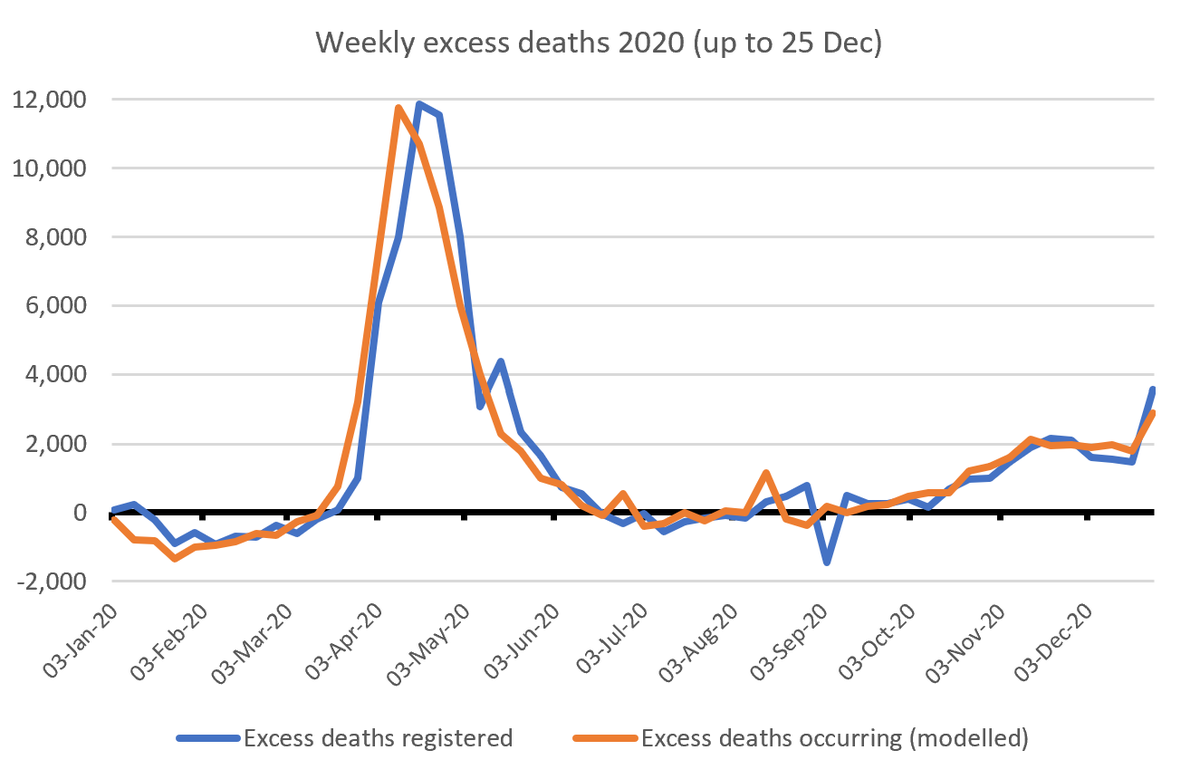 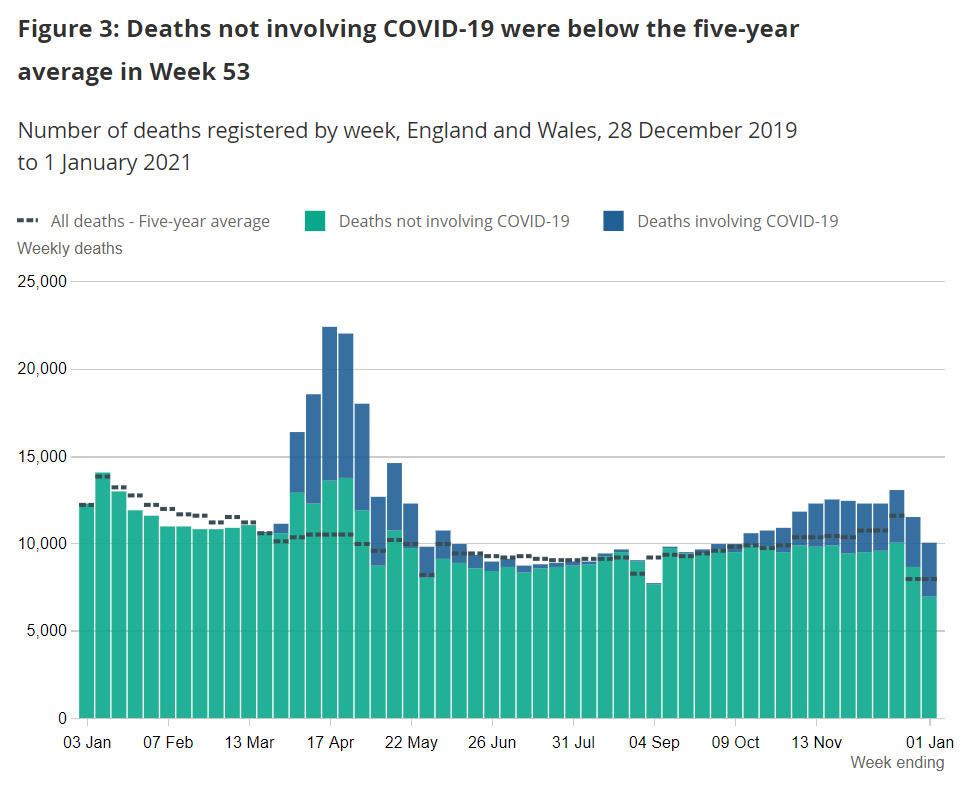 Myth 5: Lockdowns don’t reduce cases, as cases are falling before they are imposed

The main basis for this claim is that cases on self-reporting apps such as Zoe seem to fall before lockdowns are implemented, but the people who diligently report their symptoms daily for these apps may not be representative of the wider population. According to more representative surveys, lockdowns have always been the point at which rising cases have begun to fall. The ONS infection survey shows that the infection rate in the UK on 18 December 2020 was one in 85, and this rose to one in 50 by 2 January 2021. It was only after this point, when a nationwide lockdown was imposed, that cases began to fall. 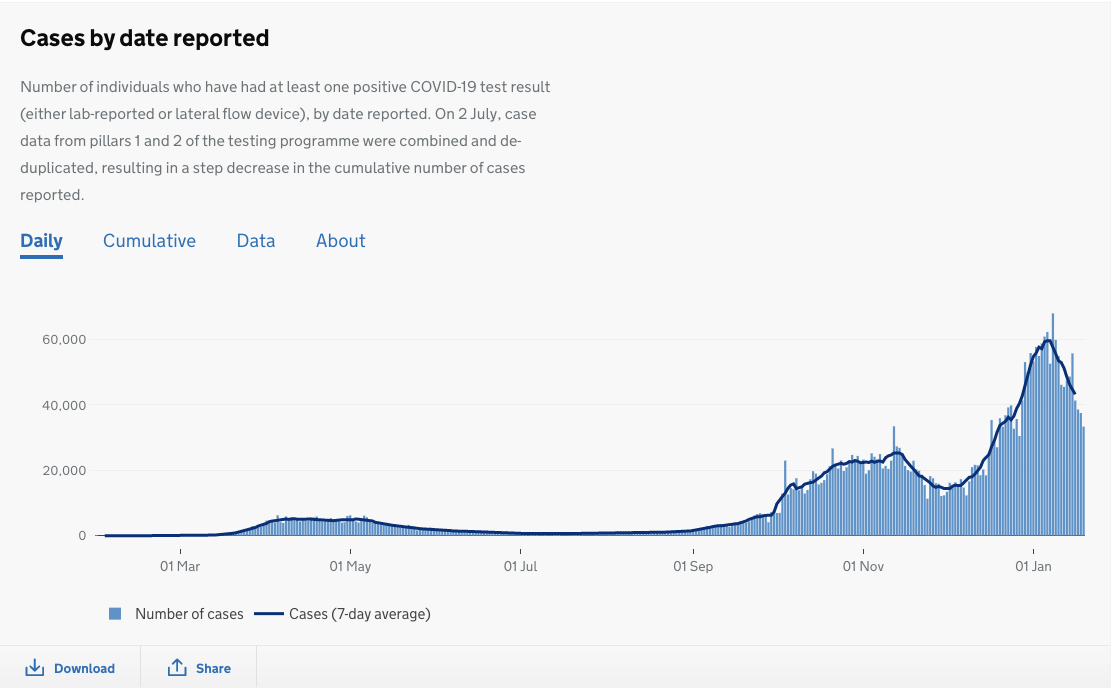 The same is true for the November and March lockdowns, with one study concluding that, if lockdown been introduced a week earlier in March, it “could have reduced the first wave death toll from 36,700 to 15,700… while delaying lockdown by a week would have increased the deaths to 102,600”.

This analysis from November looks at over 200 countries and finds that national lockdowns are at the very top of the effectiveness table. Another paper found that “closing all educational institutions, limiting gatherings to ten people or less, and closing face-to-face businesses each reduced transmission considerably”.

Myth 6: Lockdowns lead to a rise in suicide and self-harm rates

There has been no statistically significant rise in suicides after lockdowns were imposed in the UK, and nor has there been a recorded rise in rates of self-harm. This is true in most countries that have been studied that imposed lockdowns: studies in Germany, Norway, the US, and Victoria, Australia (which had one of the world’s longest lockdowns) all show either no increase in suicide rates or a reduction. A recent study showed that suicides did rise significantly in the second half of 2020 in Japan, but Japan has not imposed lockdowns, so it may be the pandemic rather than lockdowns that has contributed to this.

This is not to suggest that the pandemic has not had an impact on mental health. However, claims of an increase in suicides and self-harm are unsubstantiated, and mental health deterioration is just as likely to be a consequence of the pandemic itself as of lockdowns.

[See also: It’s not just you: Why the current lockdown is having an extreme effect on mental health]

Myth 7: We could just isolate the most at-risk and let everyone else get on with their lives as normal

This is the proposal of the Great Barrington Declaration, published in October by three epidemiologists, which suffers from a number of problems. The first is how to look after the 15 million at-risk people in the UK who would have to self-isolate for months, unable to go to the shops to buy food or visit a GP’s surgery for medical care, because the virus would be so widespread among the rest of the population.

The second is that many, many people in the wider population would be hospitalised with Covid: applying the hospitalisation rates estimated by the British Medical Journal, if 50 per cent of the younger population caught Covid along with 5 per cent of pensioners, that would mean an estimated 860,000 people would be hospitalised. That would completely overwhelm the health service – there are only 4,123 adult critical care beds in England. The “benefits” of this approach are also unclear, since many businesses would struggle to function with mass staff absences due to illness and customers afraid to enter their shops. Now that we have vaccines and rollout is under way, this strategy seems redundant.

Myth 8:  Misinformation from prominent figures in academia and the media

Anti-Virus has documented claims and points of view from prominent figures in academia and the media that have now been proven not to be credible.

Sunetra Gupta, a professor of theoretical epidemiology at Oxford University, claimed in March that half the UK’s population had already been infected by coronavirus, a claim which has now been disproven. In May, Gupta said that the IFR of Covid was “closer to one in 10,000“; by this point, more than one in 10,000 of the UK’s entire population had died of Covid.

Journalists including Allison Pearson and Toby Young have consistently criticised the effectiveness of a national lockdown. Last week the press regulator Ipso ruled that Young wrote a “significantly misleading” column in the Daily Telegraph in July 2020, when he claimed that the common cold could provide “natural immunity” to Covid-19 and that London was “probably approaching herd immunity”.

Sam Bowman is director of competition policy at the International Centre for Law and Economics, a senior fellow at the Adam Smith Institute, and one of the founders of Anti-Virus.

[See also: Britain currently has the worst death rate in the world but the number of new cases each day appears to be falling]