One evening last week, Catherine Usiskin set off as usual to take her two dogs out for a night-time walk on Primrose Hill, a park in north London she has lived beside for 40 years. But she found the park closed. Instead, she had to walk around its perimeter.

“We weren’t told, there were no notices, all of a sudden I’m locked out of the park with no idea,” says the 70-year-old jeweller. “It felt offensive that nobody had come to tell us, or ask us our views about closing it.”

We meet on Primrose Hill, the only Royal Park in London open at night, during a weekday afternoon. Someone is flying three vibrantly coloured parrots around the park, to the cooing of schoolchildren. Usiskin, sitting on a fallen tree at the foot of the hill, is one of around 1,300 people opposing the closure of Primrose Hill at night – a temporary measure introduced last weekend via metal barriers to close the park from 10pm onwards on Friday, Saturday and Sunday nights.

Many of the park’s users are constituents of Keir Starmer, the Labour leader and MP for Holborn and St Pancras – home to Primrose Hill. As a rare 24/7 park, it has become a haven for students, young people and locals with nowhere else to socialise or exercise during lockdown.

Chemical pollution threatens life on Earth. What are the solutions? 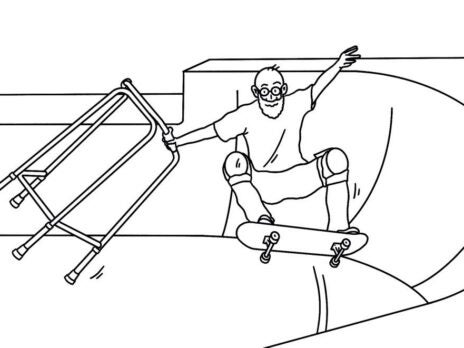 This England: Age is no limit

Subscriber of the Week: Matthew Harrison

However, Starmer’s constituency office has been receiving reports of drug taking and dealing, defecation in surrounding council estates and private gardens, big gatherings in the park with sound systems, vandalism of local businesses, and even violence against local residents.

The New Statesman understands that this is one of the highest single community issue correspondence rates seen by the Labour leader’s constituency team.

As complaints about loud parties and anti-social behaviour in the area mounted, Starmer has been trying to find a solution.

A few weeks ago, the local police began clearing the park at 10pm, but this was not deemed sustainable at a cost of around £800,000 per year.

Two days after a video call organised by Camden Council with some residents, ward councillors and local police on 12 May, Starmer had a call with Royal Parks management in which he supported the suggestion – employing the new language of lockdowns – of a “circuit breaker” in the form of temporary gates.

A spokesperson for the Metropolitan Police says:

“Over the past year during the national lockdown, the Metropolitan Police Service’s Central North Policing Command has responded to calls from concerned residents living around Primrose Hill citing issues with general antisocial behaviour…

“To prevent people from further misusing the park, the Royal Parks have put in place a temporary closure of Primrose Hill between 22:00 and 06:00. In order to ensure that the park remains secure during this time, Royal Parks have installed temporary gates and the Central North Policing Command is working with the dedicated parks police units in order to test the effectiveness of this measure.”

First erected last Friday (21 May), these gates will close the park at 10pm on weekend nights, though it is unclear for how long they will be used.

A spokesperson for the Royal Parks says:

“We are continuing to work closely with the police in their duty of enforcing the law. As a short-term measure to support them in breaking the current pattern of anti-social behaviour at Primrose Hill, we have introduced temporary fencing at the park gates over the next few weekends, after the police have cleared the park.”

“This weekend, the park will be closed from 10pm on Friday, Saturday, Sunday and Monday. We will keep the situation under review.”

Yet Nick Biddle, the park manager of Primrose Hill, queried the efficacy of gates in an April webinar. “It may appear putting gates on Primrose Hill park would solve a number of problems… [But] our view is that the current levels of appalling behaviour are very much driven by the pandemic and we feel making such a radical change would be questionable if this is a temporary problem,” he said.

“Having the hill open 24 hours a day has a huge community value, provided people can play nicely and behave like reasonable people.”

He also made the point that the Metropolitan Police’s Royal Parks unit suffered “swingeing cuts” – particularly in 2015 – which reduced numbers from 140 officers down to 80 across all the parks, and their policing of the parks was limited to 7am to 10.30pm.

“There is a real logic in trying to stop the cycle of people coming thinking it’s a free venue for a certain period, but only if it’s met with a load of other measures like actually policing the streets around it,” says Amy McKeown, a 40-year-old mental health worker who has lived in Primrose Hill for 20 years. “Otherwise we could see permanent barriers.”

McKeown is concerned that those who work nights will lose out.

“Key workers, who have kept the country running for the last year, often work shifts. There are many physical, mental, practical reasons why people would actually use the park in the early hours of the morning. A temporarily badly-behaved minority should not be the reason that we close an amenity that’s used by the community.”

Another resident opposing the gates, 39-year-old James Broomfield, who works in advertising and grew up in the area, tells me he used the park at night to help his baby sleep.

“My daughter is one now – when she was in that period where she’d be awake for three hours in the middle of the night and someone would have to take care of her, I’d strap her on and go for a moonlight walk and it was wonderful.”

McKeown, who organised a petition against the closures, first heard the idea of erecting gates in a letter distributed by local Conservative councillors ahead of the May elections. The New Statesman has seen this letter, which states:

“We believe gates should be installed and the park closed at night, as Regent’s Park is, at least until this trouble is contained.”

She and her fellow local campaigners were therefore surprised that the Labour leader ended up backing the plan, particularly after they read a MailOnline report that framed the debate as a class issue, with the headline: “Well-heeled residents surrounding Primrose Hill demand it be fenced off to stop ‘noisy yobs’ taking over the Grade II-listed Victorian park for loud night-time parties.”

Primrose Hill has an affluent reputation and associations with London’s rich and fashionable.

“You think Primrose Hill, you think Kate Moss and Jude Law and the Primrose Hill Set,” says McKeown. “What people don’t realise is that there’s more social housing in Primrose Hill than that, so actually it’s a complete own goal for him [Starmer] to agree to put up fences on Primrose Hill when you’ve just lost the Red Wall and you’re being accused of pandering to the metropolitan elite!

“It’s an unusual policy decision, for someone building his reputation on being a man of the people but also a forensic inspector of all evidence.”

The story of Primrose Hill has led to Starmer being characterised both as backing wealthy homeowners and jeopardising his support from the “metropolitan elite”. Evidently, the perceived class and political divides in this dispute are not clear-cut.

Labour councillors have also publicly backed the idea of gates, for example, and Camden New Journal crime reporter Bronwen Weatherby has reported on concerns from social housing residents and people in sheltered accommodation, as well as those who own expensive houses.

A resident whose house is on the park (who prefers not to be named) – one of a number in private houses and council flats with private access to the park – tells me she opposes the closures.

“I have a five-year-old and a three-year-old boy, and in 12 years, they’re going to be 17- and 15-year-old boys, and I want them to be able to have a place at midnight to go and sit down, and not force them into a dingy bar, or spend a lot of money in a less healthy space,” she tells me.

“I’d so much rather have them meet their mates for a couple of beers on the top of Primrose Hill.”

She adds that the park is a “free resource”, saying concerns about her comfort as a resident should not “come at the cost of denying thousands of people across the neighbourhood a resource required for their well-being – that’s morally wrong.”

Indeed, the decline in public space exposed by pandemic lockdowns is an issue of inequality. The Fields In Trust charity’s latest Green Space Index (launched this week by the Duke and Duchess of Cambridge) shows some parts of Britain have access to half the green space that others have.

Seven of the nine English regions do not meet a minimum standard of green space provision as measured by the Green Space Index, and while both Scotland and Wales do meet this benchmark, their scores have both fallen over the last year.

Areas with the least access to green space “tend to be those with a higher incidence of deprivation – precisely the communities who benefit most from green space access”, according to the findings of the Index.

A key cultural divide in the era of social distancing has emerged between those with enough private space for exercise, working from home, and sitting in the sun – and those without.

“Over the course of the pandemic we have seen a significant increase in the use of parks and green spaces, and changes in the way people interact with these public assets,” says Helen Griffiths, chief executive of Fields in Trust.

“As we are encouraged to avoid gathering indoors, our social interactions have relocated outdoors – including into urban parks and green space, where people are beginning to reconnect with community.”

While she concedes this has created “short-term challenges for landowners to manage this unfamiliar use”, she believes the longer-term solution is to work out ways to accommodate them.

“Once the security and lighting are sorted out, there is no real reason why UK parks shouldn’t also be available for extended use after dark, as places to exercise, relax and connect.”

From the disastrous closure of Victoria Park in east London during the first lockdown to bitter disputes over the sudden closure of roads to motor traffic across England, tensions over the use of public space are increasingly a matter of national politics.

As for Catherine Usiskin, she simply prefers to walk her dogs in the park at night. She has enjoyed seeing young people socialising on the hill during the otherwise lifeless days of lockdown.

“They’re having a good time, the atmosphere is jolly, it’s fun, they’re letting their hair down,” she says. “I walk through them, I go up to the top of the hill because the view is fabulous, after 40 years I still love to go up there. Obviously there are some loud parties going on, but I like it – I don’t want to feel old!”