Curiously my father, Georgiy Gongadze, an icon of Ukrainian journalism, was born not in Ukraine but in Tbilisi, the capital of Soviet Georgia, in 1969. In the early 1990s he became a youth activist, travelling through the newly independent states of the former Soviet Union. He ended up in Lviv, in western Ukraine, where he met my mother, Myroslava, a young woman who, like him, was testing the new-found freedoms of the era to practice independent journalism.

The couple began to make their names as broadcast journalists who reported on the relationships between Ukraine’s political class and its oligarchs, the new class of shady biznessmeni who had accumulated obscene wealth in the fire-sale privatisations that sold off swathes of Soviet industry after the USSR’s collapse.

His fearless journalism earned him powerful enemies, however, and 20 years ago this month my father was brutally murdered, his death linked to the very highest echelons of politics. The scandal shocked the country and helped galvanise the fight against corruption in Ukraine. Today, on 16 September, as we mark the anniversary of his disappearance, his name remains a rallying call for democrats in the country who are continuing his mission.

Newly independent Ukraine felt like a promising place, but within a few years a culture of dirty deals, corruption and illiberalism had emerged. Oligarchs had begun to infiltrate the government under the then president Leonid Kuchma. Those in power did not take kindly to the scrutiny of the handful of independent journalists operating at that time. 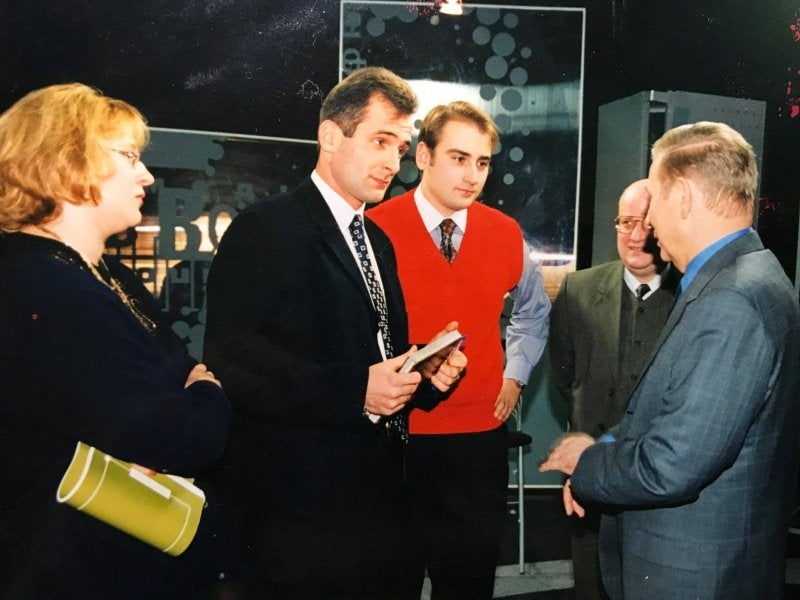 Giorgiy Gongadze speaks to the then president of Ukraine Leonid Kuchma before a TV interview. (Photo courtesy of the Gongadze family)

A few video recordings of Gongadze’s TV interviews, including one with Kuchma, survive. They show a dogged, expressive young interviewer with a deep voice and a hairline just starting to recede. In one, he confronts the surly president for failing to adequately investigate a high-profile assassination attempt. He challenges Kuchma about keeping on an interior minister who could not find the perpetrators of the crime, telling the president that, “you are covering up for incompetence”.

Even while only a tiny proportion of Ukraine’s population had access to a computer, let alone internet access, Gongadze saw the possibilities the web allowed for a free and independent media that did not depend on patronage from oligarchs or the government. In 2000 he created the news website Ukrainskaya Pravda (the title means “Ukrainian Truth,” an ironic wink to the old Central Committee mouthpiece of the same name).

Somewhere between all of this I was born, one half of a pair of twins, in 1997.

By mid-2000, my mother recalls, the couple began suspecting that their Kyiv flat was being watched. My father would return to it nervously, reporting being followed by shady-looking figures. He complained to the prosecutor’s office, alleging he was being monitored and demanding an explanation. They ignored him.

Georgiy Gongadze went missing on the evening of 16 September 2000. One of the last things he ever did was give to his children an English lesson. He wanted us to grow up multilingual like himself, able to communicate in countries where journalists were free. Weeks later, a headless corpse was found in a forest near Kyiv. The body was identified by distinctive jewellery and evidence of injuries Gongadze had sustained as a film-maker covering the war in Abkhazia, a breakaway region of Georgia.

The official version of events was contradictory and obfuscated. It took a month for the authorities to accept my family’s demands to see and identify the body and for the death to be officially treated as a murder. Despite having done everything possible to push for a genuine investigation, my mother got nowhere.

In the autumn of 2000, recordings were leaked suggesting a possible conspiracy to kidnap Gongadze, in which Kuchma was implicated. They prompted massive anti-government protests and the “Cassette Scandal” significantly weakened the president’s position. (In 2011, the prosecutor’s office initiated criminal proceedings against Kuchma, who has always denied any involvement in the killing, but the charges were later dropped.)

The surveillance never let up, even after Gongadze’s murder, my mother recalls. She was followed and continued to suspect that the flat was wiretapped. She had no one to turn to: when the authorities themselves are threatening you, there is no authority from which to seek protection.

Four years after my father’s murder, crowds packed the Maidan square in Kyiv in the so-called Orange Revolution. They were protesting alleged vote rigging in that year’s presidential election and the poisoning of liberal opposition candidate Viktor Yushchenko. Protesters held up likenesses of Gongadze to emphasise how my father’s death symbolised the rot that had taken hold in Ukraine. In the Euromaidan protests almost a decade later, many of those on the streets were from a new, younger generation that had no memory of the time and circumstances of father’s murder. But they are his spiritual heirs.

[See also: Ukraine’s Volodymyr Zelensky cannot be a servant of the people and of oligarchy]

My family eventually left Ukraine, emigrating to the United States after we were granted political asylum. I was three years old. We lived in a one-bedroom flat in a suburb of Washington, DC and spoke no English. I remember helping my grandmother salvage furniture by digging around in the rubbish behind our block.

My mother would often travel to Europe, raising awareness about the unsolved case of my father’s death among European allies when Ukraine’s legal system proved inadequate. In 2005 she won a case in the European Court of Human Rights against the Ukrainian government for not adequately investigating.

Given my age at the time, the highlights of these experiences for me were the souvenirs and sweets brought back from the cities she had visited. It was only later that I understood how relentless she had been in fighting for justice, all while supporting a family as a single mother. Growing up, I never felt like I was missing out by having one parent, because my mother was somehow able to give me the love of two. I never saw her weep a single time.

Four perpetrators of the crime were eventually imprisoned in Ukraine, but its alleged instigators remain unpunished. My mother uses the term “partial justice” to describe how the legal system dealt with the case. By this she means that an equitable outcome for my father’s murder is not only a matter of using the legal system to punish everyone involved in the crime. True justice is building the country he fought for, and about eliminating the systems of corruption and impunity that lay behind his killing.

A recurring theme across his journalism was the need for awakening from the slow creep of authoritarianism. In the last few years of his life, he watched his adopted country sleepwalk into a form of sham, illiberal democracy that would soon become a hallmark of the region’s politics. His response was to use every medium he could – radio, television, most of all the Ukrainskaya Pravda website – to raise the alarm. His was the generation that ended communist dictatorship in eastern Europe for good, propelled by a dream for a freer society than that in which their parents lived. 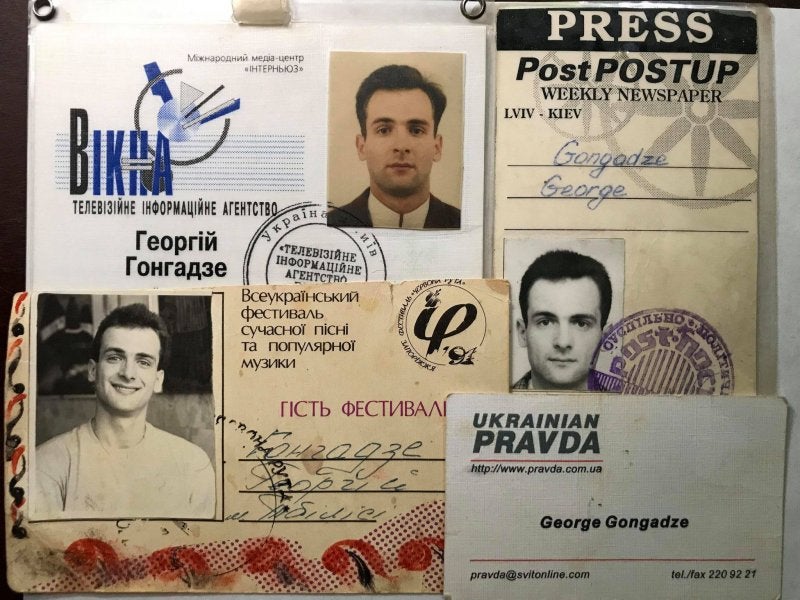 A collection of Giorgiy Gongadze’s press cards. (Photo courtesy of the Gongadze family)

My father’s death galvanised the fight against corruption in Ukraine. Compared to the country of his time, Ukraine today has a vibrant public sphere and mostly free and fair elections. Its media is pluralistic, but still heavily oligarch-owned. There is still much progress to be made. Brave journalists and activists have since taken on Gongadze’s mantle of independent journalism and some, like him, have paid the ultimate price. Some of the perpetrators have never been caught.

Last year’s presidential election was won by Volodymyr Zelensky, a comedian who played the president on TV and then tried his hand at the real thing. He claimed to herald transformative change but his platform offered little substance. After three decades of disappointment, it is understandable why many voters were attracted to those promising that they would quickly fix the country’s many problems.

Frustratingly, members of the same class of oligarchs and politicians that my father made his enemies have found new ways to insert themselves into Western politics. Americans following the impeachment proceedings against Donald Trump may have been hearing the names of those involved for the first time, but for Ukrainians they were very familiar.

[See also: Why the Ukraine scandal could be a pivotal moment in Donald Trump’s presidency]

Increasingly, the rot feels inescapable in the wider world. I have lived now in Ukraine, the United States and the United Kingdom. Illiberalism, polarisation and corruption are no longer problems that happen “over there”. The challenges of building a fairer society sometimes feel insurmountable.

Recently, as the anniversary of his abduction and murder has drawn near, I have been thinking about my father’s legacy. It reminds me that is it always harder to do what is right. Today, as in his time, to fight for the right thing is to struggle. Gongadze was intimidated for his journalism. His work, politically sensitive and upsetting to powerful interests, meant that he was rarely given stable work and found it difficult to provide for his family. The ultimate consequence of his struggle was a family turned into refugees and two children who never knew their father.

My father chose to struggle because he was fundamentally idealistic about how things could be. It is hard for those of us living in so-called advanced democracies, that sometimes seem to be entering some kind of twilight, to recognise the ideal he imagined. We feel foolish encouraging Ukrainians to reform their system when we know how broken our own are.

I will be 23 soon, and I’m starting to look like my father. I have his square jaw and eyes that crinkle up when we grin for photographs. I suspect that if he were still around, he would say we were part of the same fight. He would be proud of the new generation of Ukrainians, who live more freely thanks to his efforts, and carry them forward. And he would remind us not to give up, because he never did.