The streets are running red outside Jair Bolsonaro’s presidential palace. On 7 June a protester hurled crimson paint onto the ramp leading up to the official residence in Brasília, and was hauled away by police as he called the Brazilian president’s response to coronavirus “genocide”. The same day, protesters took to the streets in a dozen cities across the country and beat pots and pans to demand Bolsonaro’s resignation. These demonstrators were “showing their true colours”, Bolsonaro said to his supporters, moments before the paint was thrown.

With the viral pandemic’s effects now concentrated on Latin America, Brazil is in the midst of a crisis. Deaths in the country from Covid-19 topped 1,000 per day for the third day in a row on 20 June, and more than 50,659 had been killed by the virus as of 22 June. As some Brazilian states begin to lift restrictions, others contemplated tightening them again as hospitals approached capacity. Brazilians began to return to shopping centres in Rio de Janeiro on 6 June, after the state governor lifted some restrictions, and a football match between the Bangu and Flamengo teams went ahead – albeit with empty stands – in the city’s famous Maracanã Stadium on 19 June.

In the past several months, Bolsonaro has gone through two health ministers, one of whom was fired and the other resigned – both after criticising Bolsonaro’s response to Covid-19. In the now rudderless Ministry of Health resignations are cascading down to the secretary level. The crisis has become so acute that even the numbers of coronavirus infections and deaths reported by the ministry are suspect. After 8 June, when the government reported two contradictory Covid-19 death tolls, the World Health Organisation (WHO) issued a plea for transparency, and the country’s leading newspapers took to reporting their own statistics.

Why is Brazil being hit so hard by the virus? To most Western observers, the answer is clear and lies in the form of a familiar bogeyman, Bolsonaro. There is ample reason for this: he has consistently downplayed the risks of the virus, long after equivalent denialists such as Donald Trump ceased doing so. He has wreaked chaos in his health ministry, refused to institute nationwide lockdown measures and criticised state governors who did lock down. He has also relentlessly touted unproven medications, and encouraged and participated in maskless, close-quarters rallies – though it may be noted that this has also become a more acceptable activity in the West in recent weeks.

Some have imagined what a coronavirus response might have looked like under Lula da Silva, a former left-leaning president of Brazil during the 2000s who remains much admired abroad. Nationwide lockdowns might have accompanied higher investment in the national health service, while the economic impact could have been cushioned via direct payments to families, through the pioneering model of Lula’s social programmes.

But can we be sure of such a rosy outcome in this imagined world? Lula was sworn to maintain fiscal discipline and the money he spent on welfare measures was the gift of a commodity boom during the mid-2000s, which has long since passed into history.

One need not support the extreme position of the Bolsonaro government to realise that the question of lockdowns is a different one in developing countries, where social-distancing solutions like remote work are more difficult to implement – as research from the London School of Hygiene and Tropical Medicine has attested. Brazil is a middle-income country, somewhere between the developing world and the rich world, but home-working remains an impossibility for much of its informal sector.

Many of the factors that made Brazil particularly susceptible to Covid-19 – a fragile social support system, an overcrowded prison population, and a highly urbanised society with the upper and middle classes living in high-rises and the poor often in intergenerational households – do not wax and wane with presidential administrations.

It is true, however, that Brazil’s neighbours, many of which share these underlying societal conditions, have escaped the brunt of the virus. Uruguay, a country of 3.5 million, has registered a mere 24 deaths, while Argentina and Chile have had comparatively low levels of mortality relative to their size. But Brazil’s per-capita death rate is not dissimilar from that of Ecuador – where the coastal city of Guayaquil was hit early and hard. Mexico, which is governed by the left-populist Andrés Manuel López Obrador, has a population of 128 million to Brazil’s 212 million, and about half of Brazil’s death toll.

According to a 30 May poll, Brazilians are now split evenly down the middle on the question of whether Bolsonaro should resign. A third remains resolute in its support of him, which is about ten points lower than Trump’s average approval in the US. As Bolsonaro rode into a pro-government demonstration on 31 May on the back of a brown stallion, his supporters hailed him as a latter-day world spirit on horseback, dedicated to his mission of fighting “communists” in the WHO or the country’s Supreme Court. But to his detractors, he was a horseman of the apocalypse, reminiscent of Caligula more than Napoleon. 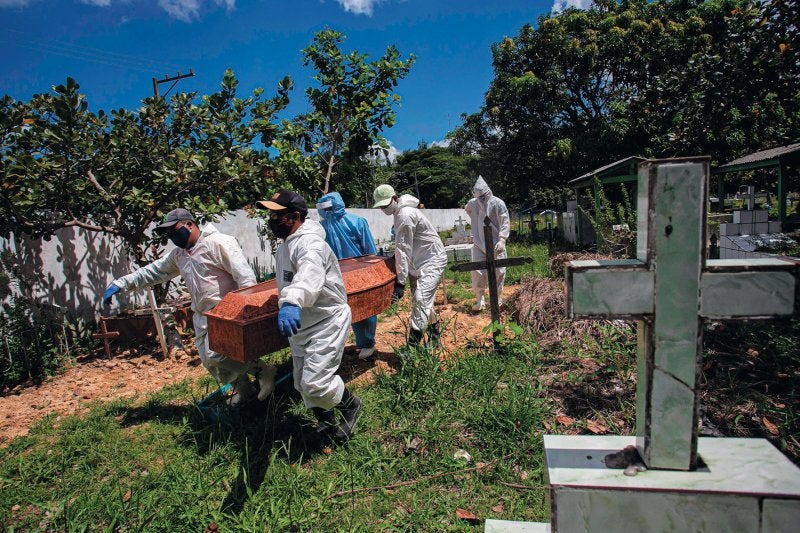 Many have noted the similarities between Trump’s response to the viral pandemic and Bolsonaro’s markedly more extreme one. Both have repudiated international organisations such as the WHO: Bolsonaro suggested on 5 June that Brazil might follow the US in withdrawing from the organisation. Both presidents have alternated between demanding an end to lockdown measures and shifting responsibility for the response to the virus to state and local authorities. What has gone less remarked upon is that Brazil’s slow-burning political crisis has an American flavour too.

Scholars and political analysts often speak of a “battle of the powers” between Brazil’s presidency, Congress and Supreme Court that has been ongoing since 2015. Before Bolsonaro’s election, Congress impeached the president Dilma Rousseff in 2016, while the Supreme Court blocked presidential cabinet picks and suspended the speaker of the lower house. Each of the three powers – legislative, executive, and judicial – used its prerogatives as a cudgel against the others. The resulting chaotic cycle of recrimination resembled nothing so much as a nightmare version of the “checks and balances” that such division of powers is supposed to provide in liberal-democratic countries.

Into this unsettled landscape stepped Bolsonaro in January 2019 – a man whose sympathies have long lain more with Brazil’s armed forces than the institutions created by the 1988 constitution. In recent weeks Bolsonaro has said nothing against his supporters when they hoisted in front of him banners that demanded military intervention or which attacked the Supreme Court.

The testy relationship between Bolsonaro and the Supreme Court has increasingly teetered towards open contempt. Bolsonaro himself tweeted on 30 May “everything points to a crisis” between the presidency and the court, and the Supreme Court’s president told Bolsonaro on 8 June to drop his “dubious attitudes” towards democracy. Bolsonaro will have a chance to make his own mark on the court when a vacancy is scheduled to open in November.

Bolsonaro’s appointee will likely reflect his worries about a trio of judicial time bombs. His former star justice minister, Sérgio Moro, has alleged that he attempted to replace the head of Brazil’s federal police with a loyalist in order to scuttle investigations targeting the president’s sons. In an explosive development, Fabrício Queiroz, a close aide of Bolsonaro’s son Flávio, was on 18 June arrested under suspicion of having run an illegal slush fund in the Rio state legislature.

There is also the Supreme Court investigation into fake news dissemination schemes intended to influence the result of the 2018 election. A small but real possibility is that the Supreme Court could choose the nuclear option, and use its investigation to void Bolsonaro’s election victory. There is little doubt that this would result immediately in a full-blown constitutional crisis, as Bolsonaro would almost certainly refuse to yield his mandate.

The irony is palpable. In a country famed for its jeitinho Brasileiro or “Brazilian way” of finding innovative and sometimes unscrupulous ways of resolving potential crises before they detonate, a modus vivendi in Brazilian politics seems more out of reach than ever.

But then again, perhaps the current state of affairs is itself a kind of equilibrium, however unstable and erratic. The education minister, Abraham Weintraub, resigned on 18 June after attacking the Supreme Court. His quick departure from office seemed to indicate some desire on Bolsonaro’s part to achieve a degree of rapprochement between the powers. It is not impossible that what looks to outsiders like a state on the edge of a breakdown may simply be the way that Brazilian government now functions – though the shadow of the military remains a long and ominous one over Brazilian politics. In 1964, a US-backed coup brought Brazil’s armed forces to power. A brutal military junta then ruled the country for 21 years.

Even as the public health situation deteriorates and protesters take to the streets to demand Bolsonaro’s removal, some economic indicators have improved, while political bargaining intended to keep Bolsonaro in power continues. Stocks on the São Paulo exchange have risen slightly in recent days after steep drops in March and April, and the value of the national currency, the real, has appreciated against the US dollar after the exchange rate spiked from around 4:1 in January to almost 6:1 in May.

But other indicators remain grim: the World Bank, for example, has projected Brazil’s GDP will shrink by 8 per cent this year. Bolsonaro’s economy minister Paulo Guedes is a belt-tightener by nature and opposes stimulus measures to boost the pandemic-hit economy. Actions to support businesses by Brazil’s central bank have so far been limited in scope, and are hampered by the extent of Brazil’s informal economy.

Yet Bolsonaro’s attempt to seal an alliance with power brokers in Congress, to protect himself from impeachment, seems to be progressing. The Centrão or “Big Centre”, a morass of clientelistic parties in Congress, has placed a number of its associates into positions in cabinet agencies in recent days. This is an indication that an agreement has been reached for a form of confidence and support – of patronage jobs in exchange for votes against impeachment, should it come to that. It also indicates what has become of Bolsonaro’s early promises to reject this form of Brasília horse-trading.

After vowing to put an end to the “old politics”, Bolsonaro has instead offered more proof that all roads in Brasília lead to the Centrão. And what the Centrão gives, the Centrão can take away: since there is no modicum of principle or of loyalty involved, the support Bolsonaro counts on in Congress could easily evaporate should the situation worsen – just as it did for Dilma Rousseff in 2016.

From a presidential system and the separation of powers, to a Trumpian pose against coronavirus – not to mention a law enforcement system that kills citizens at an alarming rate – Brazil seems to have imported a number of US political institutions and habits, only to encounter challenges in implementing them in a Brazilian context.

But in the wake of coronavirus many Brazilians may feel well disposed to at least one American importation. Federalism has allowed governors and local authorities in Brazil to fill the vacuum of governance left by the federal Ministry of Health which, faced with the direst public health crisis in a century, did not so much fail as disintegrate.

This article appears in the 24 Jun 2020 issue of the New Statesman, Political football