WASHINGTON, DC – “We’re all pandemic reporters now,” a friend and former colleague of mine half-joked a few months into 2020 as Covid-19 spread across the globe. And for much of that year in the US, it felt true. It felt less true in 2021. The pandemic was in the headlines, and then it wasn’t. Journalists spent time on issues such as foreign policy, the withdrawal from Afghanistan, the economy and climate change. There were weeks where, if I am honest, I didn’t report or write on the pandemic at all.

Other parts of the world scrambled to get vaccines, but not the US. We had enough for everyone. We had boosters. Our restaurants were open, and our concert halls too.

In late November, my husband and I went to my parents’ apartment for Thanksgiving. News broke that a new variant had been detected in South Africa. A few days later, a friend and I went to a concert. We showed our little vaccine cards and were allowed in. A few days after that, my husband and I made plans to travel to our families’ homes for the holidays. We emailed friends to invite them to a New Year’s Eve party at our place. Meanwhile, I pitched a piece about how the pandemic was still the big story of the year, because amid everything else, 800,000 Americans were dead.

Omicron, the latest highly transmissible variant, was in the US before all this happened, but it was only the week before Christmas that my Twitter timeline filled with people in New York and in Washington, DC saying that they had tested positive. Washington, DC now has one of the highest Covid-19 case rates in the nation. The city set up testing sites, the queues for which went around the block. Pharmacies ran out of rapid tests; President Joe Biden announced in late December that the government would send out half a billion tests. 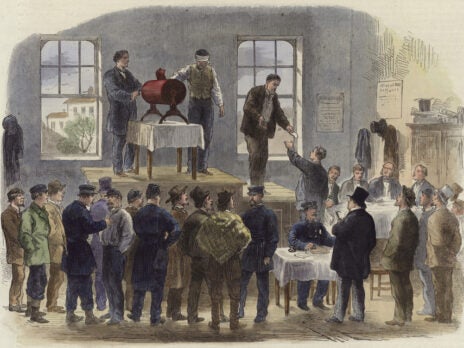 The forgotten politics of personal sacrifice

“I know you’re tired,” Biden said in an address on 21 December. “And I know you’re frustrated. We all want this to be over. But we’re still in it. This is a critical moment. We also have more tools than we ever had before. We’re ready. We’ll get through this… keep the faith.”

My husband and I cancelled our holiday travel. We did not see how we could get from Washington to New Jersey to New York and back again without getting our families or ourselves sick. I heard from one friend and then another that, after two years of avoiding infection, they tested positive for Covid. We all will, experts now say. I cancelled my New Year’s Eve party. We may all get Covid, but that doesn’t mean my friends need to get it in my home. I read tweets – always a mistake – suggesting that anyone who is boosted and doing anything but living normally is paranoid. I read this and think of how much I would like to hug my mum and dad and feel like crying. I thought about how we told ourselves that we would be together as 2021 became 2022. I wouldn’t bother making a prediction about next New Year’s Eve, or what the state of the pandemic will be at the beginning of 2023.

Across the world, Israel rolled out its fourth vaccine dose for the elderly. Millions of people went into lockdown in China. A report on the new variant from the UK found that vaccination works to protect against hospitalisation and serious illness. Meanwhile, case numbers are plunging in South Africa. It’s given me reason to hope. I can be a little more careful for a few weeks, and then maybe case rates will fall here too. I try to imagine the relief that is felt in South Africa, the citizens of which spent several weeks banned from entering the US, a travel ban that did not, in the end, stop Omicron from circulating here.

All of which is to say that Covid was the story of the year again. I just didn’t fully understand that until the year was almost over. Because I had forgotten, again, what I’ve learned over and over again during this pandemic: that so long as coronavirus is a story for some people, it will be a story for all of us.

[See also: How the battle against Covid became a forever war]