It is 6am, and the worker in white overalls places the delicate bones of a human hand in a brown paper bag.

A jaw, with teeth still intact falls to one side. Blue boots lie twisted into the ground.

The team of seven gently place the bones and the clothes – what’s left of a human life – in a black body bag. They take it to the freezer van.

The workers set about gently removing the next body. They’re at “mass grave number 15”. A grimy red and white kuffiyeh – the chequered scarves worn across the Middle East. A pair of khaki trousers. A spine falling from the dead man’s sleeveless jacket. 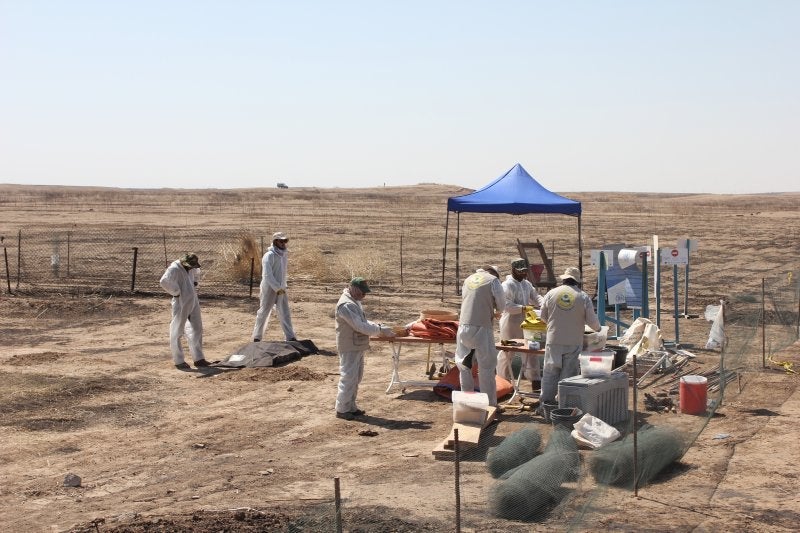 These are some of the victims at Kojo, a Yazidi village once home to 300 families south of Sinjar city in north-western Iraq. The land that Kojo’s residents, many of them farmers, once nurtured and tilled, became their undignified grave.

Forensics teams have identified 17 mass graves containing victims of ISIS around Kojo, some of the 202 across Iraq in territory formerly under the terror group’s control. Since exhumations began at Kojo in March, the team, among them a crime scene manager, a forensic photographer, a chemist and forensic anthropologists, has removed 235 sets of human remains.

The sun climbs higher in the sky and the team move onto “mass grave number 16.” Tinder-dry long grass rustles as the team clears its long fingers from the soil.

Local Yazidi paramilitaries patrol the site, assault rifles slung across their chests. They defend shallow graves: Isis didn’t dig proper burial places for its victims, but shot them dead and left them on the earth’s surface. The watchmen are the only people left in Kojo, which lies abandoned.

Looking on is Idriss, one of the only survivors of the militants’ rampage in Kojo. He saw his 19-year-old son and his brother, Ameen, shot dead at mass grave number 16, but managed to play dead for long enough to escape. Now displaced in Iraq’s Kurdish region, he has returned to witness his former neighbours and friends being dug from the ground. He feels he can’t return to live here any time soon, in part because it has been damaged and destroyed, but also because he feels betrayed by Arabs from the surrounding villages. Some of them joined Isis’s ranks.

“They were Iraqis from the Arab villages just around us,” he said of the militants who invaded Kojo in August five years ago. “It is not possible to deal with someone who has been your neighbour for 40 years, you know each other, exchanging greetings and sharing food, and then they come to kill you in half an hour. No.”

Kojo’s mass graves, though, are just a tiny fraction of these undignified burial places – defined as a grave containing six bodies or more – across Iraq. While 202 have been counted in territory held by Isis, no one knows how many there are across the country as a whole, thanks to political divisions, ongoing conflict and a lack of resources for exhumations.

Generations of conflict and oppression – including the 1980-1988 Iran-Iraq war, the post-2003 civil war, and massacres of Kurds and Shia Muslims by Saddam Hussein’s regime –have caused countless Iraqis to disappear. Again, no one knows exactly how many people are missing, although estimates run into the hundreds of thousands.

The Yazidis have yet to start receiving the remains dug up from mass graves like those at Kojo, for proper burial and something resembling closure. Survivors have given blood samples for DNA matching with the exhumed mortal remains. But the whole process will take months or years to carry out.

Victim identification is frustrated by the sheer scale of Isis’s attack on the Yazidis, which the UK Government recognised as a genocide in 2016.

Isis killed and kidnapped so many people that forensics teams are struggling to find enough survivors to do thorough DNA matches with exhumed bodies.

Normally, they take blood samples from three “first-degree” relatives: a mother, a father, a sibling, or a son and daughter.

But in Sinjar specifically, this hasn’t been possible.

“Most of the family members were missing, with only one survivor,” Dhurgham Kamil Abdul Majid, co-director of the exhumations team, told New Statesman.

“In one case, the survivor was a child who gave a blood sample for 11 of his missing family members.”

Idriss has given samples to try to identify his dead relatives.

On February 5 this year, the family of Mortada Hussein Abed al-Shouaily received their son’s remains in a black bag with his name written on it. The family, from a poor village south of the Iraqi capital Baghdad, had known nothing of his fate for five years.

The 22-year-old was among some 1,700 Iraqi air force cadets massacred by Isis when the terror group attacked Camp Speicher, a military training base inside Saddam Hussein’s former presidential compound on the outskirts of Tikrit city, 175km north of Baghdad. Their deaths were documented in videos and photos, in one of Isis’s early acts of grisly propaganda.

“We’ve been so anxious for the past five years. We didn’t know what had happened to him; whether he was in the river, valley, or [in the Camp Speicher compound] in the presidential palaces,” said his father Hussein al-Shouaily, 55, a recently-retired Ministry of Agriculture employee. 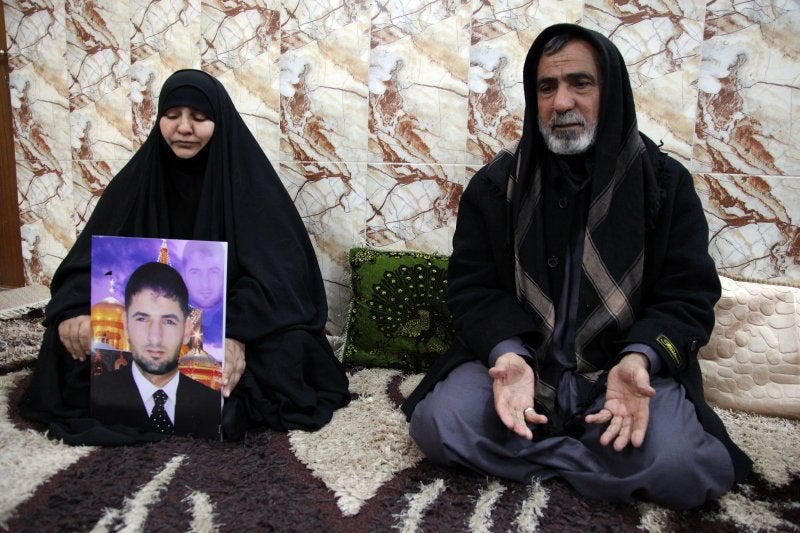 Hussein and Layla al-Shouaily with a picture of their son. Credit: Leila Molana-Allen.

The al-Shouailys buried Mortada at Wadi al-Salam, an enormous graveyard mostly used by Shia Muslims in the southern Iraqi city of Najaf. The family considers itself lucky, as they received a near-complete set of remains.

“His clothes were intact and clean, so we could tell it was Mortada,” Mr al-Shouaily continued, speaking after the annual commemoration event to mark the Camp Speicher massacre on 12 June. “It was rare to receive a body like his. Others only got bones, without clothes. Some only got one or two bones. But we got a full body, thanks be to God.”

Mortada Al-Shouaily’s body is among a thousand from the Camp Speicher massacre that have been returned to relatives for proper burials. But other families of victims from Speicher – and other massacres – are still waiting.

The International Commission on Missing Persons (ICMP), has trained at least 500 Iraqis to help hasten DNA extraction and matching remains with surviving relatives. Representatives accompany the exhumations team to ensure bodies are extracted as carefully as possible.

But the teams are still overworked, and often lack what they need.

Alongside victim identification, Iraqi and international investigators are using mass grave sites to gather evidence of Isis’s crimes in Iraq.

Unitad – the United Nations Investigative Team to Promote Accountability for Crimes Committed by Da’esh/ISIL – started work in 2018, with the remit of “collecting, preserving, and storing evidence in Iraq of acts that may amount to war crimes, crimes against humanity and genocide” committed by Isis.

Human remains, clothes and belongings, and spent rounds from weapons at mass grave sites could all form relevant and important evidence to be used in trials against Isis suspects, international lawyers say.

The hope is that such evidence can be used in trials that meet international standards, which is often not the case in Iraq, where an overly-broad “terrorism” law is being used to convict Isis suspects.

For example, in 2016, 36 men were executed by hanging after being convicted for involvement in the Camp Speicher massacre, but the United Nations said their trials “fell short of international fair trial standards” and Human Rights Watch described them as “flawed”.

“The work of the investigative team cannot simply become a glorified archive; it must primarily lead to fair and independent trials that vindicate the requirements of justice,” Unitad Special Adviser Karim Khan QC, told New Statesman.

The UK government has provided Unitad with £2 million, half of which was announced last month. While current investigations are focusing on Sinjar, Camp Speicher and crimes committed in the city of Mosul, Khan said the extra funding would be used to hire specialists focusing on crimes committed against other communities, including the Shabak and Kakai ethnic and religious minorities.

Khan acknowledged frustration in some Iraqi communities over the slow process of investigating, but said that since Unitad has been conducting “focused, independent and credible investigations” that may lead to fair trials based on evidence.

“I’m saying, ‘Please bear with us,” he continued. “Witnesses may want more – and have a right to more –  but in the long term, if you are candid and don’t over-promise and are seen to be sincere you gradually and surely build trust. I think that is what we are doing.”

Back at Kojo, it’s 10am, and the exhumations team has finished work for the day. It’s already too hot to carry on.

“It’s been really difficult to be involved in the mass graves,” said Abdul Majid, the team co-leader. “Even after all these years, it feels painful every time we dig up a grave.”