I’m standing in a mid-summer downpour in northwest London interpreting for a Chinese dissident novelist and the lorry driver charged with delivering a skip on to the Ma household driveway.

The 65-year-old writer responds and I translate: “Ma Jian says not to worry, there’s plenty of room and you need to make space for his wife’s car.”

The driver nods and proceeds to manoeuvre the vehicle, eventually lowering the skip into roughly the correct place, leaving the garden fence intact.

Ma Jian gestures for me to follow him through the back garden. “Sorry about that. We moved in last year and are still trying to get the house in order.”

He leads me towards his self-designed shed or “book room”, as he prefers. “Come in, quickly. Honestly, I’ll never get used to this weather.”

Twenty years of exile in the UK might not have endeared Ma Jian to the damp climate, nor prompted him to learn English with any fluency, yet there has been a measure of integration. He serves me coffee with milk and biscuits, not the green tea and sunflower seeds I might have expected from a man whose attention remains firmly fixed on the happenings in his homeland.

Ma quizzes me about the country he’s been forbidden from visiting for the last seven years, asking about the wellbeing of mutual writer friends or if you still see Uighurs barbequing lamb on Beijing street corners.

“I’m terribly worried about what’s happening in Xinjiang,” he says of the crackdown in the predominantly Muslim region where up to a million Uighurs and other minorities have been interned in so-called re-education centres. “I visit Uighur friends in London. They cry but they don’t dare call their family members for fear of making them a target.”

Ma is referring to China’s amped-up cybersecurity, whereby officially sanctioned, heavily monitored social media apps enable the Chinese Communist Party (CCP) to eavesdrop on the conversations of anyone they suspect of sedition.

Mass state surveillance is the core theme permeating China Dream, the novelist’s 2018 dystopia, what Ma describes as “a China-specific 1984 […] an Orwellian fable for the Internet age.”

The book tells the story of a corrupt party official, also surnamed Ma, who has been made the director of President Xi Jinping’s China Dream Bureau. Though the bureau is a work of fiction, it represents what Ma terms Xi’s “vague and nebulous” dream of national rejuvenation in a country where “tyrants have never limited themselves to controlling people’s lives: they have always sought to enter people’s brains and remould them from the inside.”

Lead protagonist Ma Daode is haunted by memories of the Cultural Revolution, himself drifting from youthful nightmares to the duplicity of his corrupt existence and the bizarre pursuit of a totalitarian mandate. Awakening from a horror-filled flashback, Ma Daode tries to focus on his arty duty: “We must conquer the fortress of dreams, eradicate all past dreams and promote the new national dream…”

Despite his gloomy forecast Ma Jian dreamily reminisces about better times when the fragile freedoms of the early reform-era prompted Chinese people to “imagine what China could become.”

Born in 1953 in Shandong Province, north China, Ma Jian’s formal education was disrupted by the Cultural Revolution. Despite the tumult of the times, Ma showed early promise in the arts, first as painter and then as a photographer. In the days before market reforms, Ma was assigned to be a propaganda photographer at a petrochemical plant outside of Beijing, a position he held until his photographs won an award and he was transferred to Beijing. In the capital Ma fell in with an underground group of poets, philosophers, painters and the generally discontented. They held secret art exhibitions and met privately to discuss politics or literature, often at Ma’s courtyard house.

“In China in the early ‘80s it felt like a desert where it suddenly rained,” he says. “We learned about Faulkner and Hemingway, we read until sunrise, we read while we peed, we read at work. Three or four of us would share a book. It was a time of ideas and optimism.

“But there was a contradiction at the heart of the reforms. Capital and liberty are intrinsically linked. The UK is this way, the US is this way. But the Communist Party wanted to curtail freedom and develop capitalism at the same time. To do this they made some concessions to the West, giving China a veneer of openness so that money and machines would flow in.”

By the late 1980s this paradox was veering towards the bloody showdown that would play out in Tiananmen Square. Yet rabble-rousing Ma would not witness the fallout first hand. Already a known dissenter he’d been arrested twice in 1983 for his artistic and intellectual activities as part of Deng Xiaoping’s Anti-Spiritual Pollution Campaign. This triggered three years of “long-haired travel” that would provide the inspiration for his award-winning travelogue Red Dust, which was eventually published in 2001.

“I wanted to leave Beijing for a break. I had a relative in Hong Kong and was able to get a single entrance pass from some connections I’d made in the Beijing Public Security Bureau. I left in late 1986. But not long after I crossed the border friends would call me and tell me the police were looking for me.”

Ma was denounced as a “bourgeoisie liberal” after the publication of his novella Stick out Your Tongue in early 1987.

“While in Hong Kong I heard on the news copies of People’s Literature journal with my story in it had to be destroyed.”

Unable to return to Mainland China, Ma was sustained by friends in Hong Kong, a city where he would remain for the next decade. This lesser-known chapter in his life’s journey had a galvanising effect on the author’s outlook.

“People generally view Hong Kong as a commercial place. At the time I arrived it was a British colony. But for someone like me it was a free port. After arriving I had the greatest sense of freedom. Let me tell you, freedom is more important than anything else. Within half a year I’d read every book I’d never read in China. I learned of Taiwanese magazines and Hong Kong newspapers. I began to uncover so many things I’d never known about. It was a special time.”

With the support of his literati circle, Ma eventually found humble dwellings on a small fishing island where he pinched fruit from the temple to feed himself.

“I wrote a great deal. I was very happy. I made great friends, all of them writers, artists and university teachers. We made political performance art together.”

As the spectre of the 1997 handover drew near, however, Ma grew worried, adding urgency to his activism. As he looks back on this time today he considers his worst nightmares prophetic given Hong Kong’s current state of unrest.

“How could we not see how things would develop? We used all our strength to tell Hongkongers what loomed ahead. I envisioned a child born of a British mother and bestowed to a Chinese cadre. That’s this generation. They’ve grown up between these two poles and now look at them. Do you think they’re happy? Do you think they’re fortunate? Hong Kong was long considered a politically apathetic place of business yet now it has become somewhere highly politicised. Nobody raises an old colonial flag unless they hate the alternative. This hatred is palpable, you can feel it.”

In the mid-90s Ma and friends published articles and conducted anti-China protests, even going so far as to encircle the LegCo building that has been the focal point of some of the recent protests, on the day of the handover. 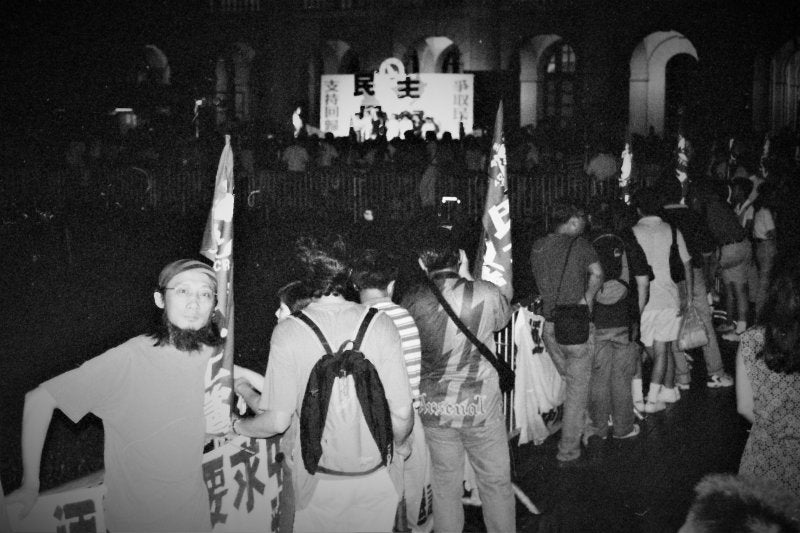 Ma at a protest against the handover of Hong Kong to China. Courtesy of Ma Jian.

In the wake of the handover Ma felt unsafe in Hong Kong and took a job as Chinese literature teacher in Germany. In 1999 he moved to the UK where he has remained since, though his novels, essays and art-activism continue to deal almost exclusively with China under Communist rule.

“Human rights, the rule of law, democracy,” he says of his short but elusive list of requirements. “That’s all we ever wanted for China and Hong Kong.”

Life began to imitate art last year when Ma was invited to speak at the Hong Kong International Literature Festival. Blogging his trip on Chinese social media garnered intense interest amongst Mainland netizens, where all his books are banned. Their comments and shares were soon censored.

“A lot of my friends had their accounts frozen, I can only apologise to them.”

Controversy hounded Ma around the Special Administrative Region. “Tai Kwun, [a cultural and heritage complex run by the Hong Kong Jockey Club] cancelled my two events. They were worried that I’d use the platform just to talk about politics. Another venue was found. Then the decision was reversed.”

If this farce wasn’t unsettling enough, Ma had to navigate a city where Mainland agents have been known to abduct their enemies, most famously the Causeway Bay bookshop workers in December 2015 as well as the billionaire Xiao Jinhua in January 2017.

“My Hong Kong friends went everywhere with me. They wouldn’t leave my side. But of course I was still worried.”

Now back in the relative safety of his book room Ma says he’s working on three stories, though the on-going protests in Hong Kong are distracting him from his work.

“This is the biggest protest in the history of humankind. One-quarter of the population of Hong Kong! That hasn’t happened anywhere else at any other time. The world must pay attention.”

And despite Boris Johnson’s sentiments that he is “very enthusiastic for the belt and road initiative”, what “President Xi is doing” and that we [the UK] are “very pro-China”, Ma still asserts that Britain must play its role.

“Britain and China have signed a treaty that specified a strong degree of autonomy would be respected and an international level of human rights maintained. But this is not the case and Hong Kong is being changed. Britain has responsibility to uphold international law and human rights, particularly in Hong Kong.”

Thomas Bird is a journalist and travel writer working in East Asia and has contributed to publications including the South China Morning Post and The LA Review of Books, as well as guidebooks such as The Rough Guide To China.