Before Air Force One even touched down in the UK for his state visit, Donald Trump had already begun tweeting insults.

He called the London mayor Sadiq Khan a “stone cold loser” who is “only half” the “height” of New York mayor Bill de Blasio, accused him of being “foolishly ‘nasty’ to the visiting President of the United States”, and claimed that “by all accounts [he] has done a terrible job”. 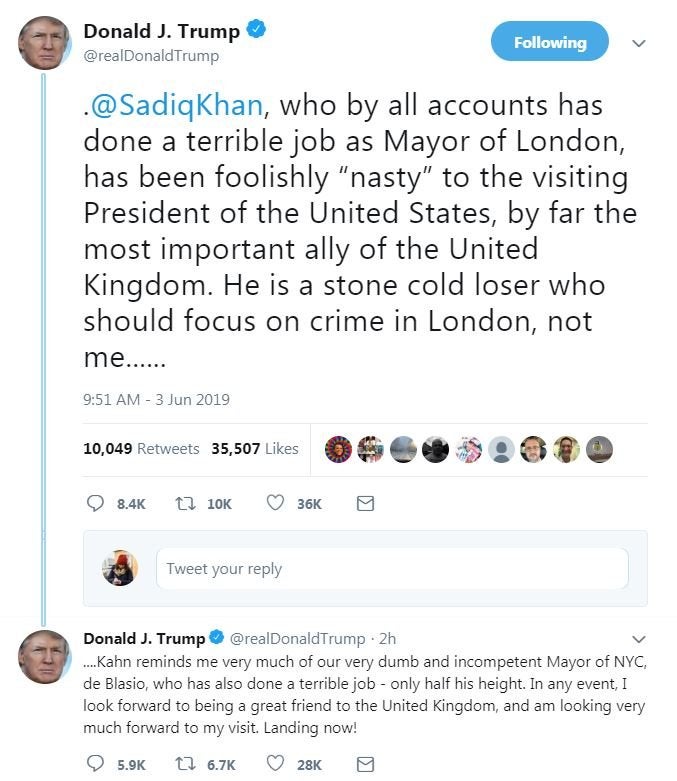 Khan’s office hit back with a statement accusing Trump of “childish insults which should be beneath” him, and called him “the most egregious example of a growing far-right threat around the globe, which is putting at risk the basic values that have defined our liberal democracies for more than 70 years”.

Trump has long had a particular taste for insulting Khan. He said last July that he had done a “very bad job” on terrorism and crime, and deliberately distorted the mayor’s reassurance about police presence following the London Bridge attacks in 2017 by tweeting: “At least 7 dead and 48 wounded in terror attack, and Mayor of London says there is ‘no reason to be alarmed!’”

I think we all know why, of all British politicians, the US president holds a specific grudge against Sadiq Khan. In the words of our writer Nesrine Malik: “The inescapable fact is that the only difference is that Khan is Muslim and brown.”