Williamson, who was attending the Beautiful Days festival, tweeted of his “privilege” in meeting Vanessa Beeley, a blogger who described meeting the Syrian regime’s war criminal president Bashar al Assad as her “proudest moment” and has waged a relentless campaign of lies and distortion to promote the Assad regime abroad.

This is not Williamson’s first dalliance with pro-Assad trutherism, having voiced doubts over allegations that Assad was responsible for the gas attack on Douma while addressing a protest outside parliament in April 2018. Williamson has been no stranger to causing offence to Jewish Labour members in recent months, so his endorsement this week of Beeley, who has also been accused of anti-Semitism, marks another new low for the Labour party.

Responding in kind to Williamson’s endorsement, Beeley said in a Facebook post “Hats off to Chris Williamson, Labour MP – a genuine human being.”

Beeley describes herself as an “independent writer”, although her relationship with the Assad regime has been publicly called into question by journalists who have come across her in the field. In reality, she is neither independent, nor a journalist; she is little more than a Western mouthpiece for the Assad regime.

The Washington Post’s Middle East correspondent, Louisa Loveluck, responded to Williamson’s endorsement of Beeley’s “reporting” with: “Beeley has justified the use of incendiary weapons against civilians, recycled and championed debunked conspiracy theories, and described a meeting with Assad as her proudest moment. This is cheerleading, not reporting.”

Beeley’s Twitter account is routinely referenced by Russian government social media accounts. She has a significant platform through Russian state media, her blogs have been cited in defence of Assad’s atrocities by the Russian government, she has held meetings with the Russian foreign ministry spokeswoman, Maria Zakhorova, and has been endorsed by far-right agitators Katie Hopkins and Nick Griffin – as well as written up by Infowars.

Beeley is a central figure in the disinformation campaign against volunteer first-responders working in rebel-held Syria – the White Helmets. The campaign’s purpose is to normalise systematic violations of the Geneva conventions by the Assad regime and the Russian government.

Beeley has even gone as far as to say that the humanitarian organisation are “terrorists” and are “legitimate targets” for regime or Russia airstrikes.

During her time on this earth, Jo Cox MP campaigned passionately for the White Helmets. The fund set up in her name has donated much of what it has raised to those ambulance drivers and rubble diggers. Beeley’s website launched a vicious posthumous attack on Cox’s legacy. She has shamelessly accused her of being a “warmongering Blairite” and “al-Qaeda advocate” endorsing a policy of “wholesale devastation” on Syria. 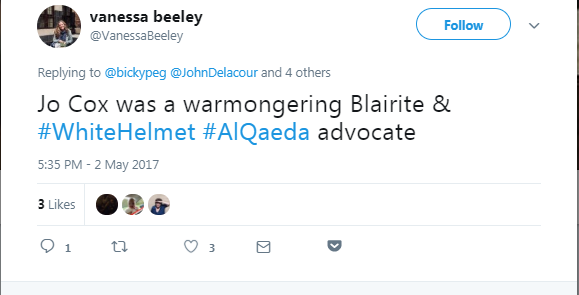 Vanessa Beeley is a professional fraud who lies to defend the Assad regime. She has effectively said so herself in leaked social media messages admitting to being fully aware of the Assad regime’s torture campaign. The Assad regime’s campaign of torture and systematic extermination is well documented, and represents the regime’s biggest potential threat in the international courts.

Beeley’s long-time associate Eva Bartlett has also received significant promotion by the Kremlin. Bartlett shares the same recycled propaganda lines as Beeley, claiming that child victims of Assad’s war crimes are crisis actors. Channel 4 News thoroughly debunked her baseless and offensive claims. The Assad regime’s representative at the UN Bashar al-Jaafari provided further proof of Bartlett and Beeley’s proximity to the regime in an interview declaring his “love” for them.

Both Robinson and Ford appeared on the festival line-up alongside Beeley and Williamson. They were opposed by Peter Tatchell. Speaking after the event Tatchell said:

Beeley’s conspiracism doesn’t stop with Syria; she has written crank conspiracies on the Charlie Hebdo massacre, which she described as “oxygen for this dying piece of shit Zio media”. A Swedish university also triggered a backlash and was forced to apologise after hosting a lecture by her that was widely condemned by visiting students.

Beeley also has a history of anti-Semitic statements, including saying “Zionists rule France” and that French-American journalist Shawn Carrie was likely an “Ashkenazi Jew” and labelled him a “Zionist agent” after he published an article questioning the dubious funding behind the pro-Assad activism of Bartlett and Beeley and their associates. Speaking to the New Statesman, Carrie accused Beeley of anti-Semitic abuse, claiming her purpose was to “slander journalists and stir up hatred”.

Responding to Williamson’s endorsement of Beeley, Eve Sacker, a Jewish constituent of Williamson, tweeted: “There is a tiny community of just over 100 Jews in Derby. I don’t trust him to represent us.”

However, despite the mountain of complaints against Williamson by Labour members and even loyal Corbyn supporters, he has been continually endorsed by noteable pro-Corbyn activists such as Novara Media’s Aaron Bastani and Ash Sarkar, providing him with a youthful platform to reach new audiences that he may have otherwise not had.

While the who’s who of crankery on display at the Beautiful Days festival is worthy of independent condemnation, the endorsement of Beeley by Williamson represents an attack on public decency and human rights from a sitting Labour MP.

The dangers of this endorsement cannot be taken lightly. Not just from how the disinformation machine now has new content but also, as Amnesty International UK’s campaigns manager Kristyan Benedict says, it suggests that the Labour party had a “human rights problem” and that such an endorsement “isn’t a one-off” among Corbyn supporters.

With seemingly no censure from the Labour party for Williamson’s increasingly offensive behaviour, his endorsement of Vanessa Beeley will be greeted as a dog-whistle by conspiracy theorists. By refusing to distance themselves from Williamson, the Labour leadership and pro-Corbyn media voices are indicating that war crimes denial, anti-Semitism and extremism is tolerated within the Labour party.

There is a war for the heart of the Labour party underway, ultimately Labour cannot be both the party of Jo Cox and the party of Chris Williamson. If Williamson’s latest endorsement receives no censure from the Labour leader’s office, the answer to that question will be heard loudly and clearly all the way from Westminster to Damascus.

Oz Katerji is a writer, filmmaker and journalist with a focus on the Middle East, and former Lesvos coordinator for British charity Help Refugees.​