In the last few weeks, as the world has been reminded of the ongoing war in Syria, much has been made of supporters of Bashar al-Assad on the political fringes: the academics spreading conspiracy theories, war crimes denial and misinformation on social media, and a video of a rather bewildered looking Stop the War protestor claiming that Assad is a good man because he’s a doctor. But much less attention has been paid to a seemingly unlikely source of sympathy for the Syrian dictator: British Christians.

A British delegation was recently in Damascus to meet senior members of the Assad regime, according to a report in The Telegraph. Led by Andrew Ashdown, an Anglican clergyman, the delegation also included the priest and journalist Giles Fraser and the former bishop of Exeter, Michael Langrish. It wasn’t the first of such visits by British Christians to Assad’s Syria – Rev Ashdown has been to Syria several times. Such visits by Christians are as systematic as sympathy for Assad on the far left and far right. But why?

The Assad regime poses as a modernising, secularising, civilising influence, the only possible means of keeping the Syrian masses at bay. And the manipulation of sectarianism is crucial to its survival.

The Christian population of Syria is between 5 and 10 per cent, according to different estimates, and one of the many religious minorities that the regime has deliberately wooed. During the 1982 Muslim Brotherhood insurgency, for example, the regime sent many Christian officers to Hama, where tens of thousands of people were killed. As Nicolas Hénin, a former Isis hostage and an astute observer of the regime’s sectarian politics, puts it in his book Jihad Academy: “This was a Machiavellian way of sealing a blood pact with the Christian community. The message was clear: if one day the Sunni are in a position to take their revenge, they will avenge themselves on you as much as us. Your fate now depends on our regime’s survival.”

As a group of Syrian Christians in the US pointed out last year, the 2011 protests were initially non-sectarian. Christians and Muslims could be found protesting alongside one another, along with various other religious and ethnic groups that make up the Syrian population. Christians were not spared regime brutality. Bombs do not distinguish between people on the grounds of faith, as the death of the Christian activist Bassel Shehadeh shows. But as Yasmine, a Syrian Christian who agreed to speak to me on condition of anonymity told me, many young Christians who protested against Assad came to feel excluded by the opposition. The militarisation of the uprising, and with it the emergence of armed jihadist groups, destroyed any hope of a cross-sectarian alliance. There are now good reasons for Syrian Christians to be scared.

Reaching out to Christians in the West is an important part of the regime’s propaganda strategy, which is why visits such as the recent trip to Damascus are far from inconsequential. It isn’t even necessary that visitors return as enthusiastic Assadists – it’s enough that they swallow the line that Assad is the saviour of Syria’s Christians, even if he’s also responsible for more than 90 per cent of civilian casualties in the war. Or, as Michael Nizar-Ali, the former bishop of Rochester, said after a meeting with the Syrian dictator in 2016, “With all my experience, I cannot say that he is the worst of all.”

This is the context in which Giles Fraser’s tweeting of photos from Damascus should be understood. After meeting with Mohammed Abdul Sattar, the minister for religious affairs, currently under sanctions in Britain, Europe and America, Fraser praised Syria’s “long tradition of religious pluralism” and “the separation of religion and politics”. 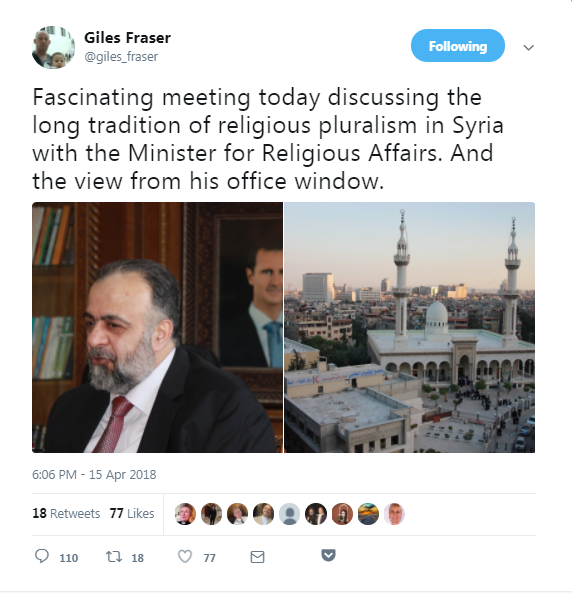 Perhaps most shockingly, Fraser and the other visitors met with Ahmad Badreddin Hassoun, the Grand Mufti, with whom they talked about “how love is stronger than missiles”. There is interfaith dialogue, and then there is talking to the Grand Mufti of Syria. Despite apparently believing love to be stronger than bombs, he has threatened to train suicide bombers to send to the West, and according to Amnesty has been responsible for the execution of thousands in Saydnaya prison.

In Fraser’s own defence of his trip he calls Syria a “police state” and is right to call regime politicians “Assad placemen”. He understands that many Syrians support Assad out of desperate fear that the only alternative is Isis. But he remains completely unaware of the propaganda value of this narrative, or the long history of the regime’s sectarian strategies, and of the fact that, whether he likes it or not, he is being made complicit. As for the Grand Mufti, Fraser concedes he might be a mass murderer, but he’s also a  “theological moderate”, which is presumably meant to sound like a good trade off. Fraser doesn’t make it clear why murder justified by moderate theology is superior to murder justified by extremism.

There are Christians whose response to the Syrian tragedy has been heroic. Foremost among these is Father Paolo Dall’Oglio, an Italian Jesuit priest. Father Paolo spent many years in Syria, working on interfaith relations and helping to restore a sixth-century monastery 50 miles from Damascus. When the protests began in 2011, he called for an end to the regime’s violence and a transition to democracy, and was exiled from the country. In 2013, his efforts to build peace took him to Raqqa, which had once had a significant Christian community; he was kidnapped by members of Isis and there has been no reliable information about him since.

Clearly, most of Assad’s Christian fellow travellers in Britain are motivated first and foremost by a desire to protect Syria’s Christians, who have legitimate fears for their future and for their safety. But Assad, a brutal dictator sustained by the very sectarian divisions his Western sympathisers see him as the solution to, is not the answer. According to the Syrian Network for Human Rights, for example, the regime was responsible for 63 per cent of the destruction of churches between 2011 and 2015. Propped up by sectarian militias, including Hezbollah and recruits from Iran, the idea of Assad as a secularist is laughable. In fact, by encouraging the myth of Assad as the only viable protector of Christianity in Syria, it’s not difficult to imagine how these trips to Damascus might do more harm than good to the people they seek to help.

“I really question how much propaganda value the Assad regime can really squeeze out of a visit from the vicar of a small parish in south London,” Giles Fraser writes. Yasmine, the Syrian Christian, thinks otherwise.“It’s condescending to travel down to look at this ridiculous propaganda show, and to come back thinking they know how to protect us,” she told me. “We don’t need protection from them. We need support so that we’re fully part of the discussion. We’re not children – give us some autonomy.”

George Morris is a PhD student at the University of Cambridge and a policy and advocacy adviser to Rethink Rebuild Society.​