On Wednesday night, a gay black woman from a Brazilian favela – a shanty town on the outskirts of the nation’s font-family:"Arial","sans-serif";color:#333333″>Marielle Franco was a popular city councillor, having been elected in 2016 with the fifth-highest vote count among council members. A fierce feminist and human rights campaigner, she was known for speaking truth to power, especially when it came to crimes that police brutality committed against favela residents.

font-family:"Arial","sans-serif";color:#333333″>On Thursday, hundreds of thousands flocked to central Rio to pay their respects, cry, and embrace family and friends as Franco’s coffin was carried to Rio’s Council Chamber. But many, especially women, were too scared to go. “Do you think I should?” A friend of mine asked me via WhatsApp. Young people of colour living in Rio know they have a target on their back. They know they might be next. 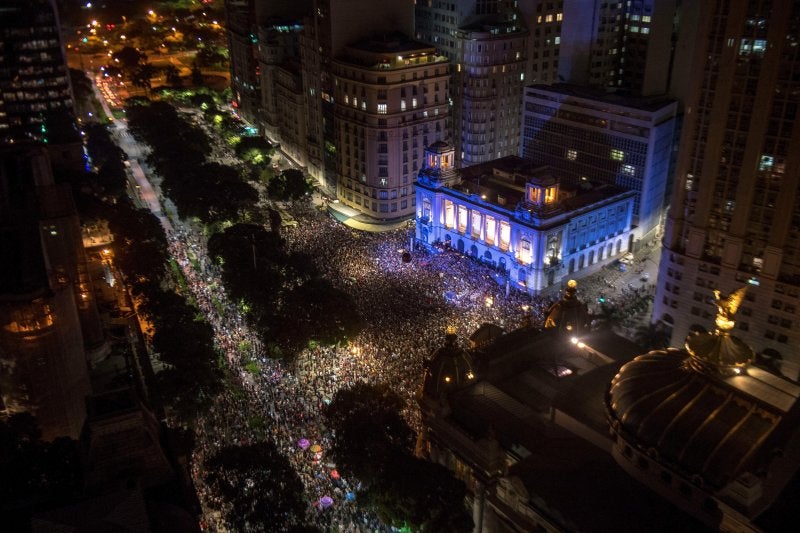 Protesters on the streets of Rio. Photo: Getty

Franco’s murder, of course, didn’t happen in a vacuum. It happened in one of the most unequal societies in the world; the last country in the Western Hemisphere to abolish slavery, where corruption is endemic and poverty is systematically criminalised.

For decades, Rio’s 763 favelas have been ground zero for the war on drugs. According to a 2014–2015 Amnesty International report You Killed My Son: Homicides by Military Police in Rio de Janeiro, of 1,275 registered cases of killings committed by on-duty police between 2010 and 2013, 99.5 per cent of the victims were men, 79 per cent were black, and 75 per cent were between the ages of 15 and 29.

The report detailed a “culture of racism” within Brazilian society, which, coupled with a narrative that discriminates against and criminalises the poor, contributes to the legitimisation of these deaths.

Last month, right-wing President Michel Temer signed a decree putting the military in charge of public order in Rio. The decision was hugely unpopular; with favela residents warning that armed soldiers on the streets would only beget more violence. Basic services – including schools, hospitals and sanitation – are still a pipe dream for many in those communities.

Ahead of the presidential elections in October, the political climate is as extreme as the violence on the streets, with the country swept by a wave of right-wing populism and a longing for the days of Brazil’s brutal dictatorship. Former president Luís Inácio Lula da Silva, of the far-left Worker’s Party, is currently in the lead, but is facing corruption charges and may not even be able to run. Polling second is the far-right candidate, Jair Bolsonaro, who, in 2014, told cogresswoman Maria do Rosário he would never rape her because “she was not worth it.” Today, a woman is raped in Brazil every 11 minutes. Twelve are killed daily.

As vigils for Franco were held last night all across Brazil, white conservatives also took to the streets and social media to vent their anger at human-rights activists.

“That’s what you get when you protect criminals,” one man was reported saying at a vigil in São Paulo.

“Even at the time of death, Marielle remains one of us, the vulnerable,” said Jurema Werneck, executive director of Amnesty International. “It is another unacceptable example that the state does not protect the lives of blacks and those who fight for human rights. We need an urgent response from the state.”

But those who face police brutality and put up with a corrupt state on a daily basis are not hopeful. Not today. Today there is fear. Franco had a national platform, she was educated, and she had escaped life in a favela. In many ways, she had made it. Yet, her life was brutally ended, simply for doing what she was elected to do.

Last month, as the Rio Carnival got underway, black Brazilians took centre stage, talking about social and political issues while parading the famous Marques de Sapucaí Avenue on their floats. They sang about modern day slavery, state corruption, the plight of the poor. In front of an international audience of millions, it was the safest way they could have chosen to make themselves heard. But in a country which, in 2015, had more homicides than war-torn Syria, Carnival provides a welcome ceasefire. It is not the norm.

Before her murder on Wednesday, Franco was doing her work away from the bright lights, as she had been before getting elected. Redes da Maré, a non-profit group based in the favela where she grew up described the killing in simple terms as “an irreparable loss”. It’s the kind of loss Brazillians have become all too used to.