Aged just one-year-old, Yasser al-Abed was travelling towards safety with his family of 14. But the journey turned into a death trap. In total, 16 people, including six from the Abed family, froze to death in the mountains. They were just a couple of hours’ drive away from the glitz and comfort of Beirut.

The frozen bodies of the Abed family and their fellow refugees are a stark reminder that the conflict in Syria is not over. Not for those like the Abeds, whose neighbourhoods were destroyed during the assault on Islamic State, nor for the misery of those still living in the middle of a warzone.

Half a dozen children are screaming in the packed, tiny room in the north Lebanese city of Tripoli, where I meet the surviving members of the Abed family. The adults sit on the carpet with fallen faces. The mood is bitter.

Amal, an 18-year old mother, is hiding in a corner of the room, her face buried in her knees despite her three-year-old daughter nudging her for attention. Amal is Yasser’s mother. Her son was the youngest of the six to die.

Eventually, she pulls out her phone and runs her fingers through the picture of her boy. “This is all I am left with. I miss him very much,” she says. Her eyes well with tears.

The Abed family came from the Syrian province of Deir Ezzor. The province had changed hands during the long conflict, falling to Islamic State in 2015 before being taken again by the Assad regime. Caught between airstrikes and extremists in the ground, up to 95,000 civilians were displaced by the fighting, according to an October UN estimate.

In the Abed family’s case, their home was shelled in December 2017, leaving the family no choice but to seek safety somewhere else. For a month, they say, they stayed in a hotel in Damascus known as a collection point for Syrians hoping to leave the war-torn country. One day, they were approached by a smuggler who offered to escort them to Lebanon illegally.

Home to at least a million Syrian refugees, Lebanon started restricting access for more such cases in 2015. That has not deterred Syrians from trying to seek a safe haven, often endangering their lives a second time. Since December last year, 300,000 have fled Syria in renewed fighting on several fronts. The Abed family is one of them.

Desperate, they took the smuggler at his word. They decided to march in the middle of the night, braving the snow, the cold, and the violent winds.

After clearing immigration on the Syrian border, the smuggler sat them in a café and advised them to follow blinking lights emanating from a point on the mountain in the border area. He collected a sum of $1,500 for the group, told them it would be a short walk and left.

On the night of the journey, Yasser was in the arms of his aunt, Amal’s sister Abir. Seven months pregnant, Abir found it difficult to carry the infant. “The smugglers said it would be a 30 minute walk, but we walked all night,” she says.

The family followed the blinking lights as instructed and met three men. They discovered they weren’t the only ones to be transported but that a large gathering of 60-70 people would make the same journey. The three guides, possibly local shepherds, divided them into groups and they began their quest.

At some point in the night, the man leading Abir’s group disappeared. She was with her mother and some other family members, but deep in a winter storm, she became separated from the rest. Tired and lost in the dark, after hours of hard climbing, Abir succumbed to sleep. “When I woke up, everyone around me was dead,” she says.

Abir found her nephew Yasser lying still on the ice. His eyes were open, his face pale and his body tilted to the right. His sweater was labelled “Ferrari”. He had not survived the night.

His photograph, the snow encasing his lifeless face, reminded many of that of Alan Kurdi, the three-year-old who drowned in the Mediterranean and whose picture after he washed up on a beach near Turkey shocked the world in September 2015. 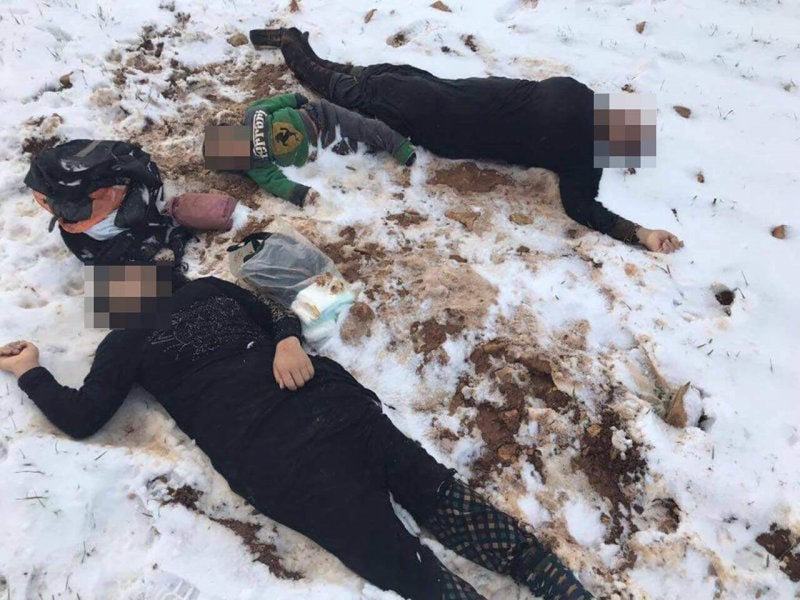 The image of Yasser and other Syrians, his face blurred. Source: Lebanese Civil Defense

Both Yasser and Alan were small children whose families were fleeing the war in Syria. Yet the response has been drastically different. Alan’s picture changed the nature of the debate about refugees in much of the Western world; Yasser’s has hardly received any attention.

When Alan died, it was the height of the refugee crisis, and hundreds of thousands of Syrians were knocking on the European door. By the time Yasser met his end this January, Islamic State was on the run, Assad was thought to be winning and the news cycle had moved on.

The reality is that the Syrian war isn’t ending, but flaring up anew, and Syrians are continuing to die.

Since December, several hospitals and clinics have been targeted by the Syrian regime in Idlib in northern Syria. Scores have been killed. They include civilians who were bussed out of Aleppo in December 2016 after rebels who had held the east of Syria’s second city surrendered. They died in Idlib instead.

In the rebel-held Damascus suburb of eastern Ghouta, 400 have been killed since late December, according to the Syrian Observatory of Human Rights and a 100 of these are children. Thousands continue to live under a regime-imposed siege.

Both Idlib and Ghouta are in theory opposition-controlled “de-escalation zones” under terms of a ceasefire agreement negotiated between Turkey, which supports the rebels, and regime-backers Russia and Iran. The Assad regime is supposed to have given its assent, but has shown the rules little regard.

In August last year, at the Four Seasons Hotel in Damascus, Bashar al-Assad’s media boss and close adviser, Bouthaina Shaaban, told me that there is no doubt the Syrian government will attempt to regain all of Syria. “We have got Aleppo and now we are in Deir Ezzor, next we will go to Idlib and get back every part of Syria under the control of terrorists,” she said.

The Syrian regime has gone about eliminating all shades of opposition and regaining the country in a systematic manner. First, it cracked down on the original, democratically-minded protesters. With the moderates crushed, it could create a narrative of “Assad versus the extremists”. Then, it used the fight between regional and world powers against IS to its advantage. Having won time with the four de-escalation zones, it focused on reasserting dominance in major financial and resource-rich regions. Now strengthened, it is targeting the opposition in these zones, including the civilians stuck among the rubble.

Meanwhile, Turkey’s hostility towards the Kurds and America’s support for them has put two Nato allies on opposite sides. And in the south west of Syria, two regional rivals, Iran and Israel, are engaged in a stand off after an Iranian drone was intercepted flying over Israeli territory. The contested border region of the Golan Heights, up until now dorman, could potentially become a newly active battlezone.

In short, the theatre of war in Syria has expanded, not contracted. And both living in the country and leaving it will continue to be a death trap for ordinary families like the Abeds.

The family members had suffered from the social injustices imposed by the regime for all thier lives. When Islamic State took over, their problems magnified. Amal and Abir couldn’t leave the house, and Shihab, Yasser’s grandfather, lost his job as a TV repair mechanic because IS banned watching it. But after losing their home and belongings in the war and half of their family in the subsequent attempt to flee, they wonder if they were better off living under IS.

Losing Yasser makes Amal want to return to Syria. She came to Lebanon looking for a new home and safety but the sorrow of her son’s death has swallowed her. She craves the surroundings she knows.

Shihab blames himself for asking the family to escape. He wonders had they not, may be his grandson would still be alive.

As he received condolences from relatives, he said: “Life under IS was difficult but there was no war. Our house was only bombed when the regime started clearing them up.”