In the latest example of Freudian nuclear gesturing, the US President Donald Trump tweeted that he “too” has a nuclear button, “but it is a much bigger and more powerful one” than the North Korean leader Kim Jong-un’s – “and my button works!”

It sounds a little like Trump is protesting too much – and about something rather closer to home than the US military’s nuclear capacity.

Although the world feels a little less safe this morning, this tragically insecure macho language isn’t unusual or new in the world of nuclear weapons. You only need to look at the UK’s Trident missiles to see there’s more than a hint of phallic suggestion to the art of global devastation. 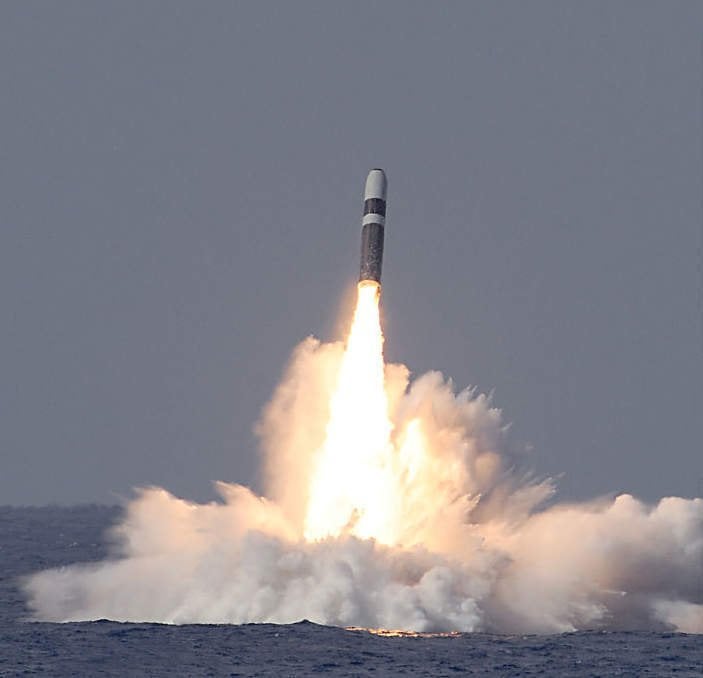 In her 1987 essay “Sex and Death in the Rational World of Defense Intellectuals”, the US academic Carol Cohn argues that the language of defence strategy – particularly nuclear defence – is overtly sexual. “The history of the atomic bomb project itself is rife with overt images of competitive male sexuality,” she writes.

After attending a Cold War era summer course on nuclear weapons, nuclear strategic doctrine, and arms control – run by “white men in ties discussing missile size” – she discovered the way they spoke about nuclear war was rife with imagery of male sexuality.

Cohn noted phrases like “penetration aids”, getting “more bang for the buck”, “to disarm is to get rid of all your stuff”, “the nicest hole – you’re not going to take the nicest missile you have and put it in a crummy hole”, “the Russians are a little harder than we are”, and India’s first explosion of a nuclear bomb as “losing her virginity”.

She also heard references to vertical erector launchers, thrust-to-weight ratios, soft lay downs, deep penetration, and protracted attacks versus spasm attacks (referred to by one military adviser as “releasing 70 to 80 per cent of our megatonnage in one orgasmic whump”). And when she visited a Trident submarine, she was invited to “pat the missile” – leading to this simply brilliant reflection:

“What is all this ‘patting’? What are men doing when they ‘pat’ these high-tech phalluses? Patting is an assertion of intimacy, sexual possession, affectionate domination. The thrill and pleasure of ‘patting the missile’ is the proximity of all that phallic power, the possibility of vicariously appropriating it as one’s own.”

Shortly after this essay was published, Robert L O’Connell’s 1989 book Of Arms and Men: A History of War, Weapons, and Aggression tracked the “phallic nature” of contemporary weaponry. “Comparisons of numbers and, in particular, size have assumed an importance that is beyond purely rational explanation,” he writes of the arms race between the US and the Soviets – noting graphics in the Pentagon showing the relative sizes of their weapons compared with Soviet missiles.

“It is perhaps accidental but still notable that these consummate symbols of potency should so resemble a phallus,” he adds. “Although exaggerated in modern missiles, the phallic nature of numerous weapons seems more than just a coincidental function of aerodynamic and operational necessity, and therefore may be representative of some of the themes which cluster around intraspecific aggression.”

O’Connell finds that this imagery spans back to the “phallic naval rifles” on World War One dreadnoughts, and Cohn too describes the metaphor’s long history. “Sexual imagery has, of course, been a part of the world of warfare since long before nuclear weapons were even a gleam in a physicist’s eye,” she writes, pointing out a magazine advertisement for a British Harrier jet entitled “Speak Softly and Carry a Big Stick”, boasting “an exceptional thrust to weight ratio”.

So if the history of war is little more than the history of willy-waving, it might have made more sense for the future of humanity to elect a woman. We could have at least let her pat the missile.