Porque Yo Decido. Because I decide. That was the title of a manifesto handed to the Spanish government on 1 February on behalf of the millions of men and women across the country who oppose the conservative People’s Party’s push to ban abortion. “Because it’s my choice,” reads the manifesto. “I am free, and I live in a democracy, I demand from the government, any government, that it make laws that promote moral autonomy, preserve freedom of conscience, and guarantee plurality and diversity.”

In late December, the People’s Party (PP) government, led by Prime Minister Mariano Rajoy, approved a bill that will make abortion illegal in all but the most extreme medical circumstances and in cases of rape. “That was when the explosion of resistance happened,” says feminist activist Cristina Lestegas Perez. “Since then, there have been hundreds of street protests, debates, demonstrations, parades, conferences, seminars, exhibitions and performances all over the Spanish states and overseas.”

Under the Franco regime, abortion was illegal in Spain. In 1985, laws were passed permitting termination of pregnancy in very limited cases, but so many Spanish women were travelling to Britain to have abortions that dedicated flights had to be chartered. In 2010, the law was finally liberalised by the then socialist government to permit abortion up to the 14th week of pregnancy.

If the parliament passes the bill, as it almost certainly will, Spain will once again have one of the most restrictive abortion laws in Europe. Women will be forced to carry pregnancies to term even in cases of severe fetal abnormality. Teenage girls will require the consent of a parent to have an abortion under any circumstances. “This law will take Spanish women back to dictatorship times when we needed the consent of our fathers or husbands to do anything,” says lawyer Maria Alvarez, who has been active in the pro-choice protests from the start. “In my opinion, hearing a priest speaking about my uterus is disgusting and obscene. I haven’t seen any priests or bishops in any of the demos against domestic violence. They don’t give a damn about women. They want to control us. They won’t win this battle!”

China’s repression of Uyghurs extends far beyond its own borders

Why is Finland joining Nato? 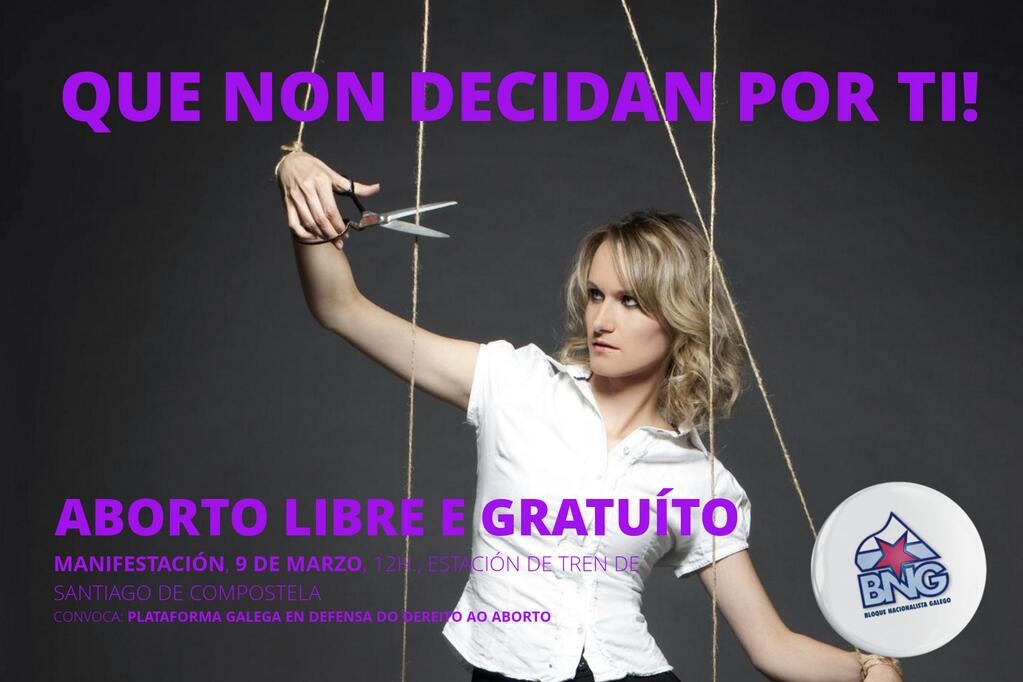 The clause that allows for abortion in cases of rape gives the lie to the Spanish government’s claims to be “pro-life”. If one’s true and primary concern is the sanctity of human life, then how that life came about should not be an overwhelming consideration. However, if one’s real motive is restricting women’s sexual freedom, then it makes sense that women and girls who got pregnant without consenting to sex should be spared the punishment of forced childbirth. That, of course, is what’s really on the table when the global “pro-life” movement speaks, as the Spanish Justice Minister did, of “protecting” women by treating them like idiot criminals, incapable of making decisions about their own bodies and their own futures.

The Spanish government’s concern for the rights of unborn children appears to terminate swiftly once those children have been born. Six months ago, the Council of Europe, the continent’s main human rights watchdog, has warned Spain that its austerity programme could have a devastating impact on its children, 30 per cent of whom now live in poverty. And here we get to the crux of the issue, the real reason that the abortion rights question is back on the table in Spain. It’s not about morality. It’s about austerity.

In the years since the global economic crisis of 2008, politicians worldwide have used attacks on abortion, contraception and LGBT rights to distract attention from fiscal disaster. As the European parliamentary elections approach, the Rajoy administration has a great deal from which to distract voters’ attention. Unemployment stands at 26 per cent. The government has been mired in corruption scandals for many months. It has no coherent political narrative to offer those who voted for the PP out of despair except more austerity. To say that women’s right to decide what happens to their own bodies has been used as a political football is accurate only if one thinks back to those playground days when the boys who had the football routinely trampled over the entire yard, ruining everyone else’s games.

The PP, like many other conservative and neoliberal parties across the west, has no compelling story to offer its core voting base in a time of cuts, and is losing support to new parties that are further to the right, like the Vox party, which has been compared to the Tea Party in the United States and to UKIP in Britain. The new abortion law isn’t the only high-profile policing of women’s sexuality that the PP has been pushing. In July 2013, just corruption scandals involving senior ministers were reported, the government voted to forbid single women and lesbians from accessing fertility treatment except through prohibitively expensive private clinics. Attacking women’s rights isn’t just a diversion tactic. It’s a bid for votes from cultural conservatives.

The enormous pro-choice backlash in Spain is as much about democracy as it is about women’s freedom. In forcing through the new conservative abortion law against the wishes of 80 per cent of the population, the Spanish government has demonstrated its willingness to override public opinion in order to secure its own base. The 15M and Occupy movements of 2011-12 are long over but the core of popular left-wing sentiment in Spain is still deeply suspicious of representative democracy. Activists across the country share the sense that Spain is being dragged back to dictatorship times – a phrase that I hear repeated until it becomes a refrain – and not just over moral questions of women’s sexuality.

“It’s a big scandal,” said Ana Miranda Paz, a former MEP for Galicia and member of the Gender Equality Committee for the European Parliament. “The PP is using the next European campaign to get the votes of the most conservative part of Spanish society. The Rajoy goverment wants to bring us back to dictatorship, reducing equality, cutting the budget to improve education and sexual rights, cutting social rights and the public health system.”

The protests against the new law have spread far beyond the feminist community, and men, too, have been on the streets from the start. “The public response has been massive,” said Perez. “There is common opposition to the law from all the sectors: doctors, lawyers, judges, educators, housewives, politicians, labourers. It is really thrilling and motivating to witness such a shared resistance to a so-called gender issue.”

Right now, as I’m writing this piece, it’s International Women’s Day, and tens thousands of men and women in Spain and across the continent are marching against the Rajoy government’s determination to restrict women’s reproductive rights in the face of popular resistance.

“Me myself, I will be doing what is needed,” said Perez. “I will go to the protest and demonstrate that millions of men and women are against this retrogressive law. And on the next day, I will keep fighting for our rights with my dear fellow women and we will keep doing it day after day until we overthrow this law.”