Most people believe that Europe needs to integrate for the eurozone to survive. As such, the makeup of the Commission and European Parliament may be about to become rather more important than it has been previously. This is thanks in large part to the Lisbon Treaty, which has bolstered the powers of the Parliament, extending its influence over the Commission, and prompting the main European party groups to insist on selecting their own candidates for the role of Commission President (currently held by José Manuel Barroso).

The overwhelmingly pro-European profile of the European Parliament could also be about to change, with a number of new eurosceptic nationalists likely to be elected at this May’s European elections. With no obvious explicit basis for banking union or financial solidarity in the existing treaties, fears are growing among the European cognoscenti that the integration process, such as it is, could be at risk of derailment by Europe’s increasingly restive electorate.

The political duopoly of the centre-left and centre-right has been eroding since the onset of the global recession in 2008 (chart 2). Since then the combined support of the big, pro-EU, pro-market parties, which have held power in most of western Europe since the 1970s, has dropped from 67 per cent to 57 per cent. The average support of “hard” eurosceptic parties, meanwhile, has jumped from 5 per cent to 14 per cent in the same period (chart 1). Both of these measures are weighted, so the rise of the Five Star Movement in Italy, or UKIP in the UK, has a far greater impact than the dwindling of Vlaams Belang in Belgium (where eurosceptics have faded).

Precise projections for seat numbers at the European elections are tricky thanks to the varied electoral systems employed by each country, but the broadly proportional nature of the overall system resulted in the 8.1 per cent that hard eurosceptic parties polled in 2009 translating to 65 or so seats (8.6 per cent of the total). Based on current trends, we can expect such parties to poll between 16 per cent and 22 per cent, which would translate to between 120 and 165 seats.

These numbers should not be construed as constituting one monolithic, eurosceptic bloc. They include parties of both the hard left and hard right who would be highly unlikely to work together. They also include neo-fascist parties like Greece’s Golden Dawn and Hungary’s Jobbik, who are shunned even by right-wing parties like France’s Front Nationale. Indeed, Front Nationale is currently taking steps to expand the eurosceptic, anti-immigration party of which it is a member, European Alliance for Freedom, but has ruled out including neo-fascist parties and has also failed to bring on board Europe’s other big eurosceptic party, UKIP. European parliamentary history is littered with attempts to construct nationalist, anti-immigration parties which eventually broke up in disagreement and recrimination. Such parties do not play well with others and their influence is less potent as a result.

So the data indicate that the centre-right and centre-left will retain their legislative grip on the European Parliament. They vote together on most of the important bills (e.g. the general budget for the European Union). It’s worth noting that there is no mechanism for small groups of recalcitrant MEPs to filibuster legislation that has majority support (as in the US). Speaking time is allotted to parties in proportion to their size and those parliamentarians who go over their allotted time are liable to being physically removed from the chamber.

There will almost certainly be a significant boost to the number of eurosceptic MEPs, but it will likely be of little more than symbolic effect. In fact, we expect it to be more or less business as usual in the European Parliament after the election dust has settled. That’s good for stability, though whether it’s a good thing for Europe long term is another matter. If the toxic mix of political inaction and high unemployment continues in, then the trends in the charts below will likely continue to deteriorate, pushing an ultimate resolution to the crisis even further beyond reach.

Chart 1: Support for eurosceptic parties on the rise, but still relatively modest 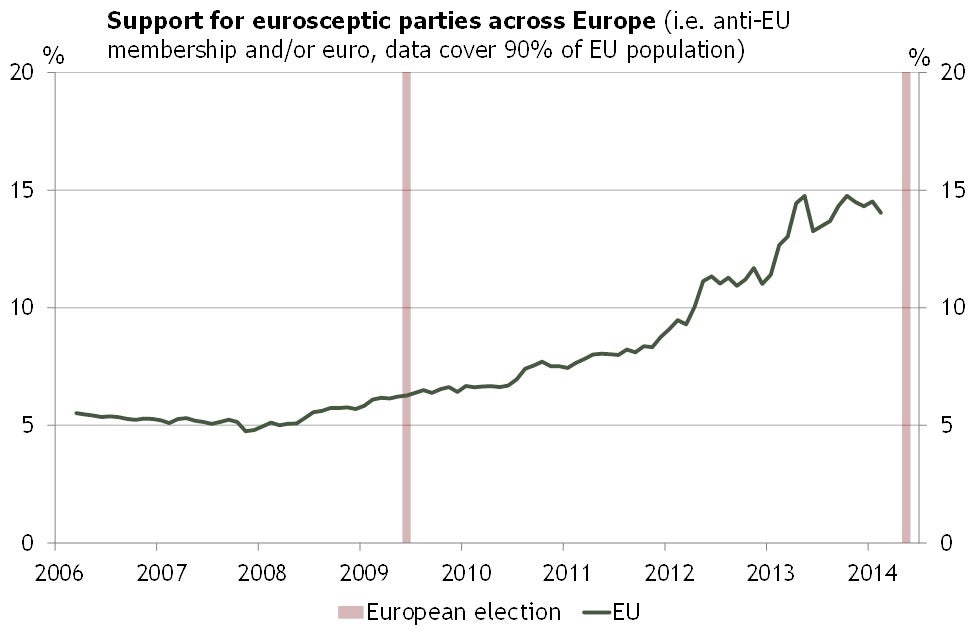 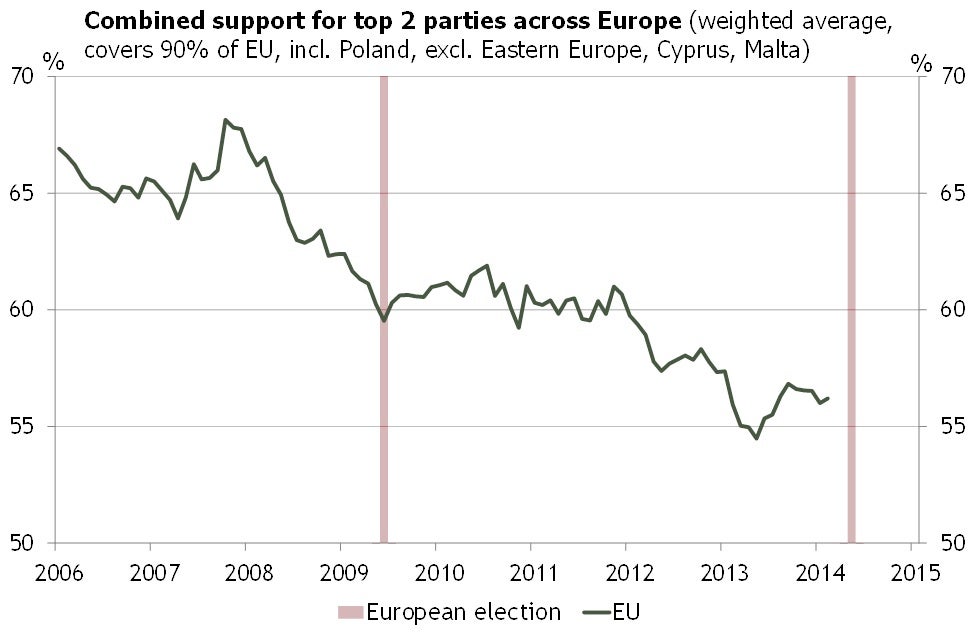