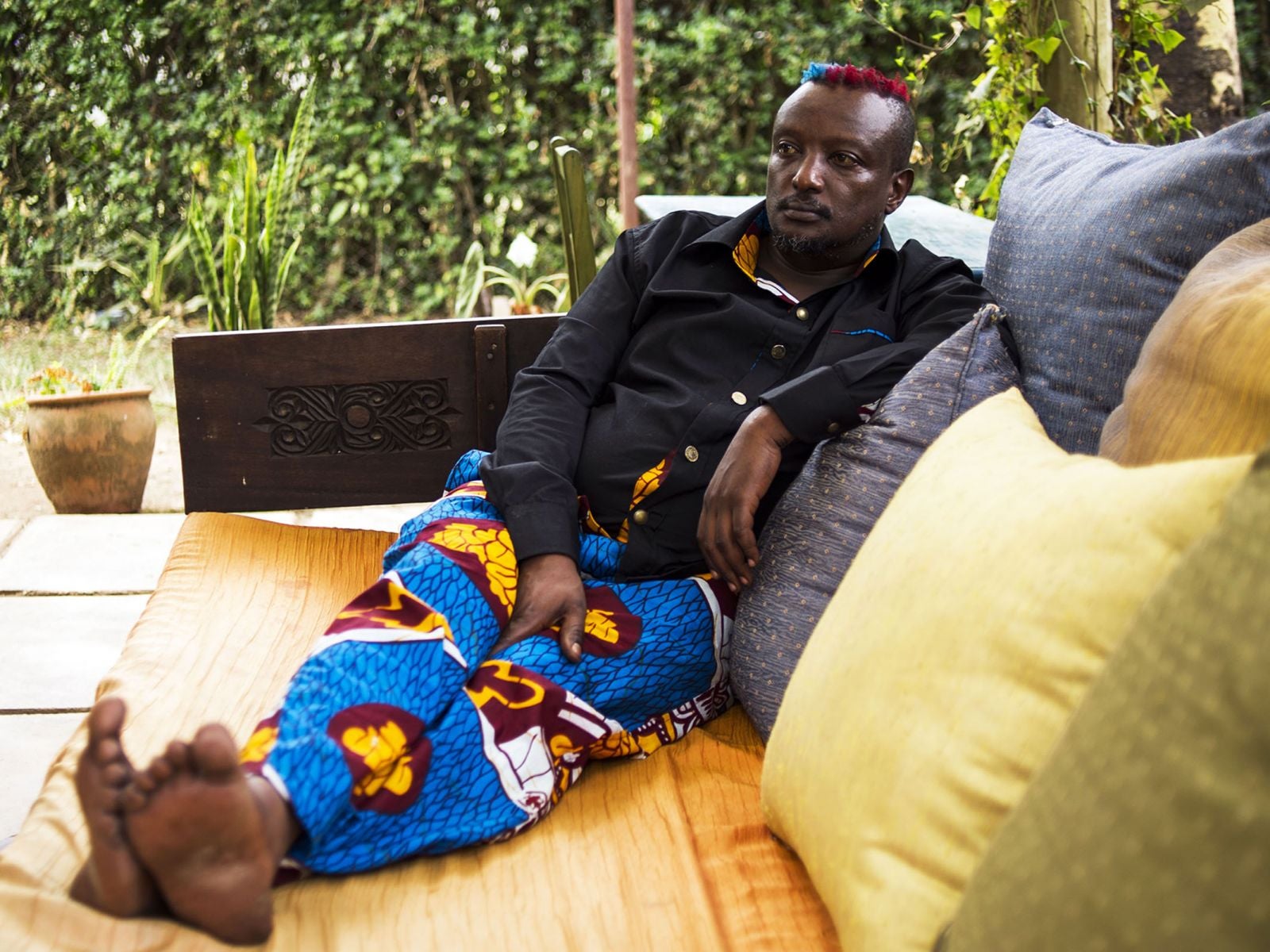 Binyavanga Wainaina: “I didn’t want to come out in the New Yorker; it just felt wrong. It needed an African conversation”. (Photo: Phil Moore/Guardian)

The Kenyan writer Binyavanga Wainaina walks into the lecture room at the London School of Economics wearing a fluorescent yellow suit and a turquoise V-neck, eating a toastie from Pret A Manger. He washes it down with a coffee, standing by the lectern as the room fills up with students, journalists and admirers clutching his memoir, One Day I Will Write About This Place, which is on sale by the door.

Without speaking, he has already broken the silence. “He’s so eccentric,” says Vincent, a programme-maker sitting on my right, who wants to interview Wainaina for Kenyan television. “He just doesn’t give a shit.”

On 18 January, his 43rd birthday, Wainaina published a “lost chapter” from his memoir – a short confessional essay entitled “I am a homosexual, Mum”. The piece reimagined the scene at his mother’s deathbed in Nairobi, where the writer whispered a truth about himself known “since I was five” into her ear.

Earlier, on 13 January, President Goodluck Jonathan of Nigeria had quietly approved a law banning same-sex relationships, criminalising gay rights organisations and mandating 14-year prison sentences for those suspected of “homosexual acts”. On 24 February, Uganda followed suit. In reality, Wainaina didn’t tell his mother anything before she died. Visa troubles kept him stuck in South Africa, where he had been a student. Instead, he has decided to have the conversation now, through his writing – which is to say, in public. “This is not going to be very good for my love life,” says Wainaina, smoothing the thin blade of dyed blue hair on his head. “The small spaces will be relatively constricted for a while.”

Wainaina speaks animatedly on whatever subject springs to mind. He ranges widely and cracks jokes, becoming most serious when talking about tenses, verbs and literary style (he taught creative writing at Bard College in New York for nearly a decade before returning to Nairobi in 2013).

He had decided to make some kind of announcement nine months ago “but couldn’t find the right language for it”, he says. “I knew I didn’t want to come out in the New Yorker; it just felt wrong. It needed an African conversation.”

In the end, the chapter was published on the website Africa Is A Country, an intellectual platform for blogs that are “not about famine, Bono or Barack Obama”, but are often inspired by the satirical mode Wainaina pioneered in his 2005 essay “How to Write About Africa”.The piece went viral.

It was not only the “crazy laws” that provoked him to come out, but also his father’s death following a stroke in 2011 (Wainaina, too, has suffered a series of minor strokes recently that led to a brain angioplasty) and the deaths of two friends, both from Aids.

“One died in a sense just because he was too ashamed to tell anyone. He said he had throat cancer. This guy had worked as an Aids awareness counsellor with sex workers, but shame cannot be accounted for. It’s not an NGO project.”

After a reading from the next “lost” chapter, a woman at the back raises her hand to ask if homosexual persecution is not a contrivance used by men to claim asylum in the west. The crowd inhales sharply, but Wainaina laughs. “You could always do child soldier,” he says. “It’s very successful.”

Brushing the question aside, he is keen to stress that the reaction he has received has been mostly positive.

“My sense, actually, is that there’s some sense of normalisation going on after the Eighties and Nineties. It’s not toxic to say that things are shit any more. I felt that people were ready to have these conversations, and that’s been my experience.”