Terry Richardson is the fashion world’s open secret. You might not know his name, but you’ll probably have seen his trademark celebrity snaps: slightly overexposed against a white background. He’s shot everyone, from Barack Obama to Justin Bieber, and he’s worked on campaigns with dozens of high end fashion labels. But that’s not the whole story.

In the last few months, I’ve spoken to several women who worked with Richardson and were unhappy with the experience. Take Sarah Hilker, who was 17 when she first met the photographer in 2004. Brandishing a fake ID, she went to a “model search” party for the alternative pin-up community Suicide Girls, where Richardson was shooting.

She tells me that he surveyed the scene, and decided “he was probably the worst type of person to photograph me . . . the images he chose to take at the event were very crass and lewd”. She describes a weird production line, where girls were pushed to undress and play with Richardson for the camera. “There were young women so drunk they could barely stand, never mind be of sound mind to sign a model release form.”

Hilker previously told Jezebel that she was uncomfortable with what she was pressured to do at the event. “In one corner there was a literal pile of SG bras and panties and the other was a small table with model release forms. Some stranger immediately grabbed me and whisked me over to the panties pile meanwhile, another person came over to me and shoved a model release form in my face. They had no interest in seeing my I.D. or even asking me any questions. I was being pushed towards the front of the line to go shoot with their panties and a blank model release form in my hands. I hadn’t even had time to get undressed to put them on.” 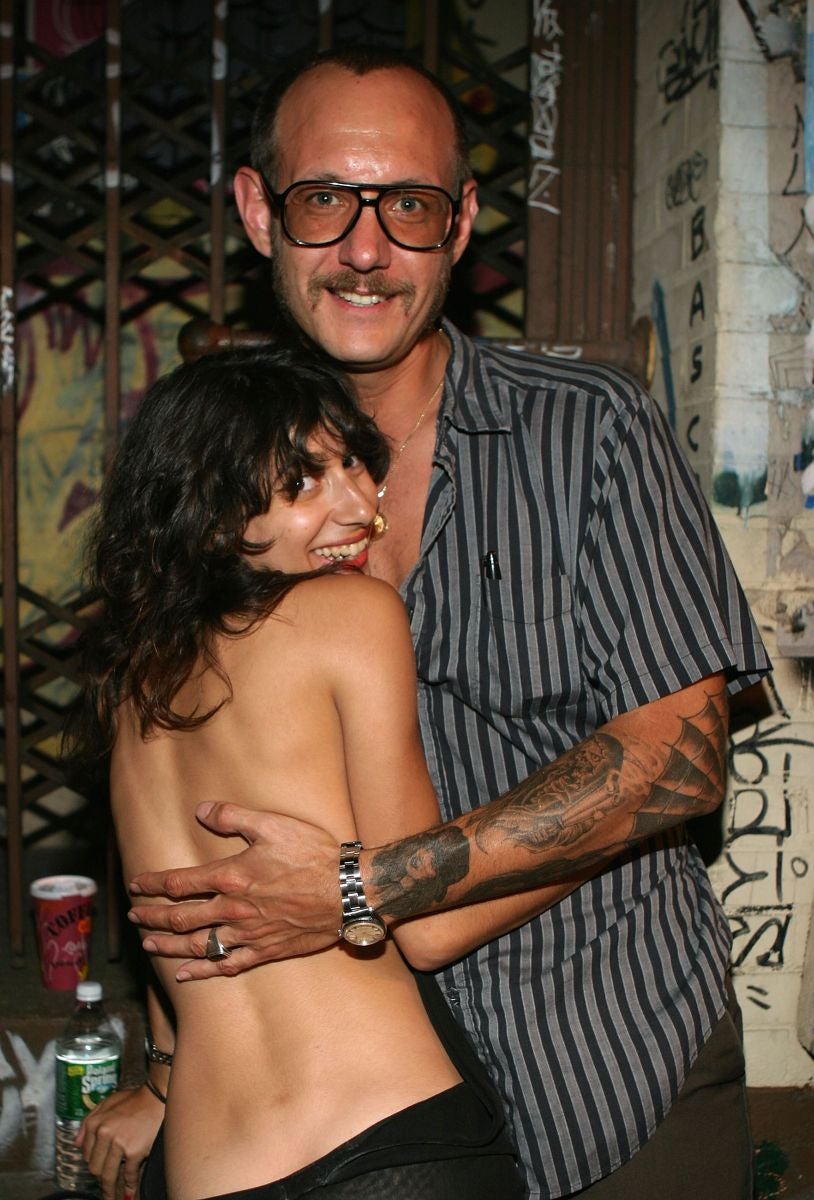 Richardson with his then-girlfriend at the opening of the Terry Richardson Gallery at Deitch in New York, 2004.

Although she has since shot nude, she decided that she did not want to be a part of what was happening, and she did not speak to Richardson at the event. “I feel rather strongly that agencies and companies should not affiliate themselves with a person that mistreats women, who are their biggest consumers,” she told me. “That being said, I also wish that more women were educated and prepared to deal with the hardships that come along with the industry’s coldness, the power of saying the word, ‘No’, with the conviction of walking away, and not regretting it.”

Then there’s Canadian model Liskula Cohen, who walked off a Vogue shoot with Richardson after his requests got more and more explicit. The men joining her on the shoot were not models or actors, they were friends of Richardson. She told me that “he wanted me to be completely naked and pretend to give one of the men a blow job, while he was also naked”.

Cohen says that after she walked off set, she was replaced by another model who gave blow jobs to both men and “they apparently had no qualms ejaculating on her for Terry’s images”. It’s possible that Vogue did not know what was happening on the shoot – although given Richardson’s reputation, they might have been able to guess. “Needless to say I have never shared the images or this story with anyone. I live with this guilt inside of me, that I did something terribly wrong,” she told the blog Girlie Girl Army. “In 24 years of modelling I have only walked out once. He made me feel as if I was a prostitute, a whore or even less then if possible. . . I want other girls who read this to know that if you do something like this, you will survive, but it will haunt you. I have scoured the internet for these images and thankfully they are nowhere to be found. But it haunts me in my own mind. I would hate for my daughter to see these images. . .  That shoot was nearly 12 years ago and it still outrages me, makes me feel queasy, and makes me feel ashamed. I am a 41-year-old mother and this is how my work experience with Terry has left me.”

In a 2010 The Gloss article, ex-model Jamie Peck describes a shoot with Richardson where he asked her to remove her tampon so he could play with it. When she refused, he decided to get naked. “Before I could say “whoa, whoa, whoa!” dude was wearing only his tattoos and waggling the biggest dick I’d ever seen dangerously close to my unclothed person”.

Danish model Rie Rasmussen told Jezebel in 2012 that the girls who work with Richardson “are too afraid to say no because their agency booked them on the job and are too young to stand up for themselves”. Another model who didn’t wish to be named describes Richardson’s ‘creepy demands’ in the same Jezebel post. “Eventually, he had me go down on him and took pictures of him coming on my face, which I had never done before, and when I went to the bathroom to clean up I could hear him and an assistant joking about it, which is when I decided to never tell anyone”. 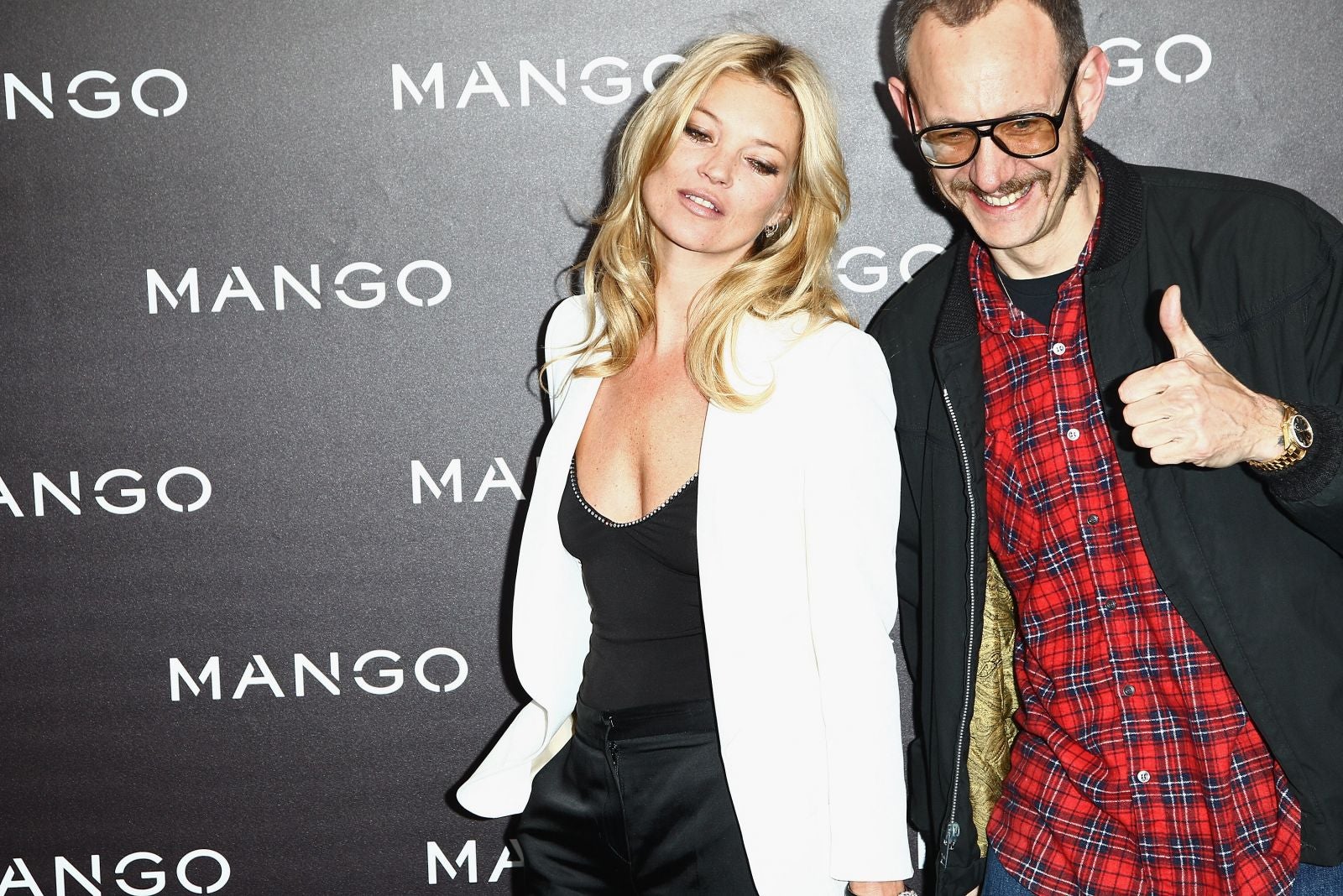 On paper, Richardson’s CV looks great. He has photographed celebrities including Madonna, Kate Moss, Miley Cyrus, Chloe Sevigny, Mila Kunis, the Olsen twins, Beyoncé, the casts of Gossip Girl and Glee, Emily Ratajkowski (one of the models in Robin Thicke’s Blurred Lines video), and Lady Gaga. His work has been published in Vogue, Harpers Bazaar, Vanity Fair, GQ, i-D, Rolling Stone and Vice, and he has been hired by YSL, Marc Jacobs, Tom Ford, Diesel, H&M, Mango, Supreme, Aldo, Jimmy Choo, Sisley and Gucci. The big names want to pose for him, publish him and use his services, this much is clear. The question is why.

It’s difficult to buy the line that top fashion publications and designers aren’t aware of the allegations against Richardson. It’s more likely that they simply don’t want to engage with them when his style is so commercially successful. According to one fashion insider, everyone in the business is aware of the behaviour of “Uncle Terry”, but no one wants to say anything – particularly not teenagers and twentysomethings in an industry where models work freelance with no job security, their next booking dependent on a tight-knit world where everyone knows everyone else.

Terry Richardson famously remarked “it’s not who you know, it’s who you blow. I don’t have a hole in my jeans for nothing”. His non-celebrity pictures, largely using young, unknown models, are often pornographic in nature. He has blurred the boundaries between pornography and fashion advertising more than any other living photographer, and the companies and magazines that work with him know that this is part of his appeal. 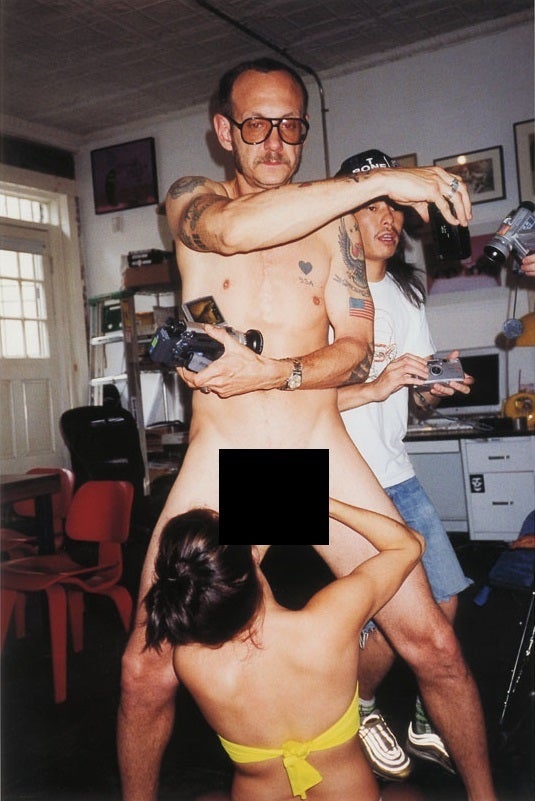 Whatever you think of porn, however, it is an industry which is beginning to be more aware of the potential pitfalls of asking young women to work for older, powerful men. I asked adult performer Zara DuRose about the standards in the industry, and she told me that when she is booked for a job, what goes on in a scene is agreed, in detail and in writing, beforehand. She confirms that “you have to sign a model release and they take copies of two IDs to confirm that you’re over 18 and a copy of your up-to-date health certificates”. She adds: “I’m not afraid to say if there’s something I don’t want to do. People can talk openly about what they want and how they expect things to work. This way you know where you stand and there are no surprises on the day.” In the supposedly more sweet and innocent fashion industry, comparable standards are not always observed.

By all accounts, Terry Richardson is treating models in a way that would be unacceptable in the adult industry, where explicit material is the order of the day. And top fashion brands, big companies and mainstream publications are condoning his behaviour by continuing to use him. Beyoncé, who has spoken of her feminism, has been both photographed by Richardson and used him to direct her music videos. Richardson is protected by his powerful fashion friends, who keep offering him work and publishing his pictures, while the women he has allegedly abused remain voiceless, despite having shared their stories. (In this 2004 New York Observer piece, Vice‘s co-founder Gavin McInnes dismisses objectors to Richardson as “first-year feminist types” before asking of a meth-addicted sex worker with black eyes photographed in Richardson’s show: “How is old she? You think she’d mind if her tits were on display?”) 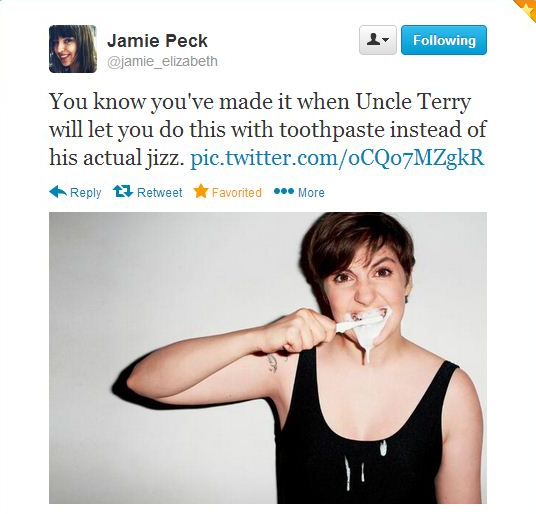 There is currently an 20,000 signature-strong change.org petition calling on big brands to stop using Richardson. H&M have stated that they have no plans to use Richardson now or in the future. Lena Dunham, who has shot and socialised with Richardson in the past, denounced him in a recent Guardian article as an “alleged sexual predator” who she does not count as a friend. Richardson has consistently refused to comment on the allegations made against him.

A jobbing model who needs to work might not have the luxury of turning down a shoot with Richardson. In that case, Liskula Cohen’s advice is “bring a body guard, keep your clothes on, and if he exposes himself call the police”.

The fashion commentator Caryn Franklin describes Richardson as someone who “appears to leverage his postion to ignore professional boundaries when he posts images of himself having explicit sex with young women”.  She says that fashion is an industry that “shows very little concern for the wellbeing of its young models. Agents, editors and designers ignore the online accounts of his predatory behaviour and in refusing to address his dysfunctional approach they are endorsing something that is profoundly wrong”.

Liskula Cohen adds that “as for Vogue and all of his clients, I have no idea why they continue to use him”.