The Greek capital will be closed for the day, nothing to see here, move along. From Panepistimio to Mets, two of the borders of the historic center of Athens, it’s about two kilometres in a straight line. From Acropolis to Mouson Avenue, it’s almost six. These are the borders of the area of Athens where a curfew has been declared for today (see map below). To get a sense of the scale, think of an area in London from Westminster to Holborn and from Marble Arch to Bethnal Green Road.

From nine in the morning till eight at night, the centre of Athens will be under lockdown. No protests or assemblies allowed. This decision (taken by the Chief of the Greek Police no less – not an elected official) was deemed necessary because the German Minister of Finance, Wolfgang Schäuble, will be visiting Athens. To ensure that nothing will hinder Schäuble’s route, or tarnish his eyes with images of dissent, the road that leads from the airport to the Greek Parliament will also be closed while he is on it. 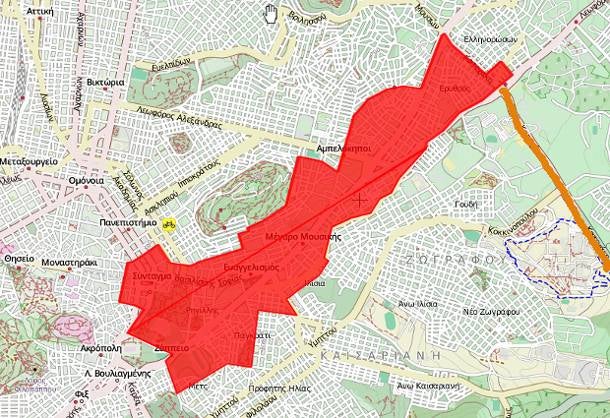 The area of Athens where protests and assemblies are banned today

It is of course not the first time that such measures, which might be called extreme, have been taken in order to provide maximum security for a visiting German official. It was only last October that the Greek capital had to be flooded with riot police, and another curfew imposed, in order for the ungrateful masses of protesting Greeks to be kept at bay for Angela Merkel’s visit. It was the same when riot police were used to stop a small village from protesting the destruction of its natural environment, imprisoning anarchists without trial for longer than the law allows or shutting down public institutions (like say the state broadcaster) on a moment’s notice without a vote in parliament. It is not, of course, incompatible with democracy to take away basic rights from a people, in order to show your benefactors (be they businessmen or governments) how grateful you are. The Greek coalition government knows very well where its lifeline comes from.

But one can’t help but ask – as both the German and the Greek government alike have been declaring lately – if the Greek “success story” is true, why is such protection (usually reserved for dictators and conquerors) needed at all? Wolfgang Schäuble is certainly none of those things. At his very worst, Wolfgang Schäuble might accept the odd DM 100,000 cash donation from the occasional arms dealer and be forced to resign from the leadership of his party, just like he did back in 2000. It is but a flesh-wound.

Maybe it’s because a lot has changed since then. Most of all, the very nature of the political system we call “democracy”. Greece’s Troika of lenders (comprised of the EU, the ECB and the IMF, but spearheaded financially and ideologically by Germany), in their efforts to close the country’s financial deficit, has created and perpetuated a most despicable, and harder to close, deficit: one of democracy.

Instead of an open forum, like the one my country supposedly gave birth to, where everyone gets a say, the version we’ve been witnessing in Greece is more of the “elections during which German newspapers publish articles in Greek, warning voters not to vote for left-wing SYRIZA” kind. This is the version where meetings need to take place behind closed doors, and visiting politicians need to be kept away from the unruly mobs who seek to stain the beautiful fairytale of hardship, punishment and reward the virtuous Angela Merkel desperately needs on her way to the German elections to be held this September.

We shouldn’t go very far as to why this protection is needed though. The privatisations programme has brought the Greek government nothing but shame. Unemployment now stands at more than 28 per cent, and an expected drop of more than 70 per cent in tax revenue during the month of June is predicted to blow a hole in the budget of almost a billion euros. All of these things threaten the government’s spin.

Greek and German politicians refuse to acknowledge this. Yiannis Stournaras, the Greek Minister of Finance, declared in a more than straightforward way that “there is no problem, we’re seeing improvement”, despite the Troika’s damning report on the progress made. A multi-bill that pushes through “necessary” reforms (namely cuts, lay-offs etc) has been rushed through the parliament, and voted by a slim majority of 153 out of 300 MPs. The only success the government has to show from the negotiations with the Troika is a reduction in the VAT on services which will apply from August, but already restaurant owners have said that it won’t change prices, as they have absorbed damages from the 10 per cent hike in previous years.

When faced with these tough questions, ministers of the government, like Nikos Dendias on the BBC’s HARDtalk a couple of weeks ago, stick to their line and claim we’re seeing light at the end of the tunnel. But it takes heavy policing, the closing down of tube stations, the enforcement of a curfew unlike any a democratic country should witness, and tight control of all mainstream media for this spin to take hold. It is this very behaviour by both the Greek and the German governments that provokes the Greek people to take to the streets. A call for a gathering in Panepistimio has already been sent out for this afternoon.

Greece cannot afford luxuries, both literally and metaphorically. No matter what happens, whether riots, demonstrations or absolutely nothing takes place, the impression left behind in this instance is pretty clear: there is no room for democracy, freedom of expression and democratic procedures in this state of constant emergency. And if the Greek budget shows a primary surplus this year, itself highly unlikely, the democratic deficit created by these past five years of austerity and authoritarianism will take generations to close.