Lubna Lal is not your traditional politician. Better known to the residents of her home town of Jhelum, in Pakistan’s Punjab province, as Madam Lubna, dancing girl, she is one of the country’s first ever transgender election candidates.

Transgender people, known colloquially as hijras or khusras, are a long-standing part of South Asian society. In Pakistan, there are an estimated 500,000 members of this community, which includes castrated men, intersex people, transsexuals, and transvestites. They are a traditionally marginalised group, who make a living by begging and dancing at weddings or other events.

In previous elections, they have been unable to vote, because they were not willing to classify themselves as men to receive official documentation. However, in 2011, a Supreme Court ruling recognised them as a third gender – neither male nor female – which allows them to get ID cards, cast votes, and stand as candidates. The 11 May election will be the first in Pakistan’s history which includes transgender candidates.

“We are poor people,” says Lal, who is standing for a seat in the Provincial Assembly. “I don’t have any vehicle so I am going door to door campaigning on foot or by rickshaw.” She stops and laughs. “The other candidates are big crocodiles and I am just a simple cow.”

Like many hijras, Lal lives with other members of the community. Unlike most transgender people in the west, South Asian hijras strongly identify as a third gender – rather than as male or female. They even refer to themselves as “shemales”, a term considered highly derogatory in the west because of its association with pornography and the sex trade. Despite this distinct identity, hijras use the female pronoun because there is no neutral alternative. They have their own social norms – all dress in women’s clothes, and many have undergone castration – but a range of identities come under this umbrella.

During my interview with Lal, two younger hijras sit on a mattress on the floor, occasionally pitching in. Others come in and out of the small one storey house, which has pink walls and a huge poster of Madam Lubna as a young dancer. Many of these women are estranged from their families, and joined the hijra community in their teens (Lal was 15). As a result, these groups are tightly knit. When older members of the community are too old to make a living from dancing at functions, the younger ones support them.

Lal says that she has not encountered any hostility from the local population. “I have been living in this area for the last 35 years so people know me. I am standing as a shemale but not just for my own community. I want to help poor people and improve education, health services, and sewerage. The poor people of this area are happy I am standing.” However, as she is talking, the odd detail comes out: people have defaced and removed some of her election posters, and her Facebook account was recently hacked.

Other transgender candidates have faced a more direct threat. Bindiya Rana is standing for the Provincial Assembly in the southern city of Karachi, where there is a large hijra community. For the last five years, she has been a social worker, helping not only transgender women, but rape victims and the unemployed. Rana had to fight to get her nomination papers accepted by the Supreme Court. It was initially rejected by the Election Commission on the basis of her gender, but an appeal ruled in her favour and she has been allowed to stand. “My victory was when I successfully filed those nomination papers,” she says. “I feel I have already won.”

Like Lal, Rana has lived in her area for many years, and claims that most people have received her candidacy well. “They want to talk about sewerage, bad hospitals, lack of education, lack of medicine, not about my gender,” she says. “They know I have been working for this community for a long time.”

But not everyone feels that way. “In the last three weeks, since my candidacy was accepted, I am receiving phone calls from unidentified numbers. They say ‘maybe you will not live to see the 11 May’ and tell me not to participate in the election. Now I don’t sleep in my own house at night, I go to stay with other shemales. But I believe in God and I am not scared of anybody.” 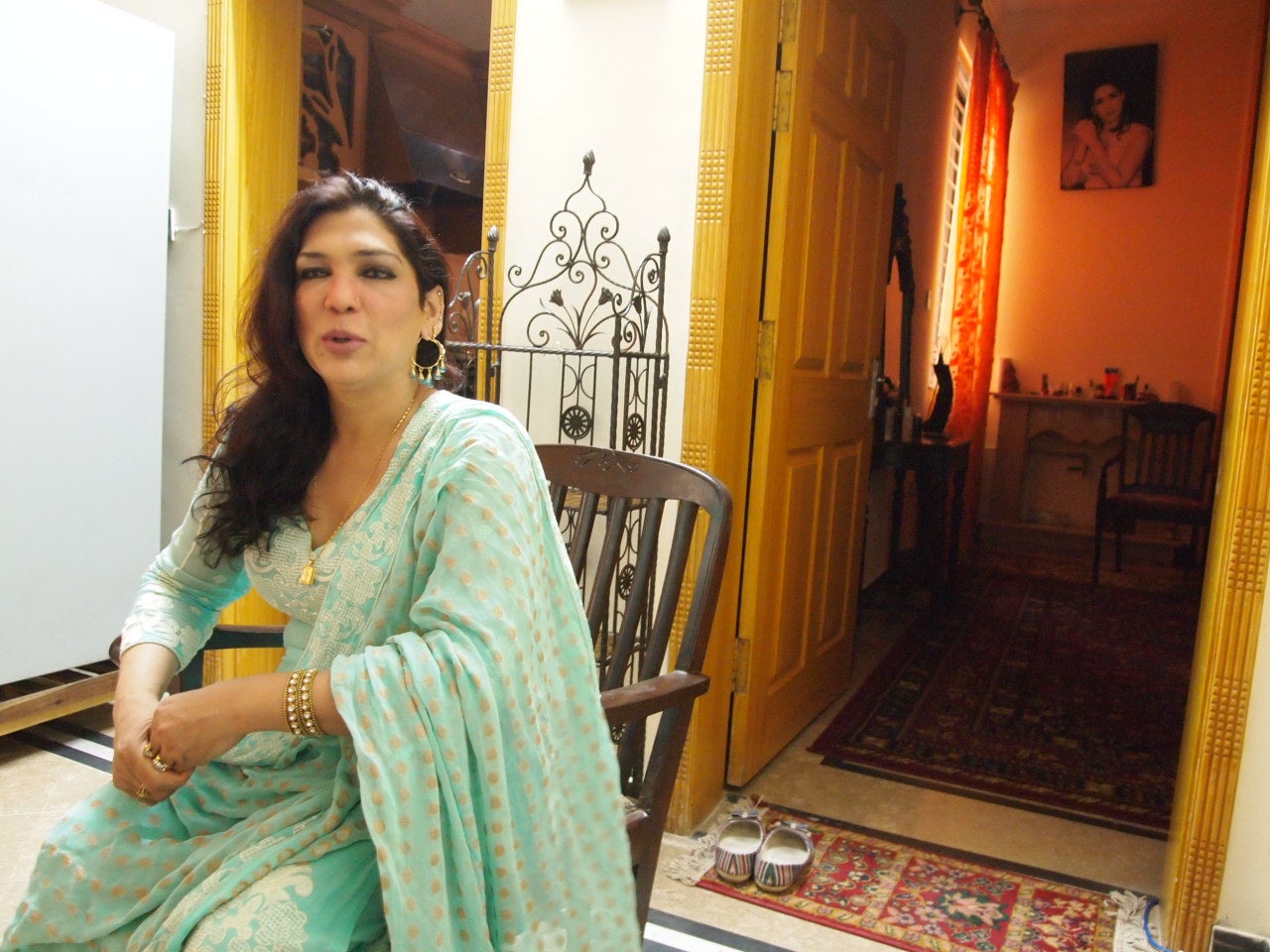 Transgender women occupy a strange place in South Asian society. To an extent, they are accepted – perhaps more than one might expect in a socially conservative country like Pakistan. Yet they also stay within their predefined social roles. “It is an ambiguous space,” explains Dr Anuja Agrawal, a sociologist at Delhi University and author of Gendered Bodies: The Case of the ‘Third Gender’ in India. “There is a place for them, where they are allowed to come at auspicious occasions and people think it’s okay to give them money. They are on the periphery of society, yes, but that periphery is very much part of the structure as a whole.”

There is a deep-seated belief, particularly in less educated areas, that hijras have the power to bestow curses or blessings. According to a study by Dr Humaira Jami, lecturer in psychology at Islamabad’s Quaid-e-Azam university, this is rooted in the religious belief that God bestows the unfortunate with special powers. The folklore goes that if you do not give money to hijras on the birth of a son, they will claim him for their own.

Unable to find normal employment, transgender women frequently have no option but to rely on begging or to turn to sex work. The fact that transgender women are contesting this election is one step on the road towards stepping out of this marginalised social position.

“It has been very hard for hijras to get integrated into the modern economy,” says Agrawal. “They are not totally rejected by society, but it is hard for ambiguously gendered people to move out of their traditional roles. Standing in elections is definitely important: it reflects an attempt to get integrated into modern democratic institutions and expand one’s sphere of influence.”

Almas Bobby is the head of the Pakistan Shemale Foundation, an organisation she started in 2004 to protest for the rights of transgendered people. She is an articulate trans-woman who speaks good English and slips easily into amusing impressions of prominent public figures and her own co-workers.

“Before in Pakistan, there was no concept of our community having rights,” she says when we meet at her spacious house in Rawalpindi. “The main problems were harassment by dirty men, and police harassment. They would come to our houses, rape us, burn our hair, and the police did nothing. Even civil society didn’t accept us, because we are just seen as fun.”

The tide turned in 2004, when transgender women started to protest at police stations when their community members were attacked. This resulted in the first arrests of men for harassment. All the candidates I spoke to agreed that the situation has improved even further since the 2011 Supreme Court ruling that granted them ID cards and the associated legal rights.

“Before there were terrible problems,” says Lal. The two women who live with her nod agreement as she describes men banging on their door at night, trying to get in, and routine harassment on the streets. “But now it’s much better, since we have our legal status. They are afraid to bother us.”

Across the border in India, hijras were granted voting rights (with a similar “third gender” classification) in 1994. In 1998, Shabnam “Mausi” Bano was elected to the state legislative assembly in Madhya Pradesh, where she remained an elected politician til 2003. Hijras have since established their own political party, Jeeti Jitayi Politics (JJP), which translates to “politics that has already been won”.

Out of a total field of 23,000 candidates standing for the Provincial and National Assemblies in the 11 May polls, transgender candidates make up just six or seven. They are all standing independently of any political party. Resham, who like many hijras goes only by a first name, was standing for the National Assembly in the Shekhapur area of Punjab. She tells me she withdrew her papers after one of her rivals promised to take action to protect hijras in the area if she agreed to step down. But Rana, Lal, and other candidates, are continuing their campaigns, tirelessly walking from door-to-door and lobbying their neighbours for votes.

“This is the first drop of rain, I know,” says Bobby. “But if we do not have success in this election, then next time, next time, next time. In Pakistan’s 65 years, the women have not completed their struggle for rights. We are a third gender. It will take time, but we hope it will be good for the next generation.”