Yesterday, one twitterer with a relatively sizeable following was single-handedly responsible for a number of false – and some might say dangerous – rumours about Hurricane Sandy.

@ComfortablySmug has a little over 6,000 followers, enough to get a heavy head of steam behind the rumours he started. BuzzFeed‘s Andrew Buchanan collected them all together in a glorious montage of lies: 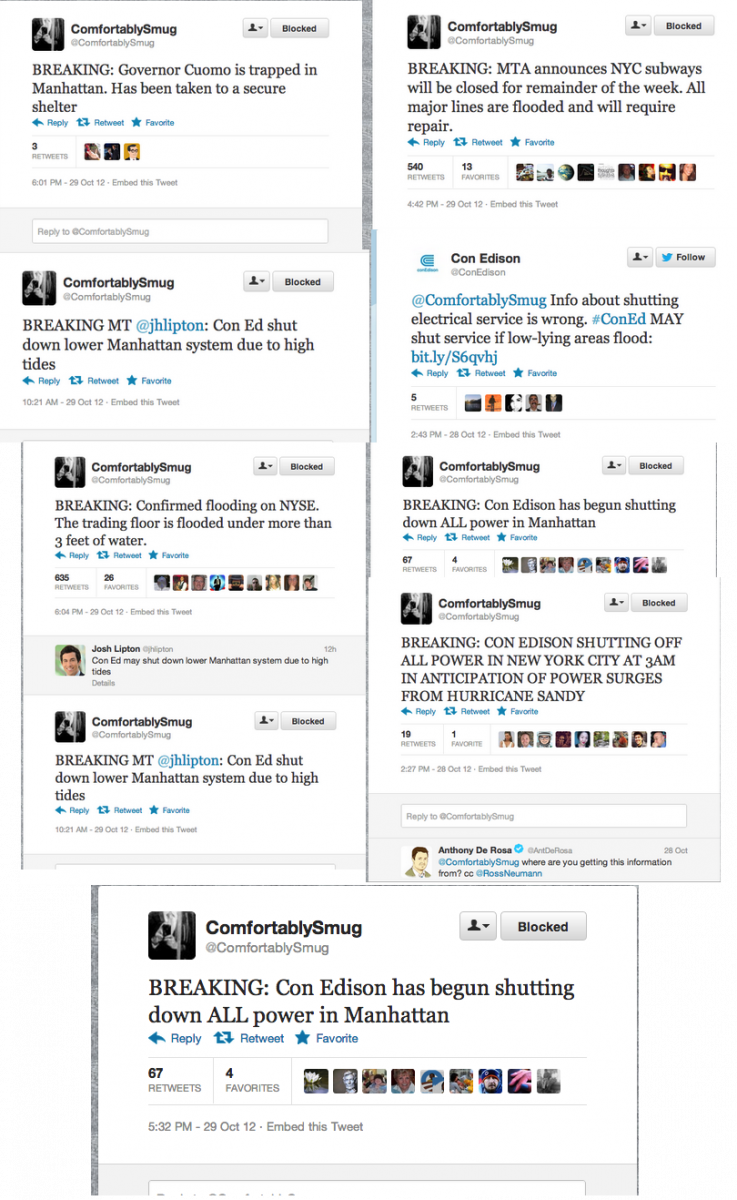 (Interestingly, at least one of his tweets – the claim that the MTA had announced that subways would be closed for the rest of the week – was false at the time but has since gained a kernel of truth. New York’s Mayor Bloomberg told press that it could be four or five days before the subway system was back up-and-running.)

BuzzFeed‘s Jack Stuef did some detective work based on images that Smug had tweeted and found out his real identity:

@comfortablysmug is Shashank Tripathi, a hedge-fund analyst and the campaign manager of Christopher R. Wight, this year’s Republican candidate for the U.S. House from New York’s 12th congressional district.

FEC documents show Wight has paid Tripathi thousands of dollars this election cycle as a “consultant.” @comfortablysmug has been a vocal supporter of Mitt Romney and posted tweets suggesting he attended this year’s Republican convention. He’s listed here by a local Republican group coordinating volunteers for a Romney phone bank. He’s 29 years old.

What’s interesting about the unmasking is that it hasn’t drawn anywhere near the condemnation that other examples of “doxxing” have. When Adrian Chen revealed the real name of ViolentAcrez, the erstwhile moderator behind Reddit’s jailbait and creepshots forums, it generated hundreds of column inches (well, mostly online – column pixels?) discussing the morality of his actions.

The debates are still going on weeks later; Danah Boyd wrote in *Wired* yesterday that:

More often than not, those who use these tools do so when they feel they’re on the right side of justice. They’re either shining a spotlight to make a point or to shame someone into what they perceive to be socially acceptable behavior. But each act of outing has consequences for the people being outed, even if we do not like them or what they’ve done.

This raises serious moral and ethical concerns: In a networked society, who among us gets to decide where the moral boundaries lie? This isn’t an easy question and it’s at the root of how we, as a society, conceptualize justice.

Similar debates surrounded Predditors, a tumblr dedicated to linking the pseudonymous accounts of people who posted creepshots to their real identities, and the inaccurate doxxing by Anonymous of a man they accused of harassing Amanda Todd to her death.

In each case, the reaction has been tempered by the extent to which the outing is seen as “journalistic”. Predditors is run by an anonymous group, who publish doxxes which, while performed in an extremely similar manner to the detective work Stuef applied in unmasking ComfortablySmug, do not conform to “best practices”. They offer no right of reply, do not check with the accused before publishing, and take aim for what many consider to be relatively minor infractions (many of those featured are not even prolific contributors to the subforums). As a result, it is this site’s policy not to link to the blog.

But even Chen, who followed all the guidelines, faced criticism from Boyd and others. The general attitude was that this constitutes vigilante justice; that the unmasking can only be happening for punitive reasons.

But why no similar reaction for the outing of Tripathi? After all, in both cases what the trolls did was unbearably prickish, but limited largely to words. It’s possible to argue that Tripathi’s trolling was closer to the archetypal “shouting fire in a crowded theatre”, and thus had physical consequences; but it’s also possible to argue that ViolentAcrez, who was active for years more and far more prolific, contributed to a culture which nurtured attitudes certain to result in harm in “the real world”.

The distinction lies in who Tripathi was revealed to be. Like it or not, anonymity in politics is truly dead. If you have any link to any political party, no-one is going to defend your right to be a pseudonymous dickhead on the internet.

At the end of the day, though, Tripathi is still being punished for his actions; and BuzzFeed is not, yet, a judge. Whether the same people who lined up to attack Chen will take potshots a Stuef, though, seems unlikely.