Well this could get interesting.

An anonymous person or persons on the internet (that most credible of sources) claims to have broken into a Tennessee branch of PriceWaterhouseCoopers, and stolen copies of Mitt Romney’s tax returns. In their first message, released on Sunday, they write:

Romney’s 1040 tax returns were taken from the PWC office 8/25/2012 by gaining access to the third floor via a gentleman working on the 3rd floor of the building. Once on the 3rd floor, the team moved down the stairs to the 2nd floor and setup shop in an empty office room. During the night, suite 260 was entered, and all available 1040 tax forms for Romney were copied. A package was sent to the PWC on suite 260 with a flash drive containing a copy of the 1040 files, plus copies were sent to the Democratic office in the county and copies were sent to the GOP office in the county at the beginning of the week also containing flash drives with copies of Romney’s tax returns before 2010. A scanned signature image for Mitt Romney from the 1040 forms were scanned and included with the packages, taken from earlier 1040 tax forms gathered and stored on the flash drives.

The group will release all available files to the public on the 28 of September, 2012

A follow-up message, released on Tuesday, turns the story from a threat to blackmail attempt. The author demands $1m – in bitcoins! – or they will release the returns. They also offer to guarantee the release of the returns if they are sent $1m to a different bitcoin account:

All major news media outlets are going to be sent an encrypted copy of the most recent tax years that your company had on file since you did not have them all in a convenient electronic form. The years before 2010 will be of great interest to many. If the parties interested do not want the encrypted key released to the public to unlock these documents on September 28 of this year then payment will be necessary.

The deal is quite simple. Convert $1,000,000 USD to Bitcoins (Google if if you need a lesson on what Bitcoin is) using the various markets available out in the world for buying. Transfer the Bitcoins gathered to the Bitcoin address listed below. It does not matter if small amounts or one large amount is transferred, as long as the final value of the Bitcoins is equal to $1,000,000 USD at the time when it is finished. The keys to unlock the data will be purged and what ever is inside the documents will remain a secret forever.

Is it real? PWC have released a not-quite-denial, but confirmed that they are working with the Secret Service, so someone is taking it seriously:

We are aware of the allegations that have been made regarding improper access to our systems. We are working closely with the United States Secret Service, and at this time there is no evidence that our systems have been compromised or that there was any unauthorized access to the data in question.

Interestingly, while the thief claims to have sent proof to the county Republican and Democratic parties, TPM reports that neither of the groups have actually used the USB drives they were sent:

Burr, the Democratic Party Chairman, said he had kept the USB drive in his briefcase. At one point, Burr said, he considered plugging the drive into an old computer, but he said the “last thing I wanted to do was plug it in to a computer that I cared about.”

The Secret Service is now in possession of the drives, leaving the one loose thread dangling. What was on them? Will we ever know?

Seperately, however, something more obviously hoaxy is going around. This image is almost certainly not of Mitt Romney’s tax return: 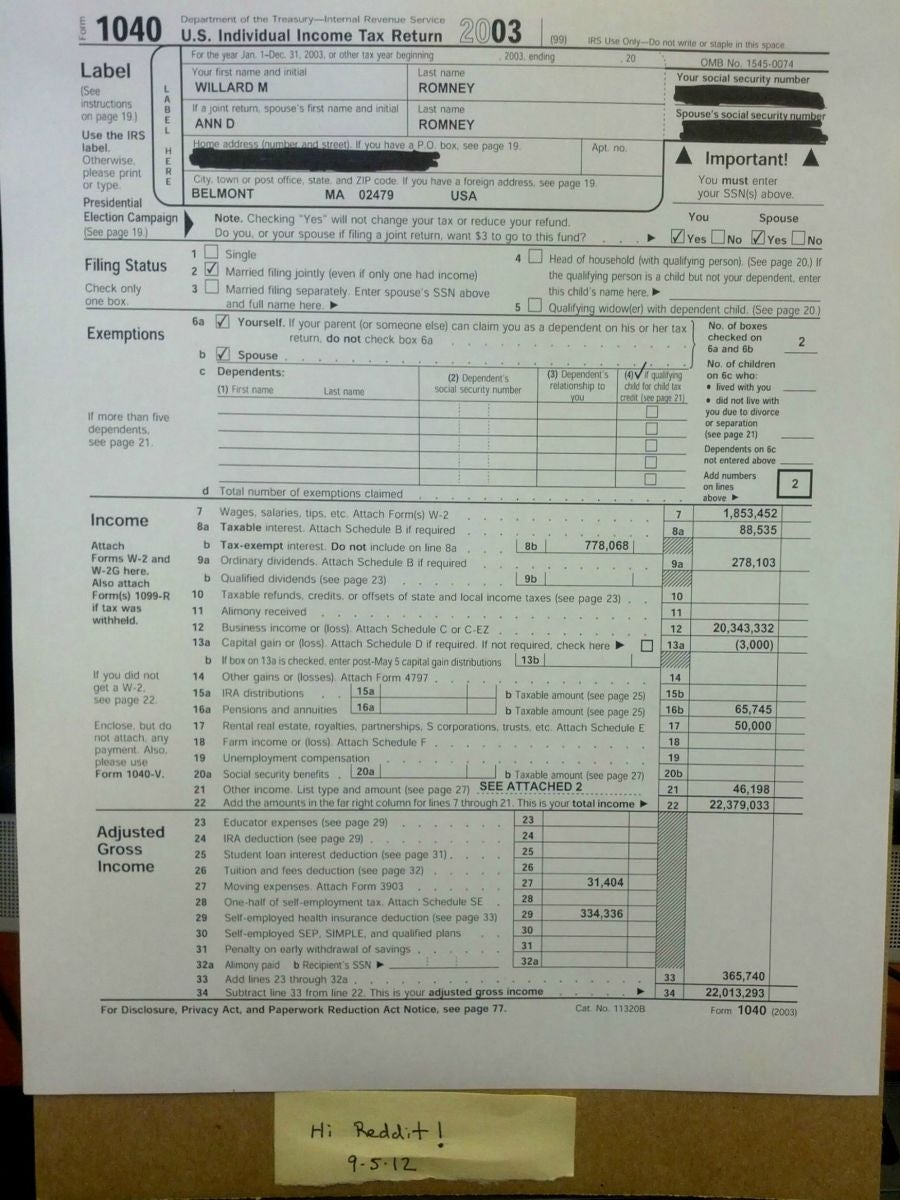 Quite apart from giveaways like the fact that Mitt Romney’s accountant ought to be fired for running $20m as “business income”, when he could have saved $4m in taxes by marking it up as “capital gains” instead, the return is also incredibly easily faked. Here, for instance, is the 2003 return for Mr A. Hitler: 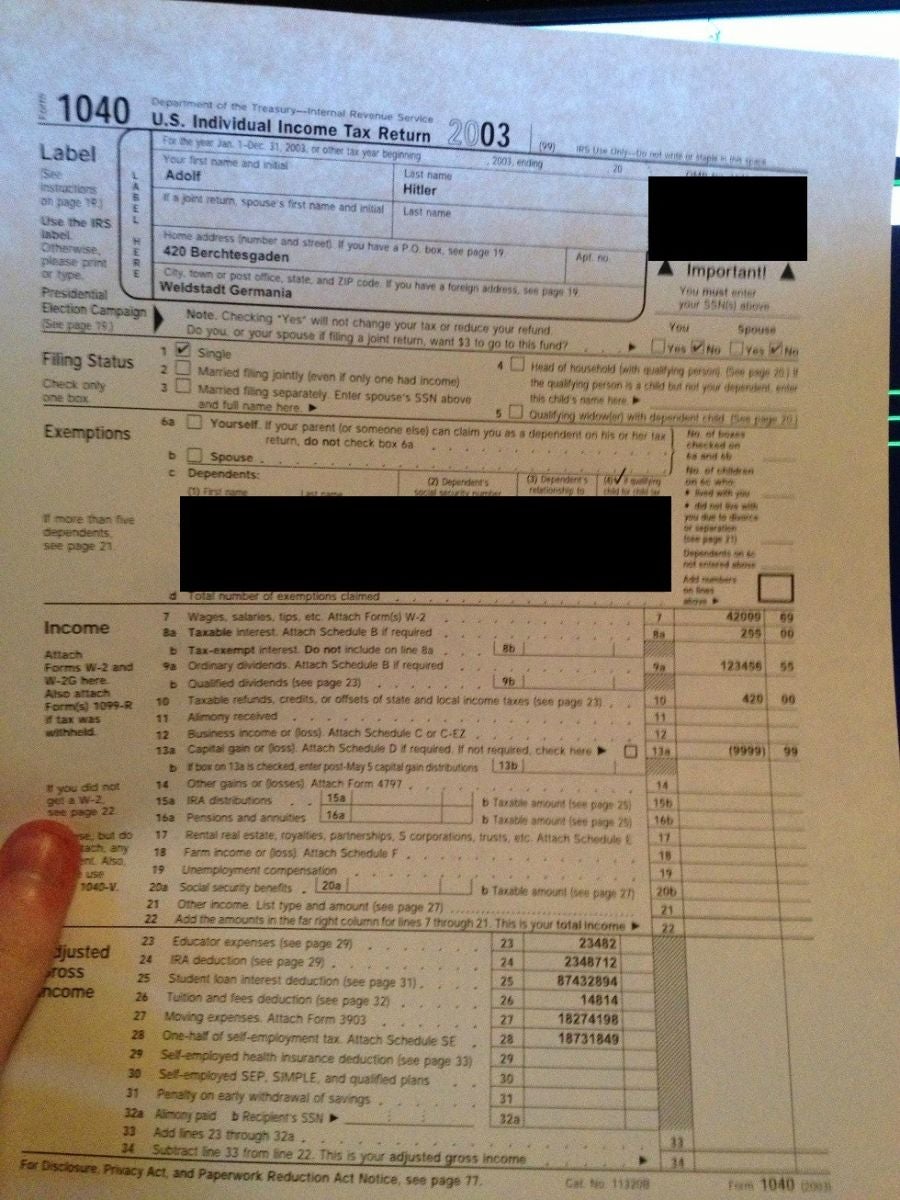 Other giveaways include the fact that Romney’s actually released forms were filled in with a typewriter, not a laser printer, and that the numbers in the fake return don’t actually add up. Literally. There is $343,332 missing from the “total” column.