It’s 3.38 on a September morning. I’m scuttling along my local high street in east London in the blue-black dark, surprised to find that the stallholders are already setting out their wares for the day: clear plastic tubs of fruit and veg, a rail of parkas with a scribbled sign promising The Best £5 Coat You Will Ever Buy. In the distance, the bus station shimmers like a miniature city. I hop on the N26 into central London, finding a spot at the front of the top deck, where I wipe a porthole in the steamed-up window. Within a few stops it’s standing room only, the seats and aisles jam-packed with dawn workers and luggage-laden tourists. And me, on my way to Tate Modern to watch every last second of the 24-hour video installation The Clock.

Between 2007 and 2010, the artist Christian Marclay and a team of researchers scoured tens of thousands of films for scenes and shots in which time was in some way incorporated. It could be a close-up of a watch or a sand timer, the $10m four-faced opal clock at New York Grand Central Station or a novelty timepiece showing two pigs humping merrily (from Mighty Aphrodite). Better yet, it might be an instance in which time plays a pivotal role: the clock tower struck by lightning in Back to the Future, or Harold Lloyd clinging to the minute hand high above Los Angeles in Safety Last!

Marclay had in mind a more ambitious concept than the sort of themed compendium routinely found on YouTube – “Every Single Nicolas Cage Laugh”, say, or “Highlander: All the Beheadings”. The installation, which has been touring the world since its premiere in 2010, isn’t simply named after a timepiece – it is one. When that clock tower reads 10.04pm there is no need to check the time because it’s right there on screen. Marclay has found a shot representing almost every minute in the day. And where he hasn’t – in the wee small hours, where time-stamped footage is harder to come by – he has had to get even more creative, transplanting dream sequences (American Beauty, Spellbound) or conjuring his own from existing clips. Thinking outside the bed, you might say.

It’s a work of astonishing, multi-textual ingenuity, with Marclay deploying his DJ skills to make everything cohere sonically. It’s also a ticking, tocking metaphor for mortality. And to get down to basics, it’s a computer program that can only run in sync with the actual time. Anyone who wants to see Bill Murray wake at 6am in Groundhog Day has to be there – here, in this case, at Tate Modern – at 6am to see it happen. There’s no way to beat The Clock.

Spread out before me are many rows of bone-white sofas illuminated by the screen. Nine or ten are occupied by slumped or sleeping figures, the rest are empty. As a film critic, it goes against my nature to enter a cinema when the movie has already started. But there’s no other way to watch The Clock. It has no opening credits or closing ones, no first scene and no last – only the subjective start that each viewer brings to it upon entering, and the conclusion dictated by that same viewer’s point of departure. There’s no need to ask your neighbour: “What did I miss?” It’s like life: it was going on long before you got there, and it will carry on once you are gone. (Tate’s press officer, Kitty Malton, confirms that The Clock never stops: “The system continues to run just like a normal clock,” she tells me, “though we do turn the projectors and sound off to protect the lamps when nobody is there.”)

As I take my seat at 4.55am, Clint Eastwood is giving marines a rude awakening in Heartbreak Ridge: “Drop your cocks and grab your socks!” he barks. William Holden is floating face-down in a pool in Sunset Boulevard just after 5am, and at 5.15am a stoned Bill Hader in Pineapple Express is asked how he feels. “Like a slice of butter melting on top of a big old pile of flapjacks,” he purrs. I stay for five hours in my first shift. It’s disconcerting seeing so many people woken by their alarms or trudging through gloomy streets, since it mirrors my morning so far. When Katharine Hepburn and Spencer Tracy have breakfast in bed in Adam’s Rib, my tummy growls in protest. But as hordes of people make their way to work on screen, I feel relieved that I’m watching The Clock rather than punching it.

Marclay has warned that viewers tend to notice the time with “distressing frequency” once they have left the gallery. I can vouch for that. I watch nine hours of The Clock in two sessions in that first week, and soon I am spotting clocks everywhere, or finding it odd when there aren’t any. It takes over my life a little. As I head out to watch another chunk, my boyfriend stops me.

“I thought you’d already seen it all?” he says.

“Well, you’ve definitely been talking about it for longer than that,” he sighs.

I take my time seeing the rest, measuring it out over two months. I’m impressed by how the principle of cause and effect is used to lasso together unconnected clips, such as when the bus blowing up in Hitchcock’s Sabotage appears to knock a picture off the wall and on to Oliver Hardy’s head. Watched over a longer stretch, though, The Clock destabilises any certainties of “before” and “after”, “earlier” and “later”. It brings performers back from the dead, reverses or accelerates the ageing process, restores at 7.55pm the same Twin Towers that were burning at 9.05am (or vice versa, if you see the evening section first). It even transports us through time, back to an age when it was acceptable to watch certain actors without feeling icky. Waking up in bed at 6.48am in Bird on a Wire, Mel Gibson says: “Something’s gone wrong. I don’t seem to exist any more.” Welcome to the future. 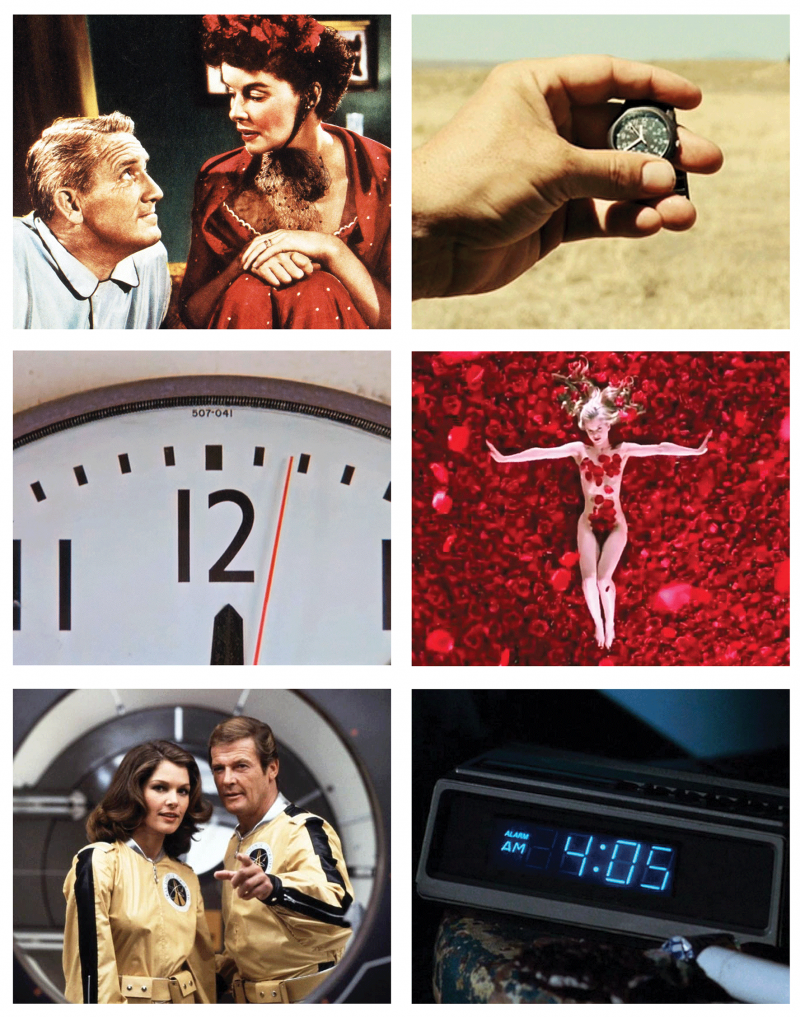 Time travel: scenes (top to bottom) from Adam’s Rib, American Beauty and Moonraker, alongside stills from The Clock

Marclay claims not to be a cinephile but he manipulates our expectations in fascinating ways. When Peter Sellers goes to open a fridge in The Return of the Pink Panther, we expect Burt Kwouk to leap out and attack him. But before that can happen, Marclay cuts to Roger Moore fighting off Toshirô Suga in Moonraker. A comment on the inherent racism of British cinema or harmless mischief? Marclay also manages to fix times that have never been specified, and make unrelated films appear to occupy different parts of the same day. Everyone knows Robert Duvall loves the smell of napalm in the morning, but did you ever wonder exactly when that might be? It’s 8.09am according to this clock. And when did Orson Welles gasp “Rosebud” and let the snow globe fall from his hand in Citizen Kane? At 5.41am, just a few hours before Duvall launched his chopper attack in Apocalypse Now.

The late shift shows The Clock at its most concentrated and intense, and the audience in its most anarchic state. Entrance is free but capacity is limited to around 150, so waiting times can be long. From 10.30pm, no one leaves for a couple of hours: they’re here to see in the new day, midnight being the closest thing this endless film has to a climax.

Once Big Ben has been obliterated (V for Vendetta) and Orson Welles killed by an ornamental clock (The Stranger), a few people scarper. New audience members arrive, snubbing the Ikea sofas in favour of the floor. “It’s two o’clock in the morning, I don’t know what I’m reading any more!” whines Gene Wilder in The Producers. Someone on screen says “Big boys stay up late,” prompting an approving whoop from the front and laughter from everyone else. A clock plummets from a balcony (Rear Window) and another is dumped on a fire (Memento). By 4.50am, the woman beside me is adding her snores to the general rumble in the room. She is about to use my shoulder as a pillow when I hear some familiar words: “Drop your cocks and grab your socks!” This is where I came in…

The Clock is not perfect. It has one deep flaw: an abundance of television clips, which undermine its aesthetic integrity and continuity. We are accustomed to 24-hour TV, whereas the radicalism of The Clock relies on the impossibility of a never-ending movie. TV runs on and on – runs away with itself in fact, – while film is about compression, distillation, essence. Every creative work needs its own internal rules and restrictions, and whenever Marclay throws in another clip from Columbo or The Twilight Zone, ER or Extras, the brilliance is diluted. It’s as if he were topping up a bottle of Châteauneuf-du-Pape with Ribena.

But in the course of its 24 hours, there is so much to admire. I love the wittiness of the excerpt from A Nightmare on Elm Street in which Heather Langenkamp sings a creepy playground rhyme: “One, two, Freddy’s coming for you…” When she reaches the last line – “Nine, ten, never sleep again” – you can set your watch by her: it is indeed 9.10pm. And I adore its constant countdowns that never lead anywhere, the tension building only to dissipate without resolution (could it be any more like life?).

It is littered with dialogue that comments on itself: “This is the clock? What’s so special about it?” There’s even the cuckoo clock speech from The Third Man, in which Orson Welles complains that the Swiss have produced nothing of value. (Marclay is Swiss-American.) During one of my last viewing sessions, around 5pm, it is Michael Douglas in Don’t Say a Word who delivers the sanest line I’ve heard in months, advice I’m going to stick to now. “No more clock,” he says.

“The Clock” is at Tate Modern, London SE1, until 20 January