Historic moments are supposed to give rise to soaring rhetoric, memorable speeches that capture the zeitgeist and harness momentum, but listening to Nicola Sturgeon’s keynote speech at the SNP’s spring conference on Saturday afternoon, one could be forgiven for thinking a second independence referendum was just another election.

To be fair, angry tub-thumping speeches aren’t really the First Minister’s style, but even so all she offered in the midst of a constitutional crisis was the usual blend of virtue signalling, Tory bashing and paeans to Scottish exceptionalism. “Our country stands at a crossroads,” she declared at one point, but it didn’t feel like it.

As on Broadway, standing ovations come easily at such gatherings, and there were several during the SNP leader’s 45-minute address. “There will be an independence referendum” earned the first, as did an allusion to Mrs Thatcher (“Those days are gone and they are not coming back”) and a dig at the Prime Minister’s “politics is not a game” comment.

The political purpose of the speech was an appeal beyond the party faithful, which is something of an ecumenical Sturgeon motif. “Our job is not to talk to each other,” said the First Minister, “it is to reach out to those not persuaded – to put ourselves in their shoes.” Implorations followed to “establish common ground” and “build consensus”, to argue the nationalist case with “courtesy, understanding and respect”.

And it was her job, added Ms Sturgeon, “to lead you by example”, although if any delegates had been watching the First Minister field questions in the Scottish Parliament a few days earlier they’d have witnessed a particularly tribal example. Then there was some more empathy. For every person “full of excitement and anticipation” at the thought of another referendum, there was someone else “feeling nervous and anxious, perhaps even resentful”. 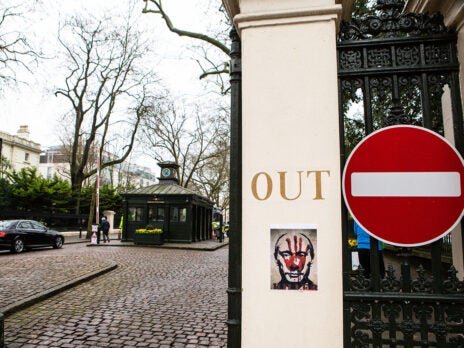 But if the SNP leader’s intention was to reassure that latter group, her speech didn’t really succeed. “Increasingly right-wing, Brexit-obsessed” Tories were bad, said Ms Sturgeon, thus losing nearly a quarter of the electorate, while Labour – an “embarrassing shambles of an opposition” – fared little better, thus losing another sizeable minority.

There was a solitary olive branch. Although the Prime Minister was urged to recognise the “will of the democratically-elected Parliament of Scotland”, if Mrs May had a “concern” about the timing of a second referendum, “then – within reason – I am happy to have that discussion”, a clear sign that the six-month window set out early last week was meant as a negotiating position.

A later section of the speech sounded promising, when Ms Sturgeon said the people of Scotland deserved “to hear us speak frankly about the challenges facing the Scottish economy” and the “challenges of independence”. Nationalists should “embrace”, she added, “that scrutiny”. This, however, was swiftly undermined by a warning that no one should “ever seek to run down Scotland’s strengths and our nation’s great potential”, otherwise known as “talking Scotland down”.

There were several spending commitments, including millions for mental health. “We can do all these things to improve the lives of the people of Scotland,” explained Sturgeon, “because we are in government.” Sure, but also because of something called the Barnett Formula. Of that we heard little other than that sizeable “fiscal deficit” having been created “on Westminster’s watch”. The “best way to deal with it”, offered the First Minister, was not allowing London to keep “making the same mistakes over and over again”, which was a funny way to describe higher per-capita spending on public services.

And, as usual, economic policy was reduced to platitudes. An independent Scotland, explained the SNP leader, would “build, grow and innovate” its way to a “stronger and more sustainable future”, one that kept “faith” with “values of social justice”. The only specific example was better use of “cloud technology and big data”, which the First Minister reckoned would boost the Scottish economy by £5 billion a year.

Scotland, added Sturgeon, wasn’t “full up”, predicting it would become a “magnet for talent and investment from all across the UK”, code for “we don’t hate the English”. This was a reference to her plan to keep Scotland inside the European Single Market, if not necessarily the EU, an emerging policy U-turn which was understandably absent from the SNP leader’s address; “Independence in the European Economic Area” doesn’t really work as a slogan.

And that was that. The First Minister wound up by referencing Winnie Ewing, victor of the Hamilton by-election half a century ago (“Stop the world, Scotland wants to get on”) and quoting the late Canon Kenyon Wright’s retort to the Iron Lady during the devolution debates of the late 1980s: “We say yes and we are the people.”

Delegates loved it, of course, but it didn’t exactly shake the foundations of the Aberdeen Exhibition and Conference Centre. But then we’re still in phony war territory, and perhaps the First Minister is keeping her oratorical powder dry for constitutional battles to come