I’m a homeowner. Been one for five years now. It’s brilliant. You should try it.

The fact I own my own flat might come as a surprise to regular readers of my articles, or my Twitter feed, or anyone who’s stood within 20 feet of me recently. That’s because, despite ostensibly being on the right side of the great property divide, I just won’t stop banging on about quite how badly my generation and those behind it have been shafted by Britain’s housing market.

Now obviously, I’m a kind-hearted, altruistic sort of a chap. The broken housing market is one of the biggest problems currently facing this country, deepening inequality, holding back the economy, costing the state a fortune in subsidies to buy to let landlords. Young people are being screwed, then old people tell them it’s all the fault of poor people and immigrants, and this makes me want to smash things. So I do what any sane and balanced person would do in this situation and spend my time on the internet shouting about land use restrictions.

But, I would be lying to myself (okay, I’d mostly be lying to you) if I didn’t admit that there is an element of selfishness at work here, too. Because despite the fact my wife and I own a London flat, ever higher property prices still don’t work in our favour. At some point, it is plausible, we will want more space, and, as life-long Londoners, we’d rather not have to move to Northamptonshire to get it. We would have a far greater chance of attaining the living standard we’re after if the bubble deflates a bit.

What the left can learn from Australian Labor

Will the Australian elections finally spark action on climate change? 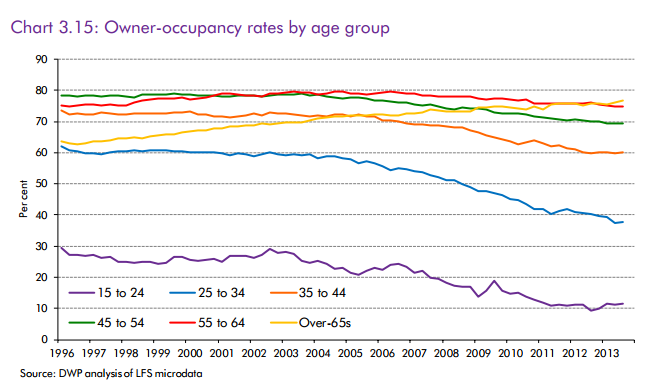 Owner occupancy rates have been falling steadily for over a decade. Source: OBR.

There is a tendency to imagine that, when it comes to our attitudes to property, the British people split nearly into two. If you own, you’re on one side of the divide, and stand to benefit from higher house prices; if you rent, you’re on the other, and would benefit from lower ones.

There is very obviously an element of truth to this: I’m not downplaying my privilege here. But nonetheless, the idea that anyone who owns their own home can only benefit from ever rising housing costs has a distinct whiff of Daily Express bullshit around it.

There are those who do stand to gain from spiralling property prices. Buy-to-let landlords; Londoners on the edge of retirement; anyone who is in the last house they will ever occupy.

But does expensive housing really benefit someone who owns a flat in, say, Luton, and is offered the job of a life time in Oxford? Or the couple with a baby on the way who can’t afford that second bedroom? Recent buyers would lose out from a plunge into negative equity, yes, which complicates things a bit; but unless they’re planning on staying in a broom cupboard for rest of their lives, even they will probably win out from a fall in the cost of housing in the long term.

I’m aware there’s a risk this is sounding like one long humblebrag, a way of showing that, even though I have a flat I still, like, really care. Maybe.

By 2020, there will be more households in rental accommodation than who own with a mortgage. Source: PricedOut.

But I’m still right, and you should still listen, because the tendency to mis-locate the fracture in our housing market has a real and damaging effect. The narrative in which all property owners stand to win from the status quo slips all too easily into an assumption that 60 per cent of the country’s households will win the jackpot from higher property prices.

That’s not only nonsense, it’s damaging nonsense. While we talk like that, politicians will quite naturally conclude that trying to make housing cheaper will be politically suicidal. If you ever wondered why George Osborne has pushed an economic plan calculated to keep house prices high, despite the fact that the collapse in ownership rates is a betrayal of everything his party is supposed to stand for, this is one very big reason why.

I own a flat. I still want cheaper housing. And in any sane world, most other people would, too. A ladder is meant to have more than one step.