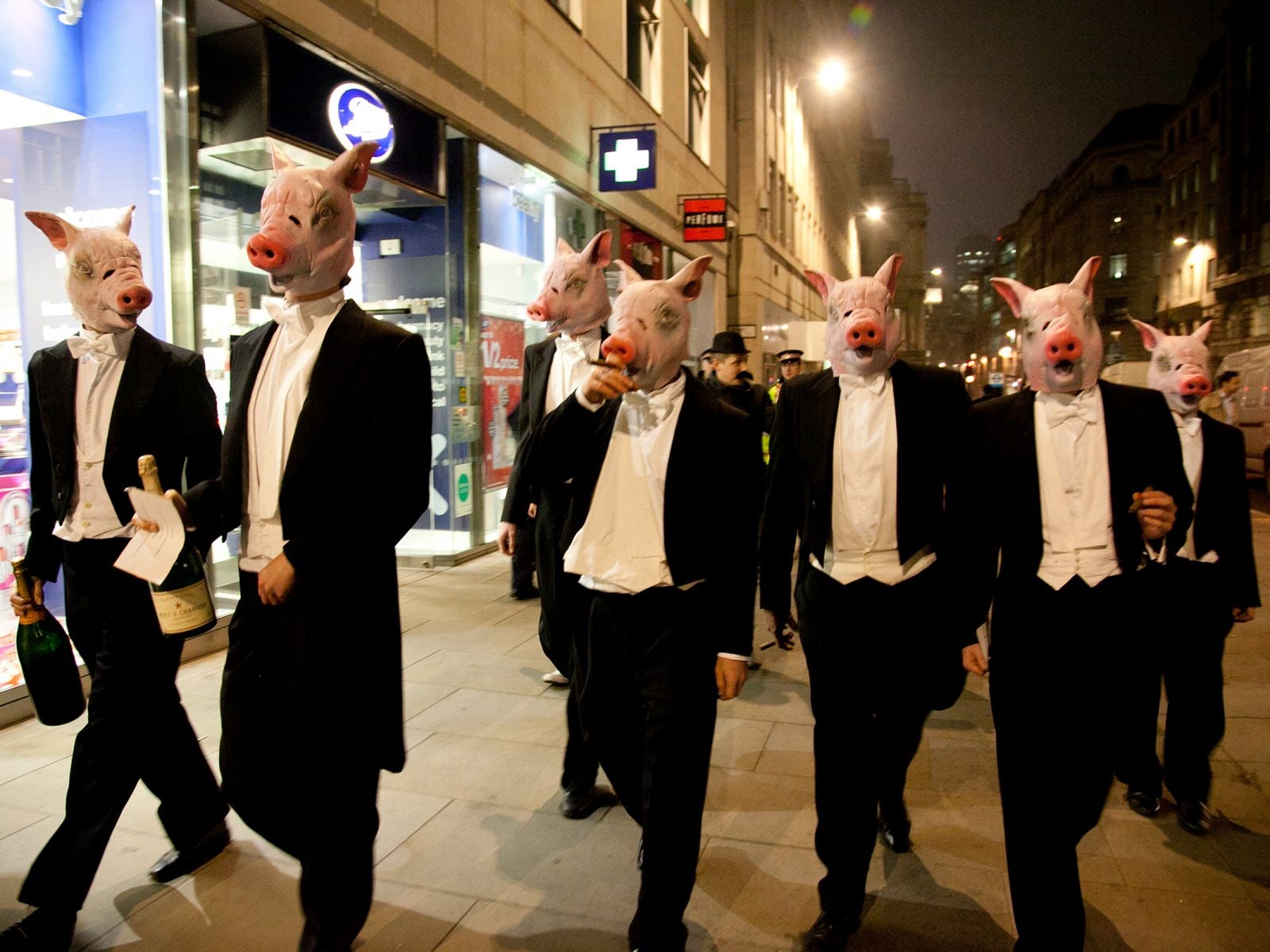 The titles of this book’s chapters tell us baldly that it is a story of decline and corruption: “Britain, Now” (listen to the effect of that comma) is a culture that has moved away from any effective commitments to honour, to intelligent collective memory, to ideals of public life and reasoned public debate. “Hedonism Trumps Honour”, “Charismatic Populism Smothers Democratic Debate”; this is our story, and it leaves us disturbingly at sea when we try to answer the question posed in the last chapter: “Who Do We Think We Are?”

It is not an unfamiliar story, and a groundswell of articulately angry books has raised comparable questions, from Will Hutton, Richard Hoggart and Nicholas Boyle in the Nineties to Michael Sandel and Robert and Edward Skidelsky in the past couple of years. Marquand, like all of these, insists that we have, in effect, lost the very idea of public morality; he argues that we are increasingly condemned to live in a world not only of self-interested individuals but of stupid self-interested individuals; and it is perhaps his acute awareness of this stupidity that makes him distinctive in this group of writers.

Deprived of most of the resources of intelligent scepticism, irony and perspective, even humility, which in a more functional culture would give us a bit of critical distance on our dreams – and on those who fall over each other in claiming to realise our dreams for us – we are at the mercy of those whose self-interest is served by exploiting our self-interest.

But, in turn, those cunning and resourceful enough to exploit our self-interest also have to be stupid enough not to be distracted from the profitable business of managing our interests by any larger considerations of long-term effects, whether social, environmental or whatever. As Marquand says, “free choice” has become “a self-validating mantra”, from which we can’t escape because we cannot act collectively in a purposeful way. The relation between producer and consumer, now the norm for every imaginable human interaction, locks us in to a devil’s pact of collective foolishness with no long-term outcome except disaster and universal impoverishment.

The paradox Marquand might have flagged up even more clearly is that we are an increasingly mistrustful society (for the pretty obvious reason that we lack robust social bonds and tangible commitments to the common good) and yet, at the same time, an increasingly credulous society, apparently vulnerable to being swayed by various forms of populist manipulation. Marquand is unsparing on the corrupting effect of leadership (whether putatively right or left, Thatcher or Blair) that seeks to appeal to a mass public while bypassing the mediating structures and networks that allow patient critique and scrutiny.

The “marketisation” of politics, signalled so eloquently in presidential-style televised debates and the hectic analysis of opinion polls, not only erodes our political health, it actually makes us worse people; and Marquand has no qualms about such fierce judgements of value. A properly open society – one in which there is pluralism, honest public debate, social mobility and controls on spiralling inequality – requires certain virtues: “fortitude, self-discipline, a willingness to make hard choices in the public interest and to accept responsibility for them”. We cannot survive without a moral image of ourselves as individuals. Such a moral image is the only thing that will allow us to be sceptical without being cynical, critical without being destructive – the only thing that will allow the possibility of genuine social trust and a shared social goal. Anyone who has read Fred Inglis’s admirable biography of Richard Hoggart, published last autumn, will recognise the apostolic succession here, the elegy for a political consciousness in which solidarity and irony could flourish together.

But Marquand goes further than Hoggart, further than the Keynesian/Orwellian land of lost content, in insisting that a new “public philosophy” must locate human beings in an environment of finite adaptability: we have to be taught that we are “tenants rather than freeholders of the earth”. The truth is that the mythology of the independent person, self-endowed with illimitable will and inalienable claims – the myth that dominates populist rhetoric, from advertising to electioneering – goes hand in hand with an attitude that sees the natural order as a bit of a menace to human “freedom”.

Putting us back into the natural order as a participant not a proprietor is an essential move in breaking away from what currently enslaves us. Hence Marquand’s interest in the resources of religious language: he is crystal-clear that we cannot write off religious traditions because they have some toxic manifestations; but this makes it all the more important to grasp what matters most in them, which is the way in which they affirm simultaneously a human dignity that is not dependent on status or productivity or political convenience and a human finitude that demands to be taken seriously. We are not our own creators; we are not magically protected from what happens to the material world we live in. We are more dependent than we might like to be. And far from this pushing us towards passivity, it intensifies the weight of taking responsibility for each other.

This is a good deal more than just a general appeal to “religious values” as part of our social capital (lots of goodwill to make volunteer organisations work, and so on).Marquand, who has no confessional axe to grind, has actually done some of the necessary reflection on religious doctrine that so many commentators find too taxing. Readers will doubtless disagree about whether these themes outweigh what they see as the less constructive elements in communities of faith. But at least there is the material here for informed argument.

It is interesting that he uses the word “honour” to encapsulate some of what has been lost. It’s a word that many will find uncomfortable; it has suffered from associations with patriarchy (the nightmare world of “honour killings”), with status obsession and the hypocrisies that go with it – with a world of artificial conventions, thin-skinned rivalries and murderous repressiveness. Yet Marquand boldly sets out to reclaim it as an essential aspect of reinstating public virtue, and his case deserves to be taken seriously.

Stripped of some of its cultural deformations, what is this about? Basically, “honour” is what makes it possible to look into your eyes in the mirror without shrinking too much. It does not have to be self-congratulatory; in its simplest form, it is just a matter of knowing what questions you need to be asking yourself for the sake of staying honest and consistent. It is being faithful to that “moral self-image”, which is emphatically not the image of yourself-as-moral (self-congratulation) but the image of what would make a morally coherent story out of your uneven and varied experience (honour can demand the clear expression of shame or remorse). Marquand would say, I think, that matters such as MPs’ expenses and bankers’ bonuses are troubling because they suggest a dishonourable mindset, a habit of avoiding difficult questions, dismissing the significance of being or feeling shamed, walking away from a moral challenge.

We don’t much like using the language of shame these days, because we are rightly sensitive to its horrible abuses, especially in the treatment of women; and increasingly, “naming and shaming” has become a way of trivialising and personalising issues and feeding an appetite for cynical gossip. Yet what has happened if we are never able to say of some behaviours that (even when they do relatively little damage) they are something to be ashamed of? Something that ought to mean that you are taken less seriously as a person to be relied on? Honour is to do with meeting our own gaze in the mirror, but it is also to do with meeting the gaze of others.

All this depends on the one obstinate theme at the centre of this book’s argument. Do we or don’t we believe that the public realm has an appropriate moral significance and solidity? Is it something for whose service people can be trained as a fulfilling, not to say “honourable”, professional career? If the fundamental deciding categories of your culture are rooted in financial transactions (if we are all producers and consumers), “public life” is an afterthought: you can sort it out with the skills and habits of other fields of activity, ideally commercial ones, so that the involvement of businesses with schools or hospitals will guarantee “efficient” outcomes, the greatest good for the greatest number at the lowest cost.

Marquand is not arguing for clinical separation between impure commerce and pure public service, a seductive model for the left, the voluntary sector and many more. The issue is whether public service and public good can be so completely translated into the language of market provision that nothing remains that cannot be rendered in business models, no goals without measurable profitable outcomes. If we believe in that non-translatable dimension, we have some theoretical work to do – in reframing concepts of honour, in insisting on an education that makes us familiar with where we have come from (not to reinforce a national myth but to remind us that we depend on the words and acts of others), in restating that we are part of a sensitive ecology of interdependent physical processes. We need an answer to the question of Marquand’s last chapter: what sort of life is human life?

Like Robert and Edward Skidelsky’s How Much Is Enough?, this book challenges us to think whether we have any coherent idea of a good or desirable life at all. In Isaiah Berlin’s terms, it seems that all we have left is negative liberty. Given Marquand’s severe convictions about our collective stupidity, that isn’t a very promising resource for the middle-term future.

The prospect is not unrelieved; Marquand notes the persistent energy in grass-roots politics, in co-operative movements and green activism. He might also take some comfort from noting that, despite his anxieties about stupidity, it is perfectly clear that what people read or consume in the populist media does not automatically shape how they act; scepticism survives, and Middle England is less Mail-clad in conviction than our politicians often assume (a significant test is the levels of generosity in response to aid or emergency appeals, international as well as local, even in times of “austerity”). Social media (rather a deafening absence, for a book about Britain now) presents problems, yet it can function extraordinarily effectively in assembling younger citizens around positive campaigns: I am writing this a few hours after speaking in south London with the gifted teenage organisers of a major electronic-forum discussion on youth crime.

There are aspects of Mammon’s Kingdom that some readers will regard as just a little rose-coloured – and the irritable dismissal of late-Sixties radicalism, especially R D Laing and Edmund Leach, is not entirely fair: there were oppressive family structures, violent domestic arrangements and corrupt habits to be challenged, even if some of the challenges ended up generating new and equally corrupting follies. But overall, Marquand has given us a crisp and serious essay to stand alongside all those others mentioned earlier.

That, though, is one of the disturbing issues we are left with. How many such essays does it take to shift the sluggish bulk of political muddle and evasion? “They have Moses and the prophets; let them listen to them,” as one authority observed; and if they will not listen to them, “they will not be convinced even if someone rises from the dead”. Essays, yes, by all means; but also the sheer practice of other kinds of life.

Rowan Williams is a lead book reviewer for the New Statesman. His new collection of poetry, “The Other Mountain”, will be published by Carcanet in September