Anyone who visits dating site OK Cupid today using Firefox as their browser will see this message: 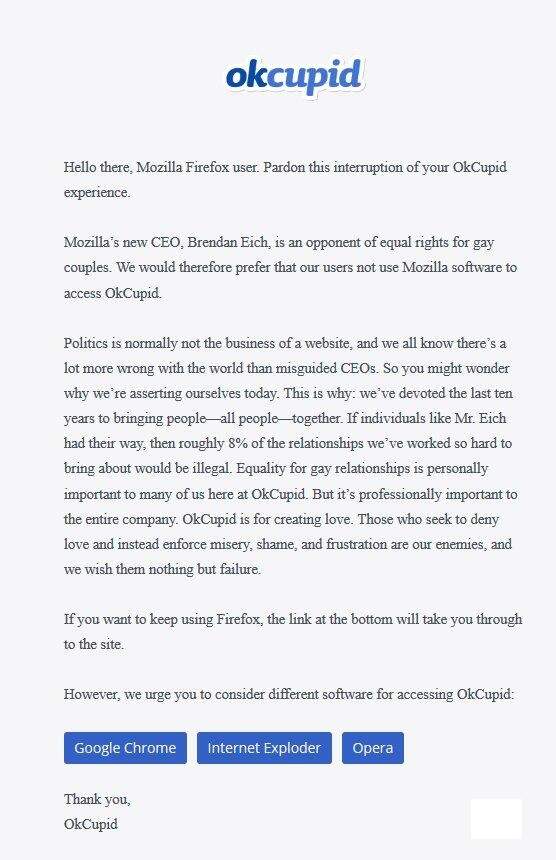 The Brendan Eich in question here has caused many people distress since being named as the Mozilla Corporations’s new CEO last week. Professionally, Eich made sense – he’s the inventor of Javascript, an extremely popular programming language that many modern websites and apps use. He helped start Mozilla in the 90s when it was part of Netscape, and was a part of the team that span it out into a separate entity (the Mozilla Foundation) in 2003 before becoming CTO of the Corporation in 2005. He is, to say the least, part of Mozilla’s furniture, and qualified in every way that makes sense, technology-wise, for the organisation’s new CEO.

Yet his appointment has caused three other board members – half of the total – to resign, and on 27 March there was a coordinated campaign by other Mozilla staffers to tweet that they wanted Eich to step down:

I’m an employee of @mozilla and I’m asking @brendaneich to step down as CEO.

I’m an employee of @mozilla and cannot reconcile having @BrendanEich as CEO with our org’s culture & mission. Brendan, please step down.

Have waited too long to say this. I’m an employee of @mozilla and I’m asking @brendaneich to step down as CEO. https://t.co/K3OqeImUnU

Have waited too long to say this. I’m an employee of @mozilla and I’m asking @brendaneich to step down as CEO.

The reason? He donated $1,000 to the campaign in favour of California Proposition 8 in 2008, which successfully banned same-sex marriages in the state. Eich has written about it on his personal blog since his appointment as CEO, saying:

I am deeply honored and humbled by the CEO role. I’m also grateful for the messages of support. At the same time, I know there are concerns about my commitment to fostering equality and welcome for LGBT individuals at Mozilla. I hope to lay those concerns to rest, first by making a set of commitments to you. More important, I want to lay them to rest by actions and results.

I know some will be skeptical about this, and that words alone will not change anything. I can only ask for your support to have the time to “show, not tell”; and in the meantime express my sorrow at having caused pain.

This non-apologetic apology hasn’t flown with many people, who find Eich too tainted for a role as important as the head of the Mozilla Corporation. While, for many, the Firefox browser might be their only recognisable contact with what Mozilla does, it’s an organisation explicitly dedicated to free and open software, and the openness and freedom of the web for its users, and its programs – from mail client Thunderbird to the recently-released Firefox OS for smartphones – offer an alternative to the profit-seeking, closed systems that Google, Apple or any other tech giant offers (and a note here: Eich is the CEO of the Mozilla Corporation, the private company entirely a subsidiary of the non-profit Mozilla Foundation, and the Corporation plugs all of its profits back into the overall Mozilla project). It’s an organisation with a kind of techno-missionary ideal, with staffers who truly believe in the emancipatory power of the web. In such an organisation, homophobia feels inherently contradictory.

Here’s a passionate blog from Hampton Catlin, one of the co-founders of Rarebit, a software company that has decided to boycott Mozilla’s products until Eich steps down:

Several months ago, my husband and I decided that we didn’t just like working together at the same company, but we wanted to go whole-hog and co-found a venture together. The first steps to achieve that were to update some of the applications that I had previously released. Being huge fans of WebOS and open source in general, plus we love focusing on emerging countries, the new Firefox Phone seemed a natural choice for us to focus our development on. We started to porting all of our apps to Firefox OS!

Today we were shocked to read that Brendan Eich has been appointed Mozilla CEO. As a gay couple who were unable to get married in California until recently, we morally cannot support a Foundation that would not only leave someone with hateful views in power, but will give them a promotion and put them in charge of the entire organization.

Many people are outraged in a political way, and Michael and I thank all of you for being so supportive. But, for us, this is very, verypersonal. Michael is a British citizen and so immigration is a big issue for us. Being a binational gay couple, up until this summer when the Supreme Court overturned Proposition 8, Michael was here on a temporary visa, tied to his job. Luckily, he loved working there, but we were not able to do anything on our own. If you leave your job, you lose your visa. So, due to Prop 8, Michael was unable to co-found a business with me.

By the very bones in our body, we cannot dare use our creativity, experience, knowledge, and passion to further the career of a man who has to this day not apologized for his support. I can’t spend hours and days and years polishing, building, and upgrading applications that make him richer than he is.

Those on Eich’s side have argued that boycotting Mozilla without also boycotting, say, the use of Javascript, is hypocritical, or that Eich’s political beliefs are not truly anathema to Mozilla’s manifesto. Erin Kissane, director of content for Mozilla’s OpenNews project and an openly queer employee, has defended Eich on the basis that, like the issue of climate change, aligning Mozilla with one particular political group could alienate too many people in the long run:

We can’t let that happen here: the open internet is not more important than gay rights or any number of other progressive causes, but it should and must be a broader movement. The moment we let “open internet” become synonymous with progressive causes – inside or outside Mozilla – its many conservative supporters will be forced into an impossible position.

And the open internet’s opponents – from companies who profit from web-as-walled-garden to governmental entities devoted to sucking private data from the internet like marrow from tender bones—would love nothing more than to be able to sideline this work as a misty-eyed liberal boondoggle or a creepy government-bloating plot to mess up the free (monopoly) market.

As a queer employee of Mozilla, I don’t actually feel particularly vulnerable, but I know many people in the wider community have been stung as well as intellectually offended by this choice. So my first duty is to them: to the people harmed. Neither Brendan nor our board have apologized for the ramifications of their actions, which is certainly their call. But I am sorry for the harm done. To everyone who has flinched away, and everyone re-traumatized by these events, I offer a complete and sincere apology: I have chosen to walk under this banner, and that makes me complicit, and I am so sorry for the pain I know this has caused.

In 2012, Eich faced a similar backlash from those appalled by his politics, but that eventually simmered down. If anything, the chorus of critics is growing louder, and the issue is becoming more difficult to ignore. If Eich’s divisiveness begins to undermine the success of Mozilla’s successes then it’s hard to see how he can justify remaining in his position.