The number of exoplanets known to humankind has nearly doubled, thanks to the Kepler space telescope. In an announcement this week, Nasa astronomers confirmed the discovery of 715 new exoplanets spread among 305 different solar systems – a vast haul that lends further weight to the view that planetary systems are the norm, not the exception, in our universe.

Two papers to be published in the Astrophysical Journal detail the findings, which were made using a neat statistical trick called “verification by multiplicity”, performed on data taken from the first two years of Kepler’s life, from May 2009 to March 2011. While scientists have found single-planet systems before, all of these are multi-planet systems – and that’s key to verification by multiplicity. Kepler observes 150,000 stars for signs of candidate planets – the dimming of the star’s light as a planet moves across its face – but if those candidates were distributed evenly among all of the stars you would expect to see most systems only having a single planet. That’s not what happens, though – instead, the candidate planets “bunch up”.

Using this, Nasa scientists could work out  – with a better than 99 percent confidence level – which planets among the candidates are actually there. It’s a method that heralds a potentially useful new technique for verifying exoplanet discoveries en masse. To put in perspective how big an announcement this is, quantity-wise, here’s a graph from Nasa showing discoveries of exoplanets over time: 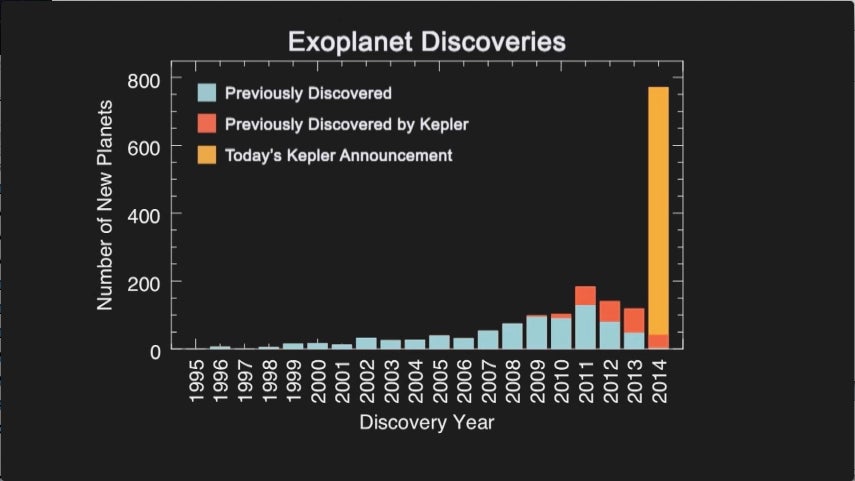 These new planets also share some general traits – 95 percent are smaller in diameter than Neptune, but only four are smaller than 2.5 times Earth. They mostly orbit extremely close to each other, and also in orbits that are close to their star relative to our own Solar System. Here’s Jason Rowe, research scientist at the SETI Institute:

From this study we learn planets in these multi-systems are small and their orbits are flat and circular — resembling pancakes — not your classical view of an atom. The more we explore the more we find familiar traces of ourselves amongst the stars that remind us of home.”

Kepler, which launched in 2009, suffered a mechanical failure in two of its flywheels used to control its aim in mid-2013. Yet, while it may have been stopped from collecting any more data, scientists – as seen with this announcement – still have a long way to go to analyse all of the information already collected. There are still more than 3,000 candidate planets which need to be evaluated, and a study published in October 2013 estimated that, extrapolating from Kepler’s findings to the entire Milky Way, 22 percent of Sun-like stars may have Earth-like planets orbiting in their habitable zones. That works out to about 17 billion planets, each theoretically capable of supporting life.