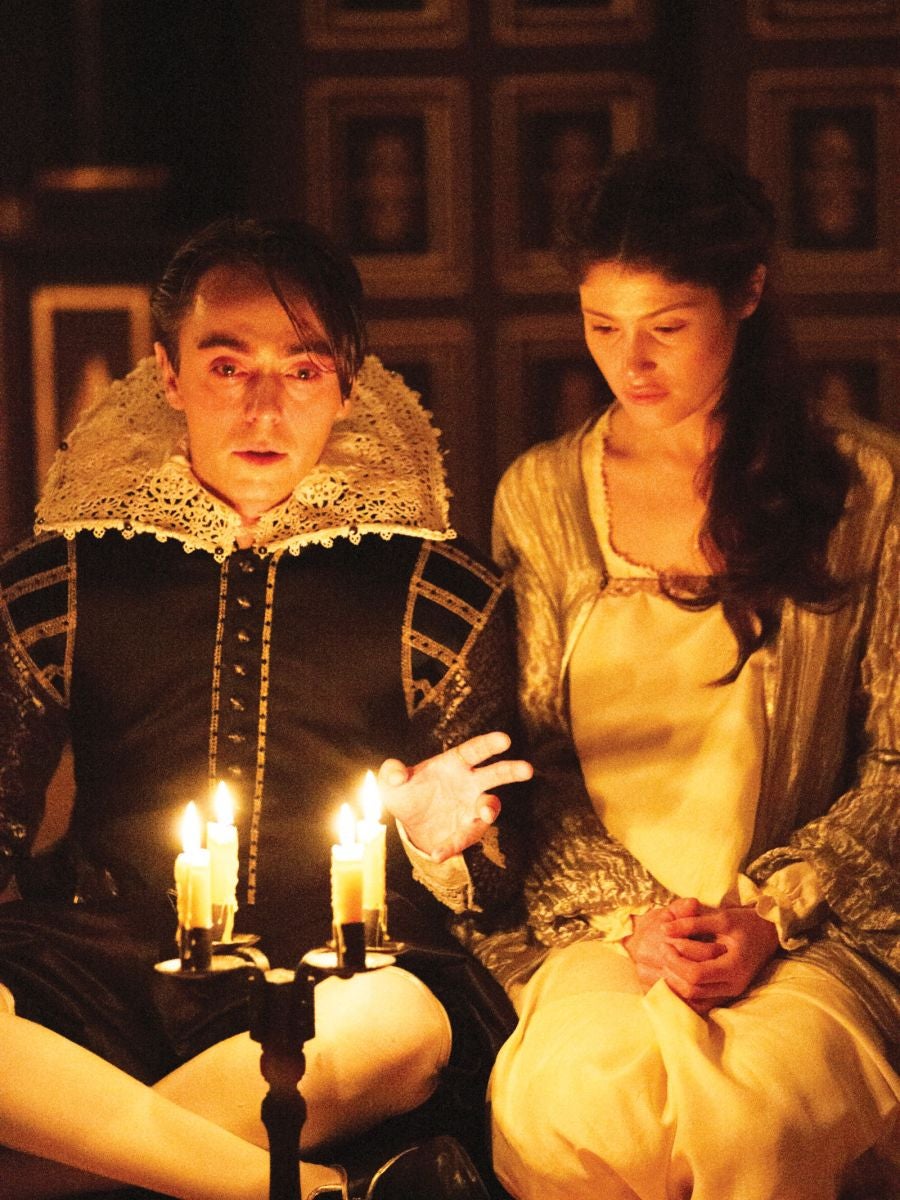 Adapting a novel, John le Carré once said, is like making a cow into an Oxo cube. The playwright Mike Poulton compares it to turning a Rolls-Royce into a light aircraft. Whichever you go for, the nagging worry as you sit down to watch the Royal Shakespeare Company’s new versions of Hilary Mantel’s Wolf Hall and Bring Up the Bodies is that they will fail to get off the ground – or simply taste of nothing.

It is no small triumph that neither is true of these plays. Poulton’s adaptations – a shade over six hours of theatre, in two instalments – are beautifully engineered and often enthralling as they play out the dizzying chess game of high-stakes Tudor politics. Abandoning Mantel’s backstories and elaborate time shifts, Wolf Hall takes us straight to Henry VIII’s problem: 20 years of marriage to Katherine of Aragon have not produced a male heir. Nathaniel Parker’s king, crashing around the court like a disgruntled toddler, has his gaze on Lydia Leonard’s alluring yet dangerous Lady Anne. The jumped-up Boleyns are imagining the trinkets and earldoms that will come their way. Cardinal Wolsey (Paul Jesson) is doing his best but is bustling towards his demise. “The one thing Henry can’t tolerate,” more than one character reflects, “is failure.”

The man tasked with finding success is Cromwell (Ben Miles), the Putney-born son of a blacksmith whose uncanny ability to get things done has lifted him from obscurity to the highest rungs of power. If Cromwell’s real-life achievements (fluency in multiple languages, service as a soldier across Europe and in the Florentine banks) seem awesome, Miles’s in the theatre are pretty impressive, too. Hardly ever offstage, he circles the court like a shark in dark satin, observing and waiting, laying out traps for his enemies and treats for his friends.

Plausible both as blokeish charmer and cold-blooded enforcer, he has a habit of watching the faces of his victims as he outmanoeuvres them – not sadistically, you feel, but simply to figure out how to do it more efficiently next time. It is like watching a Tudor supercomputer at work. Jeremy Herrin’s production is equally impressive and just as fast on its feet, particularly as the wheels begin turning on Anne’s fall from grace. His actors pedeconference furiously, West Wing-style, keeping the action flowing across the almost-bare stage of the Swan. In Christopher Oram’s design, Henry’s court is rendered with mercifully little hey-nonny-nonny: a wooden stool stands in for the seat of a river barge; a cart enters in Wolf Hall loaded with legal texts confirming Henry as defender of the faith and reappears in Bring Up the Bodies as a tumbril bearing the corpses of Anne’s supposed lovers. Nothing seems extraneous. Everything has its place.

So what’s wrong? Perhaps that everything has its place. Whereas the joy of the books is the panoptic curiosity of their vision – their eye for shimmering detail – Poulton’s adaptations are so full of plot and counterplot that there’s barely room for anything else. Only in fleeting moments (the hunting scene that opens Bring Up the Bodies; Henry’s ritualistic signing of death warrants) do the plays find visual poetry to match the piercing clarity of Mantel’s prose. It’s possible to watch and be riveted – as I was – without being in the least bit moved. It’s hard to imagine an adaptation being better done but some cows can’t be boiled down.

Mantel’s intriguing politician seems almost wholesome when set alongside the festering Italian court of John Webster’s The Duchess of Malfi, in which one false move is liable to get you a dagger in the ribs, or a poisoned prayer book applied to the lips. It’s the opening production at Shakespeare’s Globe’s new indoor theatre, the Sam Wanamaker Playhouse, modelled on the kind of space Shakespeare and his peers began to use in the first decade of the 17th century. It is a jewel of a thing: tiny (just 340 seats), exquisitely carpentered from pale English oak and Scots pine and illuminated largely by glistening, golden candlelight.

Full of plot twists and featuring a blood-spattered finale that would shame Quentin Tarantino, Webster’s tragedy can seem schlocky and overcooked. The Old Vic’s 2012 production showed Eve Best’s duchess being strangled with horrific realism, leaving her writhing onstage for the best part of a minute; other directors have emphasised Malfi’s nastiness or the kinky, psychosexual games that flicker across its surface. Little wonder Victorian moralists loathed it; even less surprising that it is one of our own era’s most-revived Jacobean nasties.

Gemma Arterton brings an appealing freshness to the role, quick with mocking laughter, then patient and dignified as her suffering mounts. Yet the evening belongs to her siblings, the double act of David Dawson’s Ferdinand and James Garnon’s cardinal. Garnon glides around in his scarlet robes with a carnivorous leer; Dawson has the ferret-like appearance of a young Mandelson, eyes seething with suspicion even before his sanity begins to wobble.

It is the look of the production that lodges in the mind. Candelabras hung above the stage are levered up and down to modify the overall light levels and you quickly adjust to the world of difference that a single candle can make. Characters brush past each other in the gloom, whispering confidences or preparing to kill each other; russet and silver fabrics glow and sparkle for a moment and just as quickly fade.

When a troupe of madmen is brought out of the darkness of a lunatic asylum to dance for the duchess, the moment has a strange, sad beauty. It manages something that the RSC never quite gets: it catches the breath.

(Top) Dying of the light: Ferdinand (Dawson) and the duchess (Arterton) in The Duchess of Malfi. Photograph: Mark Douet.