Via Joe Weisenthal at Business Insider, this video of Julia Gillard attacking her opposite number, Tony Abbott, for his repeated misogynistic comments is worth watching. If for no other reason than the serious schadenfreude of seeing him shrink into his chair. Gillard does rather bury the lede, though – her first few attacks fall a bit flat, but keep watching til around 3:30 and she really starts to get serious:

The background to the video is the opportunistic motion Abbott’s party put before the House of Commons attacking the Speaker of the House for sending lewd text messages, which it called “misogynistic and sexist”. As Gillard makes abundantly clear, those in glass houses should not throw stones. 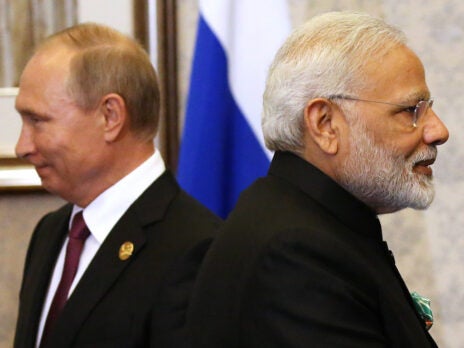 What does India really think of Russia? With Raji Rajagopalan

I was offended too by the sexism, by the misogyny, of the leader of the opposition catcalling across this table, at me as I sit here as Prime Minister, “if the Prime Minister wants to, politically speaking, make an honest woman of herself”. Something that would never have been said to any man sitting in this chair.

I was offended when the leader of the opposition went outside in the front of Parliament and stood in front of a sign that said “ditch the witch”.

I was offended when the leader of the opposition stood next to a sign that described me as a man’s “bitch”.

I was offended by those things. Misogyny. Sexism. Every day from the leader of the opposition.