Bret Easton Ellis is telling me how to write a sex scene. He doesn’t understand why novelists are so scared of them. Just keep it cold, keep it clinical. Hotness can only be achieved by “sparingly written, stripped down” prose. Ornate euphemisms are the writer’s enemy. “She doesn’t need to have a ‘love purse’…” sighs Ellis. “He doesn’t have to unsheathe his ‘giant purple sword’ and put it into her ‘love purse’…”

Ellis’s new novel The Shards was described this week by a usually prudish American newspaper as “his sexiest ever”. Few Ellis books are complete without ice-bound descriptions of sex, drug-taking, parties, murders, Los Angeles and music. Each is present in The Shards, which follows an unreliable narrator called “Bret Easton Ellis” through his final year of high school in 1981. Ellis, an aspiring writer, soon becomes fascinated by a serial killer called the Trawler. People disappear without explanation. And then the Trawler starts stalking Ellis’s friends.

Ellis, America’s foremost literary pessimist, hasn’t written a novel for thirteen years. He spent much of the last decade trying to crack Hollywood, or “the casino” as he calls it. Four years ago it all blew up in his face. (Ellis does not say how.)

He wrote his first novel, about a boy who wakes up as a pancake, when he was ten. It was not published. Unperturbed, the prodigy announced himself with the best-seller Less Than Zero (1985), a short, bleak novel about glazed, monied Los Angeles teens who take too much cocaine. Ellis was 21, still at Bennington College in Vermont, when he was anointed the voice of a generation. He has never shaken the burden that comes with that moniker, even as classmates from the same college – Jonathan Lethem and Donna Tartt – became successful novelists too. Less Than Zero took Ellis eight weeks to finish. He has been living with its consequences for over 40 years.

Ellis’s morbid reputation was confirmed by American Psycho (1991). A bloody, deadpan satire of Wall Street excess, it was so shocking, so teeming with chainsaws, necrophilia, rape, cannibalism and mutilation that Norman Mailer – a man who once stabbed his own wife – called for it to be examined, pre-publication, by a “panel of respected novelists”. That learned panel never sat around a table. The British novelist Sebastian Faulks said American Psycho was the “nastiest bit of writing I have ever encountered”. It sold over a million copies, and was adapted into a meme-generating cult movie starring Christian Bale.

Patrick Bateman, American Psycho’s protagonist, may be the only character from a novel published in the last 30 years to become a Halloween costume. Today the book is still sold in the world’s more fretful regions inside opaque sleeves, which Ellis has described as “cute”. From the novel’s publication he was damned – the nasty literary bad boy.

The Shards is not bullshit. It’s a sustained act of remembrance, set in the deep past of Ellis’s youth, what Anthony Powell might have dreamed up if he and his friends had been born in California in the Sixties, and not Edwardian England. It radiates regret; for all The Shards’s slipperiness, it seems authentic and sorrowful.

It all came as a surprise to Ellis. “A book can be hiding for a long time,” he says. The idea behind The Shards, that writers and serial killers behave in oddly similar ways, had been bothering him since he was 18. He began writing something when he was 22, and once more at 27. Nothing stuck. Finally, when Covid lockdown happened, a way of translating that idea into a novel “dropped into my lap”.

In person I expected Ellis to be duplicitous. He appears over video call, looking older than his voice sounds on the phone, hair white against the blank grey backdrop of his office wall in Los Angeles. There are passages in most of his novels that could surely have been written only by a truly dangerous maniac but this sense of threat overlaps with his self-mythologising. Even friends such as the novelist Jay McInerney have called him a “chronic liar” in print. For all its sincerity, Ellis describes The Shards as a “trickster book”. He says he is drawn to “hidden narrators”: unreliable mask-wearers who the author must teasingly unravel for the reader. Why are they hiding what they’re hiding? And what, each book suggests, is Ellis hiding?

I’m about to try and dredge some secrets out of him when our conversation is interrupted. Ellis bursts into an extraordinary, character-breaking laugh. He has received a text from Liz, his interior designer. “I told her that I couldn’t afford these cabinets,” he says, giggling. “They were too expensive. I can’t do it Liz, I said, Liz, I can’t do it.”

The cabinet maker just returned with a much lower offer. The prized cabinets are within his reach at last, but Ellis says he feels terrible. “That’s his work, you know?”

Aren’t you supposed to be the prince of darkness, I suggest. How can you feel guilty over paying less for some cabinets? You have slaughtered countless innocents in your novels. You have described human nature as “inherently evil”. Take the offer. “I feel guilty! I feel guilty about it!” Ellis is speaking in a silly falsetto. He swivels around and around in his chair, laughing. I’m laughing too. He bites his lip. “Finally, I have a bit of extra income so we can afford the cabinets…”

[See also: Kick the Latch is a spare and powerful account of a life with horses]

We have left the coldly detached, surgically pristine atmosphere of Ellis’s art. “This is the glamorous life. This is the life of the literary bad boy,” he says, launching into an affectionate description of the new shower heads he bought for his bathroom, and how expensive groceries have become in his West Hollywood neighbourhood.

The notorious writer who wandered through the party scenes of the Eighties, Nineties and Noughties with a bleeding nose from all that cocaine has become a man whose heart beats fastest to news from his interior designer. In The Shards his fictional alter-ego describes himself as “a man who stayed a child”. In real life Ellis is a man who describes long evenings spent watching chefs “silently cutting steak up for a nice tartare” on the Food Network. Not a perpetual child, not a hellraiser, but a domesticated middle-aged bloke, living with Todd Michael Schultz, his long-term partner, peacefully habituated to life’s minor sadnesses.

He doesn’t sound like he goes out much any more. He sounds like a recluse. One of his hobbies is checking the Goodreads page for The Shards and figuring out precisely when the reviewers stopped reading it. “I’m just keeping it real in my own solitary life as I age into decrepitude.”

Ellis thinks this is a moment of political withdrawal. The ideological tides of the 2010s are going out. “Wokeness is running out of room, like everything. Everything runs out of room.” Ellis used to participate in those conflicts. A few years ago he released White, an extended memoir-jeremiad against “likeability culture”, which made its author seem very unlikeable indeed. (In retrospect it was, perhaps, a bit much to describe a female dining companion as going “spastic” when he disagreed with her about Black Lives Matter.) For someone so equivocal – Ellis begins half his spoken sentences with “I don’t know” – fighting the culture wars was always likely to end badly. There is no room for nuance on those battlefields.

Anyway, he is done with the outbursts. The main point Ellis made back then – that the media’s “hysterical” obsession with Donald Trump achieved nothing – has held up pretty well, even if he expressed it crudely. He points to Schultz’s position on trans rights as evidence that Americans are tired of political squabbling. Previously “obsessed” with gender issues, his partner has grown sceptical of the entire debate. It took gays decades to be accepted in America. Ellis believes that “people don’t like to be forced into accepting anything. It takes a long time.” He would rather watch his cooking shows than CNN. “I’m tired of it,” he says. “I’ve moved away from that conversation.”

Away, and through The Shards, back into himself. The words “I remember” appear countless times in the book. Remembering, for Ellis, is a narcotic. Out with the cocaine, in with an auto-fictional excavation of his past. Approaching his sixtieth birthday, he cannot stop remembering things now.

Growing up in Sherman Oaks in the San Fernando Valley, a canyon away from where the Manson murders happened, Ellis had a dog called Shingy. The dog, a lhasa apso mutt mix, was very old and suffered from depression. Shingy tried to end it all in the family’s pool. “It simply sank to the bottom, not wanting to live anymore… someone screamed – my sister screamed – Shingy’s at the bottom of the pool!”

Ellis acts the scene out, the plummeting dog, the howls of his sister, then his own frenzied fully-clothed dive into the water. Shingy, blind and wet, loped back to the kitchen “by scent and found his pillow and lied down”.

Who the hell is this sweet, warm old man and what has he done with Bret Easton Ellis? The chasm between his print voice and the pet-saving teenager bewilders me. It worries me. I cannot tell if he is being serious, or playing another one of his games. Where is the bleak satirist? The bastard? I fear we have gone too far off brand, so I throw him a soft ball.

“Yes,” says Ellis. His tone is venomous, as if it’s the stupidest question, with the most obvious answer, he’s ever been asked. I do not quite believe he thinks that, but I let him have it. For Bret Easton Ellis to write he needs to believe, as Evelyn Waugh did, that everything is worse than it actually is. He needs to look at the world and see sadness and struggle everywhere. The Shards is his latest, most gorgeous exploration of that lie.

[See also: Will the Sunday Times turn on “wokery”?] 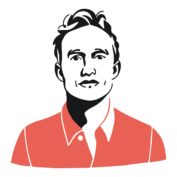 @Will___lloyd
Will Lloyd is commissioning editor and writer at the New Statesman.