Craig Ranson’s career, spanning several different sports and countries, has produced some complex loyalties. The Western Australia native has not had his accent watered down, but after 15 years cumulatively as a physiotherapist with the England cricket, Wales rugby, and UK athletics teams, he admits to developing a few soft spots. “I’m still an England cricket supporter,” he says, laughing. “Although there’s very few players left from my time… Jimmy Anderson, Stuart Broad… It may swing back the other way at some stage!”

Since January 2017, Ranson has been the director of athlete health for the English Institute of Sport (EIS), a grant-funded organisation that provides sport science and medical support to elite athletes, many of whom go on to compete in the Olympic and Paralympic Games. “Our job is to look at what are the biggest issues affecting athlete health, both in terms of their well-being, [and] also their availability for preparation and performance,” he explains. As well as injury mitigation, management and treatment, Ranson is concerned with cultivating the right environment to “allow someone to be in the best frame of mind to complete their training to the best of their ability”.

Alongside designing detailed strategies around respiratory health, which is particularly fitting within the context of the ongoing coronavirus pandemic, the EIS is currently working on an extensive programme for athletes’ mental well-being. This includes encouraging more athletes to talk openly about their stresses and anxieties, lifestyle guidance, and investment in specialist performance psychologist staff.

Ranson suggests that a greater awareness of mental health should also translate to an evolved, more flexible approach to coaching. Does that mean an end to the “hairdryer” treatment? Ranson doesn’t necessarily think a sweeping “softer” approach is required, but simply one that changes based on the individual athlete.

Read more: Why people are struggling to access therapy

“The really successful coaches, and you’ll hear this from any coach, [have] the ability to man-manage… ‘Person-manage’ is probably the better term. But [it is the ability] to recognise what each individual needs to perform.” For some athletes that might be a “bit of a dressing down”, but for others, Ranson says, “it might mean they need lots of positive feedback”.

The uncertainty created by Covid-19 has been very challenging, Ranson adds. Where previously the sporting calendar might have offered consistency and constancy – something to plan weekends and summers around – the pandemic has made a mockery out of routine, while forcing athletes and spectators to quickly adapt to a strange new reality.

At the time of writing, the Olympic and Paralympic Games are set to go ahead in Tokyo this summer, a year after they were originally scheduled, with restrictions on travel, crowd size, and socialising. Ranson confirms that the EIS is working closely with the British Olympic Association and the British Paralympic Association to help athletes cope with the prospect of a very different experience. 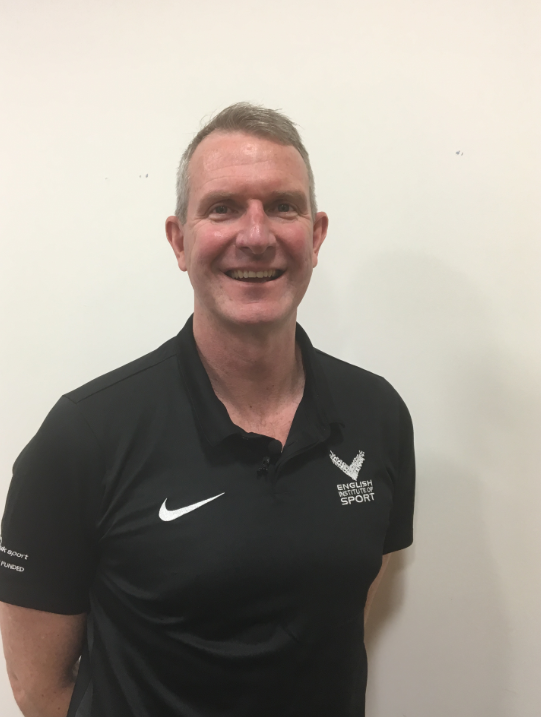 Craig Ranson has been with the EIS since 2017.

Ranson is, obviously, a huge fan of sport, who sees the merit in its continuation throughout the pandemic, as a morale-boosting distraction for the public and to sustain the careers of those directly involved in it. But what would he say to people who think that large sporting events represent too big a risk too soon, especially while vaccine programmes around the world are still in progress?

“My simplistic view of these things, and it’s not just about the pandemic, it’s about risk in general in life, is that there’s always risk in everything,” he says. “There’s a risk of travelling full stop. And the risk management has to be proportionate. It’s for people above my pay grade to decide how proportionate that is, whether it’s a Games with no crowds, a Games with crowds, or no Games.”

Ranson is wary of life being disrupted perennially because of “perceived risk”. He doesn’t trivialise the need to be careful, but is confident that organisers of large sporting events are profoundly aware of this fact.

On mental health, Ranson adds that putting an end to stigma should be the key aim. “It’s really difficult to speak out if you think you’re going to go into the abyss,” he says, “but, actually, if you know there’s a support network that you can avail yourself of, that makes a difference.”

Ranson says senior figures, be they high-profile sports stars or chief executives of sporting organisations, have an opportunity to lead by example. “It’s not [ideal] to have the psychologist or the doctor roll out [mental health] programmes. It’s [got] to come from the performance director or the CEO of the organisation, to come out and say this is really important for the whole organisation, and to roll it out from the top down.”

As for athletes coping with stress and anxiety in general, Ranson says sport performance psychology has some go-to tools that can help. “Control the controllables” is one. In a sporting environment, there are many things that can go wrong, but it is best not to focus on those, he explains. “You can control the process, and you can prepare as well as you can. The outcome is a little bit down to fate.”

Sportspeople are used to scrutiny from spectators. On the terraces, emotions run high, and cheers and boos are commonplace. But what happens when that scrutiny, that judgment, is amplified and takes up a new space, outside of the isolated context of a match or specific event?

The relationship between social media and sport is complicated. On one level, it is a chance for greater engagement between fans and their favourite athletes. On another, it has become the backdrop for sustained criticism, or even abuse. “I suppose it’s probably the visibility of it [abuse],” Ranson says. “It probably always happened, but it was in the pub between two or three people, or in the front room; here, these criticisms and these opinions were aired, appropriate or not. But now it can be visible to the whole world.”

Ranson refuses to be prescriptive about what the likes of Twitter or Instagram should do to protect sportspeople online; but, again, drawing on controlling the controllables, he talks about what sportspeople can do to manage their own risk. “There are ways and means of applying filters yourself. You know, you can limit what you can see on your social media. You can exclude certain words.” It doesn’t make the abuse acceptable, he clarifies, but his interest is in empowering the athletes affected. “There are things that athletes may not realise they can do to help themselves,” he says.

Parity of esteem has been a watchword for health policy in the UK for a long time, but Ranson feels there is still progress left to be made on putting mental health on the same level as physical health. They are “intertwined”, he points out. “If you’re thinking about someone who’s injured, and they’ve sprained their ankle… If you only focus on treating their ankle and don’t treat the whole person, psychologically as well as physically, then their recovery is likely to be A) slower and B) less robust.” And with his “previous hat on, being a physiotherapist”, Ranson notes that exercise is “probably the most powerful remedy we have for disease”.