Last month marked 50 years since the Equal Pay Act came into law, giving men and women in Britain the right to equal pay for the same work. It was a campaign fought hardly by machinists of Dagenham’s Ford Factory. But 50 years on, the fight for women’s economic justice continues and the coronavirus crisis is only set to exacerbate inequalities.

Anyone looking at hospitals, care homes and their own families over the last few months will know that women have been essential to the country’s response to the pandemic. But the lack of recognition for what women do at home and in the workplace risks women being overlooked and left behind.

Young women were already struggling before this crisis began. Research by the Young Women’s Trust last year found that one in four young mothers were skipping meals to provide for their children and a third of young women were struggling to make ends meet.

The economic fallout from Covid-19 will leave many struggling financially, with young women among those worst affected. In our own survey published last week, young women told us that coronavirus is pushing them into further financial hardship. A fifth of respondents, meanwhile, reported losing work since the crisis began and a quarter of them said they expected to lose more than £100 a week. 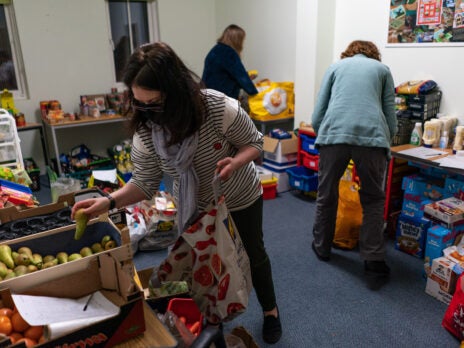 Young women are facing tough choices in order to make ends meet. A young woman we work with, Anna*, who is from Manchester, told Refinery29 recently: “Not only am I buying less shopping but it’s more expensive. I used to eat two meals a day and now I’m only eating one, while also sacrificing my sanitary products.” This is a common story among the women we speak to, with many telling us that travel restrictions have prevented them from travelling to the cheaper supermarkets they can afford on universal credit.

Research from the Resolution Foundation in April showed women were a third more likely to be working in sectors shut down by Covid-19, such as hospitality and retail. And according to PWC, nearly 80 per cent of those who have lost their jobs since the crisis began are women and two-thirds of these are aged 18-34. Tina* told us recently: “I’m at risk of redundancy as I work in the Travel Industry, my employer has refused the government lifeline of the retention scheme and it’s difficult to understand why.” The government must act to safeguard jobs, ensure the benefits system can provide security for young women, and increase support so that those losing their job can find another.

Women are also doing more hours of unpaid work at home, whether it’s caring for children or parents, or volunteering in their local community. This is on top of the fact that women in employment are twice as likely to be key workers as employed men. It’s estimated that young women’s unpaid work before the pandemic contributed £140bn a year to the UK economy. One young woman told us: “I have a terminally ill nan I care for. Both of my parents are disabled and I care for them also. I worry about how I can look after all of us financially”.

A survey by the Young Women’s Trust last year also found that 57 percent of women aged 18-30 were unable to take up employment because of a lack of suitable childcare options. Many employers do not encourage flexible working, shutting women out of jobs, sectors and promotions before they have even begun.

Uncertainties post-Covid 19 risk this getting worse. Just last week, research from the Institute for Fiscal Studies showed that working mothers have borne the brunt of the lockdown, working fewer hours than employed fathers to care for children. Childcare must be treated as a fundamental part of the country’s infrastructure if the UK is to achieve true equality between men and women in the workplace. The role women play in caring for children or others needs to be recognised and financial support increased for carers.Furthermore, gender pay gap reporting has been suspended during the pandemic. There is a real danger that equality in the workplace will take a significant step backwards without the government and employers stepping up.

We also know that the crisis has had a greater impact on specific minority groups including disabled young women and young women of colour. There have also been marked increases in domestic abuse and other forms of violence towards women. Services that were already struggling to meet demand before the crisis have been buckling under the strain. The government should urgently prioritise these services.

Despite being among those hardest hit by the crisis young women are largely ignored in the government response and their voices are, as ever, are missing from the public debate. A better understanding of their experiences is needed through engaging with young women directly and through the organisations that support them.

*Names have been changed.

Georgina Laming is movement builder at the Young Women’s Trust. Young Women’s Trust has set up an emergency fund to help economically vulnerable young women pay for food, bills and other essential items during the coronavirus crisis. You can find out more and donate here.