When Carmen* was a child, she thought her upbringing was ordinary. Her “highly religious” parents looked just like the other Latinx families she grew up with around her church.

“While not all churches are made equal and neither are different families of the same culture, there are cultural tendencies and religious beliefs that contribute to a highly authoritarian environment,” she tells me. “Reputation and presenting oneself as pious and holy was of the utmost importance.” She adds that non-conformist behaviour was punished in young children and that any independent thinking was verbally brutalised and quashed. “[My parents] would resort to abusive behaviour as a form of control and see open conversation as an act that leads to too much questioning and eventual corruption.”

As Carmen got older, she gained greater access to the internet. She started using the social network Reddit and came across a forum that made her view her childhood through a new lens. Over time, she began to realise that what had happened to her wasn’t healthy, but that there were others out there – her situation was not unique.

“Being able to hear others’ stories just confirmed my suspicions and brought me comfort,” she says. “I realised I was not obligated to tolerate abuse.”

Carmen is one of millions of users who has found Reddit a haven for processing parental abuse. Subreddits such as r/insaneparents, r/raisedbynarcissists, and r/narcissisticparents are just a few of the growing number of forums where communities of traumatised children are gathering to swap stories, seek advice and gain resources to help them create boundaries with their parents or even learn how to cut ties. There are now dozens of subreddits dedicated to helping people in these situations and they have begun to flourish after existing for close to a decade. And while they largely serve as support groups, some have issues –from fake posts to abusive messages – that make some subreddits an occasional hotbed of hurtful comments rather than a place of solace.

The oldest of these forums is r/raisedbynarcissists, which was founded in February 2013. It currently has 618,000 members and describes itself as a support group, and is arguably the most useful group for those emotionally recovering from or living with a parent deemed to be a narcissist. The group is dominated by users venting and posts asking questions that are more often than not seeking validation. Although it is not the largest of this genre of subreddit, it still receives hundreds of posts a day. There are detailed rules and active moderation to keep harmful comments off posts, and the sidebar contains a number of resources such as suicide helplines and explainers about how to identify narcissism.

Posts on r/raisedbynarcissists are often statements rather than arguments or questions. “Raise your hand if you learned to bottle up all emotional trauma and mental health issues, because talking about them as a kid was met with ‘Stop feeling sorry for yourself/Your stress is stressing me out/I had it much worse than you’” was the title of one popular post this week, which received more than 800 upvotes. Others will share achievements, such as “I finally blocked my n[arcissist]dad on all platforms!” with comments wishing the user good luck in their new chapter and congratulating them on overcoming their fear. 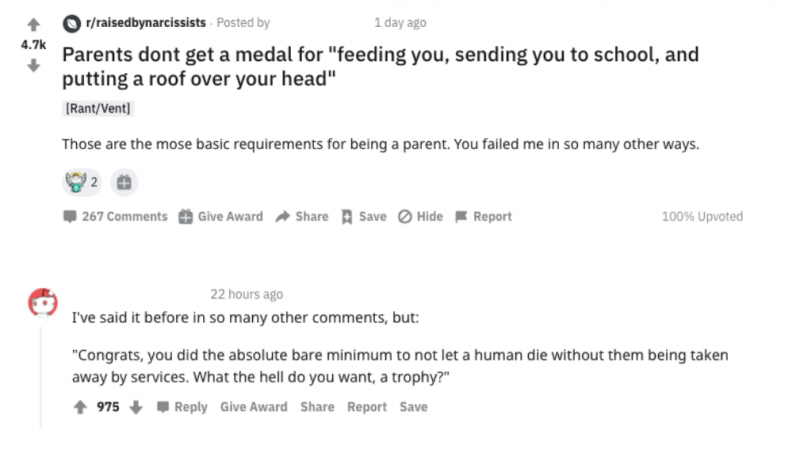 While many of these subreddits look similar to the posts on r/raisedbynarcissists, other forums are slightly less focused on support. r/insaneparents is one of these, and is also the most popular of all the bad parenting subreddits, with over a million members. Although it states in its description that it can be used as a place to seek comfort, its moderators tell me that it was originally built to “show how pseudoscience, disinformation, conspiracy theories and social media affects kids today”.

“Some aspects of that are still here,” they tell me, discussing how the subreddit has morphed. “Disinformation and conspiracy theories are common among the things we see parents attempting to push on to their children.” Today, most popular posts on r/insaneparents tend to be screenshots of text exchanges between children and their parents in which users can vote underneath whether the exchange is “insane”, “not insane” or “fake”. The final problem reflects a growing trend on subreddits similar to these toxic parents boards: fake posts. Places such as r/relationships (where people tell stories about all kinds of interpersonal relationships and ask for advice) and r/AITA (where people tell stories that ask the question: “am I the asshole in this situation?”) are plagued with accusations and admissions that content is made up. In some cases, people treat them like their own personal fiction writing class where they try to make realistic-sounding, intriguing stories.

“We tend not to filter a lot of posts ourselves,” the r/insaneparents moderators say. “We try to let the community self-police; they are the ones with these experiences. They know what belongs here and what doesn’t. Usually, the only times we step in are in instances of bigotry, bullying, or someone attempting to lie to our community.”

The r/insaneparents “insane or not” bot

“We get our fair share of trolls and people who are attracted to the group for the wrong reasons,” says Carmen, now a moderator of one of these subreddits (she asked for her specific subreddit to be unnamed). “[But] I’d say most people are supportive and empathetic just because they relate to the posts in such a specific way. [They] are very much allowed to vent and express their anger in our group towards their abusers, we do just try to make sure that anger isn’t redirected at other users or leads to generalisations on groups of people.”

Dan* is a moderator of another such subreddit, and also asked for his name and subreddit to be made anonymous. He has moderated his subreddit for the last three years after becoming an active member several years before. He agrees that moderating can be a minefield.

“We work pretty hard to remove posts and comments that break the rules of the subreddit, and we always leave feedback so that people understand why something was taken down by us. The subreddit wouldn’t be the safe, compassionate haven that it is if we didn’t have stringent rules which we enforce. The community itself is great, but the forum is anonymous and open to anyone, so we do get some unsavoury, hurtful remarks too… invalidating comments can be really damaging.”

While subreddits such as r/insaneparents, r/narcissisticparents and r/raisedbynarcissists are all dedicated to discussion about abusive parent-child relationships, they have inspired offshoots and full networks of adjacent support groups. On r/raisedbynarcissists in particular, there is an entire sidebar with a list of more than 20 related subreddits, ranging from more specific issues (such as r/RBNLegalAdvice) to more social, tangential topics (such as r/RBNMovieNight and r/RBNBookClub). r/NoMIL and r/NoDIL are largely humorous groups that try to joke about challenging in-laws, but also delve into the more seriously unhealthy side of how these relationships can manifest.

Ultimately, these groups aim to become a haven for the children of abusive parents. “Healing from parental abuse is a highly individual, non-linear path,” Dan says. “Each person moves along at their own pace. When your very personhood has been systematically denied and undermined, it’s really important to be allowed to lay claim to that path with full autonomy, and define for yourself what is right at any given part of it.”

Despite occasional problems, these moderators have found their subreddits provide a level of validation they wouldn’t find easily elsewhere. “Validation is really important when you’ve been led to believe all sorts of distorted things about yourself and the world,” Dan tells me. “I could go on at length because this subreddit changed my life, for the better.”

*Names have been changed at the request of the subjects.