Grace Beverley is not a fitness influencer. And by her metrics, she’s correct. “If you come to my page expecting fitness content and workouts, then you will be very disappointed,” she says. And despite a million followers on Instagram, her page is surprisingly bereft of stereotypical captions or sponcon (sponsored content). “Successful people and CEOs, they often don’t look like me. I mean, you’re an old, white man in a suit or you’re not successful. You’re not an entrepreneur.”

When I speak to Beverley early on a Wednesday morning via video call, she proves her argument true – she’s not how you’d picture a CEO. She’s in a T-shirt and tracksuit and the backdrop, her Victorian London home, looks like an Instagram fantasy after the nine months she’s spent publicly renovating it. Her new puppy, Ziggy, is running back and forth across the camera and she laughs as the doorbell keeps ringing – “Deliveries only seem to come when I’m in the middle of Zooms.” She is honest, vulnerable and open, and crucially only 23. She’s also one of the most watched entrepreneurs in the country.

Beverley is the owner, founder, and chief executive of three different, highly popular fitness businesses: B_ND, a gym equipment shop, Shreddy, a fitness app, and Tala, an ethical athleticwear outlet that has enjoyed explosive popularity among young women in the past year. None of these companies has been funded by external investment – something Beverley says “bamboozles” a lot of people. Since launching last year, Tala has made £6m, landing Beverley a slot in this year’s Forbes 30 Under 30.

Part of her businesses’ success is down to her own social media popularity. Since the age of 18, she’s been documenting her life to an audience of half a million people on YouTube alongside her prodigious Instagram following. Beverley, who posts three times a week on YouTube (even while pursuing a music degree at Oxford), became a household name among young British women under the moniker GraceFit – sharing content that was mostly lifestyle-y but with a regular focus on fitness. B_ND was launched in 2017, while Beverley was in the middle of her degree, and Tala was launched as she was finishing her exams last spring. 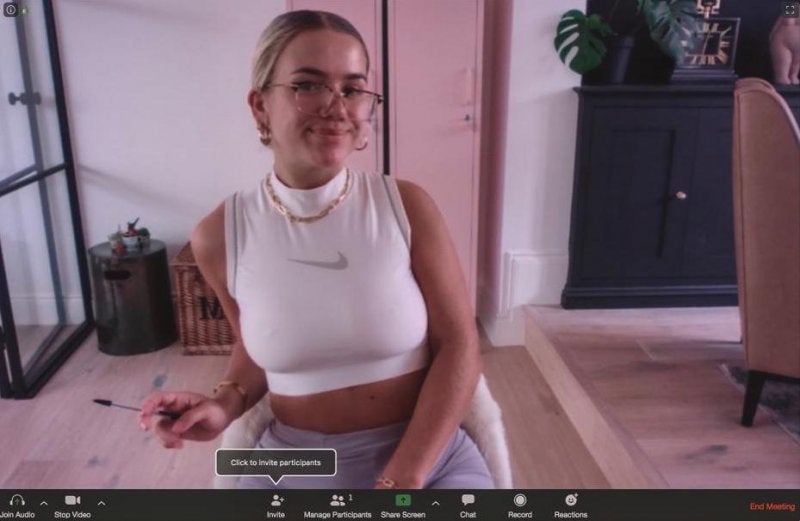 Grace Beverley in her home, photographed exclusively for the New Statesman

“When I look back to a year ago, it seems like it was about ten years ago,” she tells me. “I feel like I’ve been on a crash course and I think so does everyone on the team.” Tala, Beverley’s main business focus, is run by a group of people who are demographically similar to her – mostly young women who left university a few years ago.

Tala is known for being one of the few affordable brands to make ethical fitness clothing – at present, 92 per cent of their products are upcycled. Beverley explains that the firm chose to sacrifice the extra eight per cent in order to keep prices low and achieve healthy revenue, providing money to invest in research and development for the technology to make 100 per cent ethical athleticwear eventually.

“We have a huge community – people love it, people love what it stands for,” she says. “And it’s amazing to see that the concept has really worked… I was so sure of this concept that [it was worth] taking a hit on the profit margins and to produce sustainable and ethical clothing at a competitive rate.”

“It’s been such a journey, and you know, £6m in the first year of your business: that is insane. We didn’t even spend anything on marketing until this year, so it’s just been unbelievable.”

While Tala prides itself on its ethicality and competitiveness, it is better known by many fans for its inclusivity. The brand was immediately lauded at its launch for both its racial and body type diversity. But Beverley says she was surprised by how significant the response was to a decision she saw as obvious.

“We want to be so carefree about it,” she tells me of the diverse models Tala features. “We understand there are a plethora of different types of people who wear our clothes or do our workouts. They are all welcome and they should come on our page and feel welcome no matter what they look like, no matter what they do, no matter where they’re from. We really tried to make it something that never says the words ‘body positivity’, never says ‘inclusivity’, apart from when we launched and we were like, ‘We’re setting a standard for ourselves, and for everyone else.’”

Beverley says that although her customers may describe her businesses as inclusive, she cannot claim that she or they are “body positive”.

“I’m very much in line with social norms of what kind of society finds attractive,” she says. “You know, I’m white, I’m slim, I’m all of these things.”

She’s wary of using body positivity as a marketing tool and “invading” that space. “The fitness industry completely took over the body positivity movement… and it was people who were societally seen as attractive sitting there and being like ‘Hey guys look! I’ve got rolls!’”

“It was a complete ambush of that whole movement that actually isn’t made for people like me,” she says. “The fitness world is probably one of the most fatphobic and non-inclusive industries there is.”

Beverley admits this is “tricky territory” to square with her fitness app, Shreddy, which provides users with home workouts, meal plans and classes for £9.99 a month. The marketing for Shreddy does not feature the full range of bodies shown by Tala, with predominantly slim, toned women across the website. One of the app’s most effective marketing tools is its “Shreddy transformations”: “before and after” shots of users’ bodies. Shreddy’s Instagram, as well as Beverley herself, will share these side-by-side images at least once a week – and anecdotal evidence suggests these pictures are often what tips people towards finally subscribing.

“We want to make it clear that this isn’t some sort of home productivity contest or transformation competition because we’re all stuck at home [in lockdown] and everyone needs to come out of this a whole different person, post-summer holidays style,” she says. “It isn’t that. And that’s what we’ve tried to make really clear as well.”

“On the one hand, we’ve been able to change so many people’s lives, or be a big part of people changing their lives, whether it’s recovering from an eating disorder or losing weight that they wanted to lose,” Beverley says. “And we need to be able to champion people and support people. But we also need to be able to understand, like, ‘Hey, if following us isn’t good for you, please, please unfollow.’ And opening that conversation to a more understanding point of view rather than just being, ‘This is what we post, so there. Whatever.’”

Beverley admits this can be something of a minefield and she wants to keep Shreddy separate from the traditional, often toxic, gym experience. “You can’t walk into a gym without a wall of personal trainers telling you ‘I can help you lose this’ or ‘Sign up to this and lose this much.’” 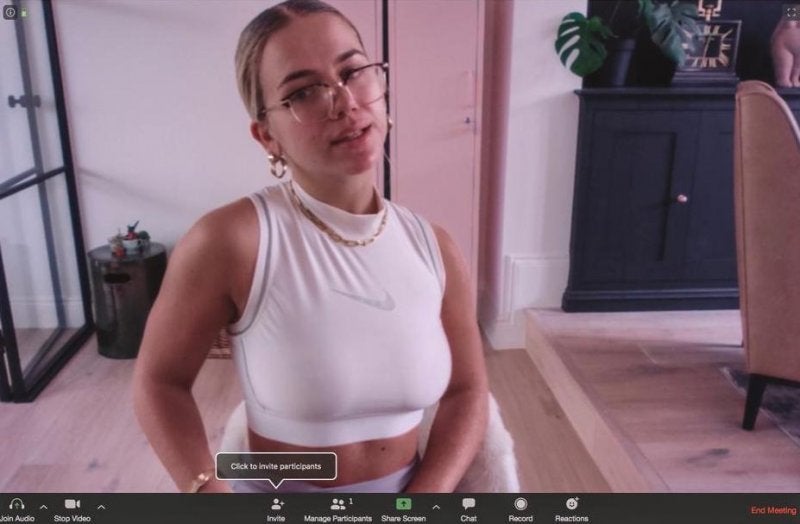 Grace Beverley in her home, photographed exclusively for the New Statesman

Beverley knows the fitness industry is changing, both because of the impact of Covid-19, but also through her company’s disruption of the market. “These bigger companies are really looking at us,” she says, “and are going, ‘Hey, if they can provide that option for the same price, why wouldn’t people be buying their things?’” She says it’s been a “whirlwind” transforming Tala from a concept into a well-known brand in the space of a few months. “People [are] saying, ‘I only buy Tala now because why would I buy a fast-fashion activewear piece when I could actually buy something that is sustainable, that is ethical and at the same price point?’”

She admits there are significant business challenges at this early stage (some parts of her companies have soared during the pandemic while others are down by 46 per cent). But the challenge our conversation continually returns to is her struggle with her self-perception.

“You put yourself in a box,” she says. “I was very squarely within this kind of influencer, YouTuber area, and that was also essentially because I was at university. I don’t know if I would have even done [YouTube] if it had been three years later and I had been starting my first job.”

Shedding her influencer status has been one of Beverley’s biggest hurdles since launching Tala, and she explains that it’s hard for people to understand that she never regarded YouTube as her job. “People had me at a point before I’d started my career, but what people saw was that being an influencer was originally my career, and then I went into something else,” she says. “I think it’s difficult because I started at 18 and now I’m 23, and so much changes between those ages in anyone’s life…  I’ve had a huge rebound from all that influencer stuff because I’ve been like, ‘People won’t take me seriously, people won’t take that I actually know a lot more about business than I ever have about fitness.’”

Beverley says the hardest part is that she has no blueprint; there is no one who has done what she has done at her age, during university and the transitional year, before contending with a global pandemic. “There are very few people that I look at where I’m like ‘that’s where I want to be,’” she says. “And especially in the past few months, I’ve been taking a step back and being like, I don’t need to follow this kind of blueprint. I don’t need to say ‘I’m an entrepreneur, so I need to wear a suit, I need to go to these meetings, I need to not post on Instagram, or not post in a bikini or whatever it might be.”

“Instead, I can say, ‘I’m Grace, I have three businesses, I also have social media. I also go on holiday, I also have friends.’ All of these things can turn into my own blueprint and I think the first person I need to convince is myself. None of those need to be explicit, linear moves from one to the other – it can just be that I’m doing it. That qualifies. And that’s good enough.”