More than a thousand volunteer groups have mobilised across the UK in less than a week, in light of the coronavirus outbreak. Focused in specific communities, and even on individual streets, locals are coordinating via Facebook and WhatsApp to help those around them who are at a higher risk.

Volunteers in these groups are offering to pick up prescriptions, buy groceries, walk dogs and simply chat by phone or email with vulnerable or isolated people in their communities.

Under the umbrella organisation Covid-19 Mutual Aid UK, which now has its own website and Facebook page with more than 11,000 followers, this movement was founded after a few messages exchanged in a WhatsApp group among friends in Lewisham, south-east London.

“A couple of friends were doing some leafleting, street by street, very localised, for their neighbours,” says Anna Vickerstaff, a Lewisham resident with experience of community organising who was part of the original WhatsApp group. “We just wanted to build a sense of neighbourly solidarity – we’re here if you need anything.”

With similar operations emerging organically, Vickerstaff thought there would be merit in sharing tips for organising and volunteering, and set up the Mutual Aid Facebook and Twitter accounts. At the time of writing, there are now more than 1,000 participating groups. Some of these have 300 members, while others are made up of ten or so locals. A constantly updating list of the groups, from Carrickfergus in Northern Ireland to villages in Somerset, can be found here.

“Local people are rallying together, to step up and say no one’s going to face this pandemic alone,” says Vickerstaff.

With the government now urging over-70s to stay indoors, elderly people will need the help of these informal networks to receive the supplies and emotional support they require through the peak of the pandemic. This support will also be needed by other vulnerable groups including immunocompromised people, pregnant women, anxiety sufferers and anyone who is isolated or alone.

“Finding the Islington Mutual Aid group lifted our spirits and changed our view of the future,” said Hope Winter-Hall, a resident of Islington, north London, who has a disability and is self-isolating with her 92-year-old mother. “We already know that social services and the NHS were overwhelmed before this virus hit.”

Guidelines for safely helping neighbours are available on the website, provided by a care group. These include simple pieces of advice like avoiding leafleting in groups, washing hands before and after leafleting and not licking fingers to separate pieces of paper. Wearing gloves is no longer recommended as they are harder to disinfect and can give a false sense of security.

“Working street by street is the most effective way of organising, both in terms of limiting the spread of the virus but also in terms of building neighbourly solidarity,” advises Vickerstaff.

Aside from help with shopping and chores, some of these groups are devising new ways of keeping communities connected.

“There’s one group that said when the schools close they’re going to set up a system where schoolchildren who are at home, maybe their parents are going to have to find something for them to do, are going to draw pictures that the group will then collect and deliver to elderly people who are isolated by themselves in their local area, which I think is really sweet,” says Vickerstaff.

There are also shared local resources in open-access Google documents where people can exchange ideas and advice, as well as a template for a letter and note you can put through neighbours’ doors: 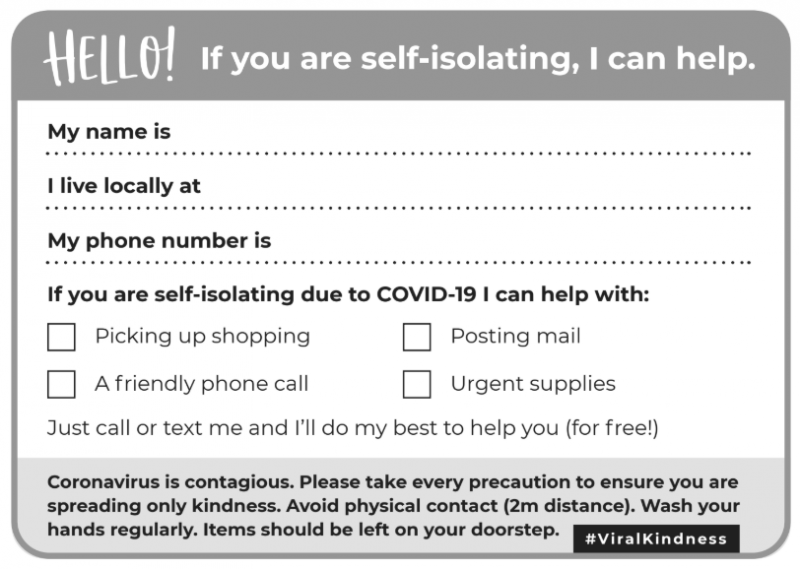 Mutual Aid UK is not the only volunteer network emerging in the face of coronavirus. The Bristol-founded community organisation group Acorn (founded in 2014) has set up a dedicated website matching volunteers to people in need with groups in Brighton, Bristol, Nottingham, Manchester and Sheffield.