There has always been something different about Paul Zimmer. In 2015, when he joined Musical.ly, the app for sharing lip-syncing videos that was bought by TikTok in 2018, he posted near-daily clips of himself doing jerky dance moves, acting out scenes with his fiancé, Jamie, and flashing his abs. Within 18 months, Zimmer’s seemingly mundane videos were regularly drawing half a million views per clip and he became one of the most popular users on the app. By the start of 2017, Zimmer had gained an audience of just under a million Instagram followers and a whopping seven million on Musical.ly. These followers then transferred to TikTok when it was bought, giving Zimmer one of the largest followings on the world’s fastest-growing social media platform.

But in April 2017, Zimmer’s empire began to crumble. Using Musical.ly’s sister app, Live.ly, a platform for livestreaming videos, Zimmer had been soliciting “gifts”: paid-for stickers that users could send to their favourite stars, which transferred the cash value of the gift to that star, from his fans in exchange for favours such as shout-outs in videos, sharing their videos on his page, and sending them personalised DMs thanking them for their donation. At the time, this was a relatively normal practice (if a slightly dodgy one, given it involved users as young as 13). But Zimmer rapidly became Musical.ly’s most talked-about star when hundreds of users complained that he had not honoured the promises he’d made to secure these gifts, prompting the hashtag #BanPaulZimmer. In the midst of the controversy, he disappeared from social media entirely – wiping his Instagram and YouTube channel of all content.

Spam me with likes picking some texting buddies

For nearly two years, Zimmer remained silent. His fiancé, Jamie Rose, who featured heavily in his videos at the time, also disappeared from social media at around the same time.

That was until late last year, when Zimmer reappeared with a bizarre post that many claim was an attempt to rebrand himself as a new person, Troy Becker: someone with a different age, job, and identity. 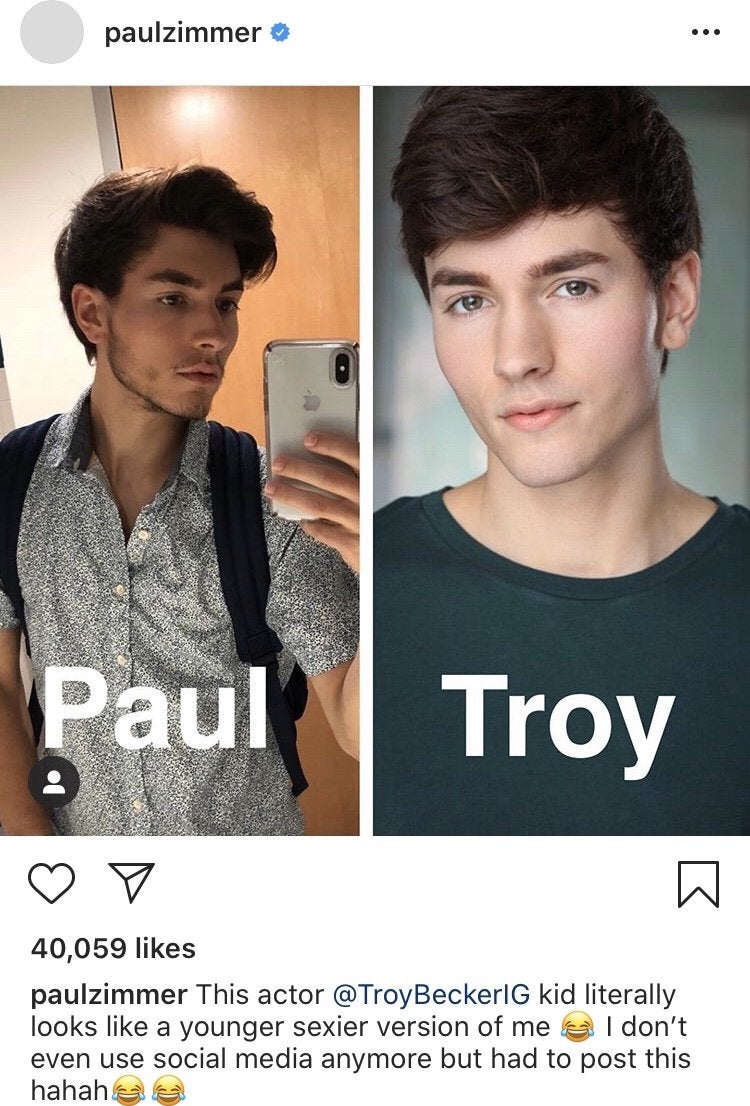 On 14 October 2019, Paul Zimmer posted a side-by-side image of himself (sporting a barely-grown-out beard) next to another image of what appeared to be himself, albeit clean-shaven. “This actor @TroyBeckerIG kid literally looks like a younger sexier version of me,” Zimmer wrote. “I don’t even use social media anymore but had to post this hahah…” Clicking on Troy Becker’s Instagram led to an almost unpopulated account, with only 11 posts uploaded before Zimmer’s side-by-side post. For a Gen-Z actor, this would amount to an unusually sparse social media presence.

It’s hard to track the fan response to this post because comments on Zimmer’s Instagram are disabled. But almost two months later, on December 10, another “Troy Becker” post was made, addressing those who had responded that Becker was in fact Zimmer by saying: “IM TELLING YOU HE IS MY YOUNGER BRO [crying laughing emoji]”). The third post, on 18 December, was a bombshell:

“Hey it’s Paul Zimmer,” he wrote, “this is prolly gonna be my last social post ever… I have come to a place in my life where being in the spotlight and being an entertainer is no longer my passion… although it deeply saddens me to leave so bluntly, especially that so many of you have watched me for so many years…. I didn’t wanna leave my social media pages just sitting to die… soo I have decided to give my social media accounts to @troybeckerig because he is one of the dopest people I know and he is literally my younger twin my much younger twin I believe Troy is 15 or 16 years old hahaha…”

Zimmer was apparently offering to give up public life and hand over an audience of more than eight million followers to a teenage boy who just happened to look exactly like him.

In any situation, this would be an unusual, and unusually generous thing to do. But for many commentators it was simply unbelievable. YouTube sleuth Haylo Hayley is a long-time Zimmer obsessive. Hayley posted a video on her channel in October, following Zimmer’s first Troy-related Instagram post. “If you listen to [Troy’s voice on his Instagram] it sounds exactly the same as Paul Zimmer,” she said. For her, it seemed painfully obvious evidence that Troy Becker was just Zimmer in new clothes. “I know for 100% it’s Paul Zimmer… [because] I met him in person when I went to New York in 2017″, she added. “I met Paul and Jamie [his fiancé] there.”

Another YouTuber, Danny Gonzalez also made a video about Zimmer’s apparent transformation to Troy Becker on 30 December 2019, after Zimmer revealed that he’d be giving “Troy” his social media accounts. Gonzalez included videos and pictures of “Troy Becker” taking part in an acting class with Zimmer’s fiancé at The Heller Approach, an acting school in LA, on June 10 – four months before Zimmer’s first post about Becker. The appearance and voice of Zimmer and “Becker” appear to be identical.

Zimmer’s followers didn’t need a YouTube explainer video to convince them that Zimmer and Becker are the same man – on TikTok, every video posted as “Troy” brings in an avalanche of comments on the subject. “Paul it’s really creepy you’re pretending to be 16”; “nobody is falling for it”; “you’re literally wearing the same earrings that you always post photos in”; “even their voices are the same”; “you’re not fooling anyone”; “CEO of pretending to be a different person”. There are more than ten thousand comments on Zimmer’s recent TikToks. It’s difficult to find any that aren’t related to, and critical of, the apparent rebrand.

Zimmer continues to maintain that he and Becker aren’t the same person. However, Becker’s IMDb page indicates the actor may have had doubts of his own. While in its current state it includes very little information, a cached version from 7 October 2019 shows that Troy Becker’s “nickname” was “Paul Zimmer”. The page was cached a week before Zimmer did his original side-by-side post having apprently discovered his doppelgänger. Until Monday morning the trivia section on Becker’s IMDb page also read “Troy Becker is an alter ego of Paul Zimmer of musical.ly fame” and “Troy Becker was formerly known as Paul Zimmer as a musically star”, although these could have been added by fans rather than by Zimmer himself.

I contacted “Troy Becker” through his social media accounts and website, but he did not respond to requests for comment. He continues to post regular videos to TikTok and Instagram. Zimmer shows that, even when you seem to have been permanently cancelled, there are creative ways to make a comeback – and he has undoubtedly regained everyone’s attention.

Update: This piece was updated at 11:30 on 9 January 2020 to reflect that Zimmer has deleted his Instagram account, deleted his TikToks as “Troy”, and has changed his TikTok handle.