Over dinner at Pizza Express a couple of weeks ago, a friend was telling the table of her dating woes. “I have been spending so much less time around men,” she told us, “I can literally show you how much less time I’m spending with men.” She proceeded to whip open an app to demonstrate the difference between the amount of time she had spent on romance in the last month since her break up and the month before. It had all been handily logged and turned into a pie chart on her phone, ready to be accessed at any given moment.

My friend is an avid user of Life Cycle, an app that uses a combination of your geo-location data, the information you physically log, and your digital habits to track how you spend every second of your time. From work to sleep to dating to even time spent queueing, the app gives you an automated pie chart that can compare your habits day-on-day, month-on-month, and year-on-year. But while this may seem niche, Life Cycle is just one of the hundreds of newly popular services giving users the ability to self-reflect on the minutiae of their lives – and optimise their lives around the results.

Our appetite for self-reflection is on the up, with Google searches for the term “self-reflection” steadily increasing over the last eight years. “Tools” such as bullet journals, which encourage users to habit track to see their progress over time, have exploded in the last five years and apps related to health and lifestyle have become the fourth most available product type in the Google app store.  The reasons that people use these services seem to split in two: for self-reflection, internal curiosity, and personal observation (almost the same benefits of a DNA test) and for self-optimisation (reflect on your time in order to do your life better). But while many users find these apps useful or simply interesting, many take the “findings” as gospel and implement them to potentially toxic effects.

Another user of Life Cycle is 23-year-old Fatima. She downloaded it when she returned to her home country of Bahrain after finishing her studies at a French university three months ago. “When I was in France I made a promise to visit my grandparents and spend more time with them once I was back home,” she tells me. “After the first month, I realised that I wasn’t spending as much time [with them] as I hoped, but more time hanging out in cafés. So the next month I tried to balance it out and have tea with my grandparents instead! It helped me balance how I spend my time.”

Fatima says that using Life Cycle is a source of satisfaction, giving her a sense of achievement at the end of each day. “There’s always a little note like ‘congrats you took more steps today than your average for Sundays,’” she says, “and it’s good to end my day feeling accomplished even if it’s not really that big of a deal.” Other Life Cycle users have posted on Twitter that the app has become a scratch that they need to itch weekly or daily, and causes them anxiety if they don’t “accomplish” their ideal day. 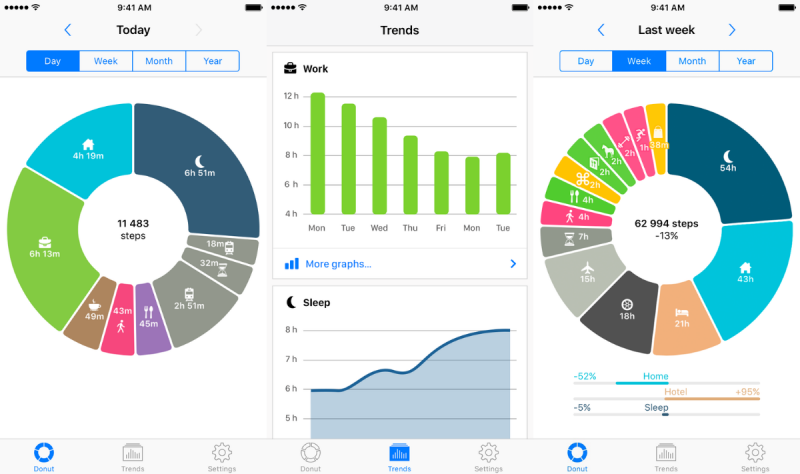 Fatima also tells me that she now relies on Life Cycle to maintain her mental stability. “I love actually getting different results than the past month because for a while it felt like every day was just the same,” she says. “Whenever I feel this way I know it’s the start of a depressive episode. This app reassures me that I’m alive, that I do visit new locations, and that I do spend time meeting the people I love. It really helps me to shake off these thoughts in my head.”

Scott, a 23-year-old news producer in Alabama, went looking for a reflection service specifically to improve his mental health. He came across Reflectly, self-described as “the world’s first intelligent journal”, giving users a variety of tick boxes and prompts in order to create a “diary entry” for every day.

“I had been going through a tough time adjusting to my work life and the amount of stress I was dealing with,” Scott tells me. “My primary care physician had recently diagnosed me with adjustment disorder with mixed anxiety and depression, so naturally, instead of seeking professional help, I went searching for my own way of helping my mental state.” Not wanting to pay the hefty price for a therapist, Scott now uses Reflectly religiously. “I make sure to keep up with daily use of my journal – if I want to keep up with a more positive mindset, it needs to be a constant lifestyle choice.”

“There were things I didn’t want to spill out to anyone, but I wanted to at least spill out,” Kate, another Reflectly user, tells me. “It wasn’t necessarily stress that made me want to download it, but it was more of releasing my anger.” Unlike Scott, Kate feels that she doesn’t notice a huge improvement in her life from using it and subsequently uses it less often. “It made life seem less stressful and anger-filled since I had a place to rant my feelings out… it made me feel like that weight on my shoulders was finally leaving.”

While Scott and Kate’s experiences have been mostly positive, Twitter is littered with complaints about Reflectly causing more stress than it soothes. Reflectly users have noted its Premium option – where users pay a monthly or annual fee in order to get their diary entries synthesised into weekly charts and scores showing how their mood has improved – is difficult to cancel and they have claim to have been repeatedly charged for Reflectly despite having already opted out. Another problem is that Reflectly can spam users with reminders to fill out more entries, popping up on their phones multiple times a day. This inundation of reminders, coupled with slightly shame-y language in the app if you haven’t filled out an entry for several days, often creates a new pressure for users when they were looking for relief.

Reflectly 30 seconds into using it: btw I’m charging your card £45 LOL u joke

Life Cycle and Reflectly have their problems, but not all of these services cause users distress. 10Q, another self-reflection service, is an effective time capsule, where users answer ten questions over ten days – questions such as “what was a moment you felt joy this year?” or “what would you like to have accomplished this time next year?” Then, answers are “locked away” for a year and sent back to users on the day they answered them a year later. This gives users the ability to self-reflect at a more delayed pace and stalls immediate gratification – and crucially doesn’t give its own analysis as to what that information means.

“I found receiving my answers a year after writing them such a fascinating experience,” Susi, a 38-year-old copywriter tells me. After originally covering the service as a journalist back in 2008, Susi has used 10Q for over 10 years.

“Looking back over previous years, it’s apparent that the things that hurt like hell at the time have a way of working themselves out,” she says. “In 2017 I wrote about the excitement of being pregnant for the first time and the anticipation of having a baby although I miscarried a little while later. In 2018, when I read about that, I was still trying to get pregnant which was fairly gutting. And then, on the last day of answering the questions that year, I had a positive pregnancy test. This year when I received the answers, I read them with my three-month-old daughter on my knee!”

Regardless of which service they’re using to self-reflect, users to feel that they get something out of it. “It definitely has improved the quality of my life,” Scott argues of his time on Reflectly. “Writing down all the positive things going on has really helped open my eyes and realise that it’s not all bad. I have a lot going for me, and I just need to recognise it. It’s so easy to forget the blessings you have until you write it all down.”

“Using 10Q is a tangible example of the much-worn phrase ‘this too shall pass’,” Susi says. “It teaches me that it’s worth being adaptable. Plans have a habit of changing and there are no right and wrong decisions in life. It teaches me that life is just a series of paths to take.”