When companies like Huel and Soylent became popular around five years ago, they swiftly became synonymous with the worst of tech bro culture. Much like the meal replacements targeted at women in the nineties and noughties, these new products are multi-vitamin drinks which claim to have all of the protein, nutrients, and oils a human being needs to stay healthy.

This time round, though, they were mostly adopted by men in the tech world under the guise of “bio-hacking” and “personal optimisation”: meal replacements became a popular way for the men of Silicon Valley to save precious hours lost to cooking, meal planning, and grocery shopping. Yet even as CEOs and VCs heralded them for their time-saving abilities, they were mocked by the rest of the world for being tasteless shakes that douchey tech obsessives pretended to love.

Stephanie, a 30 year old freelance journalist based in London, is one of the many people who was initially turned off by meal replacements because of their tech bro connotations. “It sounded like a Silicon Valley trend for people who wanted to maximise efficiency by getting all their nutrients from a single, joyless food source,” she says. “Or a last resort in times of food scarcity: something we’d be drinking huddled in nuclear bunkers.”

She eventually tried Huel when encouraged by a colleague. Despite its tech bro reputation, the marketing of Huel has played well among many women and non-binary people. In the past, female-targeted meal replacements such as Slim Fast marketed themselves on the idea that it would help women lose weight; male-targeted protein shakes focused on muscle-building. Huel, though, “seemed to be a like-for-like meal substitute,” says Laura, a 23 year-old student based in Edinburgh, “rather than something aimed at changing your body.”

In a world in which women feel social pressure to spend time worrying about planning outfits, putting on makeup, Huel felt like a simple way to gain back time lost to the patriarchal structures.

“It’s like having a time machine that gives you back half an hour or more every day,” agrees Hannah, a 40-something academic based in Wales.  As someone with a busy schedule, frequent travel, and an interest in eating vegan and reducing food waste, Huel helped her easily fit all of these needs. “If I’m at a festival… on a long journey… it’s just perfect,” she says.

Amelia also tells me that meal replacements particularly helped her cut back on spending time on things she genuinely didn’t like.  ”I’m not really into food,” she says. “I like cooking it for other people but for myself I’m not hugely bothered. A meal replacement means spending less time on chores I find totally mind-deadening and more time on things I care about doing.”

“I liked that I could get a cheap, relatively nutritious meal without having to constantly plan what I was going to eat,” agrees Laura. “I’m a student – effectively a 24/7 occupation – so I don’t have the time, budget or mental energy to cook from scratch every day.”

This is another key appeal of meal replacements: everyone I spoke to noted how affordable they made a balanced diet. While many people spend hundreds of pounds a month on bland, unsatisfactory food, many meal replacements cost roughly £2 per meal.

“In London, the cheap lunch time option is often a sad supermarket sandwich meal that sets you back about £4 but isn’t going to fill you up,” Stephanie argues. “If you’re going to be underwhelmed, you might as well save a significant amount of money and time, while being healthy, with a meal replacement.”

“I was super busy and often ended up having two whole meal deals for meals per day,” Amelia agrees. “This seemed financially and physiologically disastrous. I also had quite bad anxiety around that time. Huel seemed like a good way to be able to ‘eat’ without feeling like I might be sick.”

Pax, a 29 year-old non-binary comedy producer based in Glasgow, found meal replacements a godsend in a similar situation. Like Amelia, they told me that they suffer from depression and anxiety and work irregular hours, which meant that they used to regularly miss meals due to stress. When they did eat, they tended to opt for unhealthy, expensive options, such as ordering in a pizza. Using Huel helped them to start treating their body better.

“It’s useful to have an instant nutritious meal in the house at all times for bad mental health days,” they say. “And when I’m working long hours or having a stressful day, it’s cheaper and healthier than ordering takeaway or going out for lunch.” 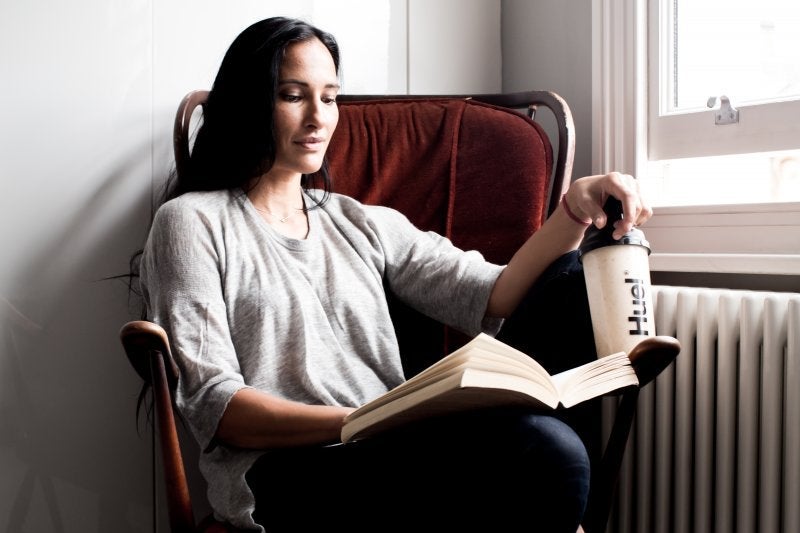 Holly, a 33 year-old journalist, tells me that she suffered from an eating disorder for most of her life. She says that using meal replacements has helped her not only stop eating so much junk food, but to actually have a healthier attitude towards food.

“Since I’m the sort of person who goes for easy, quick food, a lot of my previous breakfast and lunch choices were junky fast food,” she tells me. “Huel has helped me see food as fuel, not a reward or a punishment or a big emotional thing. It’s improved my diet significantly.”

In fear of looking like a Huel advertorial, it’s crucial to note that, although many people Huel responsibly and healthily, there are many reported cases of people who don’t. Several of the people I spoke to referenced friends or colleagues who used Huel to limit their caloric intake drastically or to crash diet – and whether or not it’s a tech bro using it, meal replacements can in some cases lead to potentially disordered eating.

Even when people approach Huel positively, not all experiences are positive, and using meal replacements can lead to troubling physical results. A quick glance at the Huel’s online discussion forum reveals a horror show of “Huel poops”, “farting disasters”, and cases of people’s teeth falling out after spending weeks and months not chewing.

All that said, the demographics of meal-replacement users seem to be changing – and to those far from the stereotypes borne out of Silicon Valley. And increasingly, women and non-binary people are finding meal replacements as a feminist option to help them get closer to “having it all” without getting bogged down with what many of them see as menial work.

“It’s a shame because when I’m less busy cooking can be a joy, but I also want to do ‘All The Things’ – like gym, life admin, pursuing non-work related interests, TV, social media and whatever in an evening after work,” Stephanie says.