The popularity and ubiquity of online fan fiction (fan-written fiction created based on existing narratives) cannot be overstated. While often relegated to a niche in internet culture, assigned the same nerdy status as Tumblr teens and Reddit bros, “fanfic” is due the credit for a growing number of pieces of mainstream culture (Fifty Shades of Gray was originally Twilight fan fiction). But while fanfic has thrived, the internet has remained an unobvious place for the majority of society to go to read fiction. Opting for Kindles, literary magazines, or hard copy books, mainstream culture tends to use digital platforms for consuming news stories, culture reports, and opinion, and leaves its literary consumption to more traditional channels.

However, that could all be changing. The New York Public Library announced last week the launch of their series called “Insta Novels”: a “revolutionary new program that will bring digital novels to Instagram”. Classic novels, poetry, and short stories will be shared via their Instagram Stories feed, making literature accessible on a platform that millions of people visit daily. The first in the series is Alice’s Adventures in Wonderland; told through a series of animated videos and pictures spliced between images of each and every page of the book. It will be followed by the Kafka’s The Metamorphosis and the short story The Yellow Wallpaper. 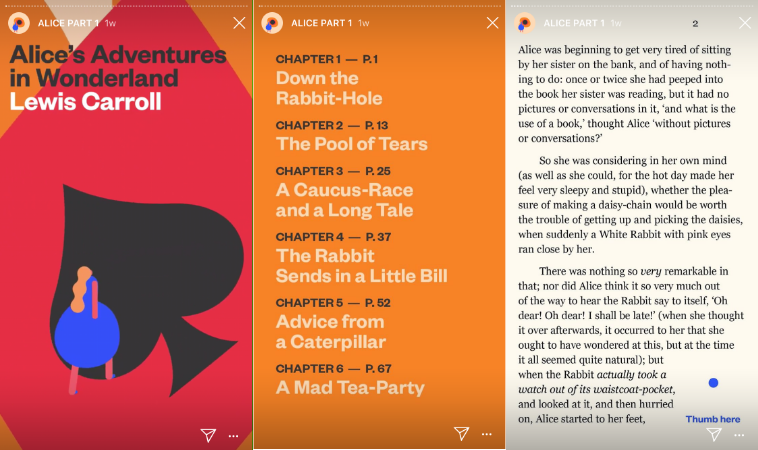 But while this “revolutionary” series is seemingly new, it’s merely one piece of a wider trend. One where brands, organisations, and publications are devoting time and effort to not just push out, but create literary content, exclusively designed to go out on digital platforms.

The Los Angeles County Museum of Art (LACMA) is one institution that’s been doing this for years. Since 2015, LACMA has been using quotes from poems, songs, and novels to complement thematically similar art on its Snapchat feed, drawing in users to the museum that may not otherwise have found it relevant, or even heard about it. “It opens up new ways of looking at art, one that doesn’t necessarily require a background in art to appreciate,” explains a blog about the social media campaign. LACMA continues to Snapchat literary jokes on top of sculptures, statues, and woven basket displays – to an audience in the hundreds of thousands.

But it’s not just art museums and libraries telling stories. Digital publications, which traditionally posted standard articles on politics, sports, or just general news reporting, are now putting effort into literary stories that take readers on a journey – without explicitly pushing an argument or informing you of a situation. SB Nation’s “What will football look like in the future” and The Outline’s recent short story about two friends saving each other from being struck by lightning are just a couple of examples of publications’ increasing willingness to take the risk in publishing these literary-like stories. A risk that, overwhelmingly it would seem, is paying off.

SB Nation’s piece, also called 17776, received widespread critical acclaim and viral popularity, garnering over 2.3 million page views in a matter of five days. It was popular to the point that the piece now even has its own (incredibly thorough, I might add) Wikipedia page. LACMA too noticed the benefits paying off from its delve into the literary, crediting its Snapchat series for its own growing appeal to previously difficult to reach young people.

And the trend is breathing new life into publications that have been publishing fiction online for years. The New Yorker has published short stories and other works of fiction in its magazine for decades, but these pieces largely haven’t received international recognition online. However, in December 2017, the magazine published the short story “Cat Person” which, in a matter of days, became a global digital phenomenon. The piece launched thousands of theories, debates, and endless Twitter arguments, giving The New Yorker millions of page views for the sort of work that would not typically have thrived online.

“Instagram unknowingly created the perfect bookshelf for this new kind of online novel.  From the way you turn the pages, to where you rest your thumb while reading, the experience is already unmistakably like reading a paperback novel,” says Corinna Falusi, the Chief Creative Officer at Mother, the creative agency that worked with the New York Public Library on their Insta Novels. Indeed, brands are realising that there’s a lot more than can do, even with what already exists, to engage more users not just to visit their sites or platforms, but to stay longer than before. With the ease of creating digital stories for social media (not even having to build a new platform of their own), many brands don’t even have to go through the arduous task of creating a new place to host these stories.

“From the way you turn the pages, to where you rest your thumb while reading, the experience is already unmistakably like reading a paperback novel,” Falusi says.

While “read more Victorian novels” may not be at the top of everyone’s to-do list, using digital platforms to publish literary stories online is moving digital fiction from the niches of the internet into the mainstream. And for better or for worse, it’s increasingly obvious that public appetite for it is far from waning, meaning we can expect to see more literary stories popping up on our screens.