Funny, that Tory habit of mocking the left before instantly stealing its clothes, isn’t it? First they did it with energy bills; now they’re doing it with slightly awkward political festivals.

Just three weeks after thousands of activists descended on north London for Labour Live, the infuriatingly named “Troubador” Cafe and Club on Brompton Road is to play host to the Big Brexit Party. The promised acts include the pro-Trump, pro-Brexit American comedian Will Franken; DJ Rebop, who like all up and coming DJs doesn’t seem to have any web presence whatsoever; and “live painting from poshfruit”, a libertarian artist whose work features a lot of Union Jacks, pictures of Britannia and her pet lion standing on a box labelled “freedom of speech” while surrounded by shadowy hordes wearing gas masks and suspicious beards, and other stuff like that.

Then there’s Chloe Westley, an Australian who you may have encountered as the Taxpayers Alliance’ rent-a-gob du jour, but who will be appearing here to read some of her Brexit poetry. (This is not a joke.) Some sample lines:

The second line of the Australian national anthem: For we are young and free.

For we are young and free. Britain, when I landed on your shores, You were neither young or free.

In roughly the same way that her employers seem to think that economics is as simple as “slash taxes regardless”, Westley seems under the impression that poetry is merely a matter of putting the line breaks in the wrong places. The poem ends…

I wouldn’t change your old ways

Instead, I’ll spend the rest of my days here trying to defend them.

The highlight, though, is the Taiwan-born musician Meg Lee Chin, who is apparently “best known for her work with the anarchic industrial supergroup Pigface”, and whose latest music video “England’s Mask – A Song for Brexit and Anti Globalisation” made me literally hysterical while sat in a room on my own. I’ve watched it three times now, and I’m still not entirely clear on whether I’m meant to take it seriously.

Music activist Meg Lee Chin provides an alternative answer to the question “what does Brexit mean?” Her new music video questions the role of the British Royal Family as the bogus face of respectability for the spider’s web of secrecy surrounding Britain’s hidden financial empire.

In other words, it’s a song about the Royal Family, in which the chorus runs, “Are there any humans – are there any humans left”, and towards the end of which Chin shouts, “NO! I didn’t think so”. This, remember, is being presented an alternative answer to the question, “What does Brexit mean?”

This is not a joke either.

To really get a sense of quite how out there this song is, you need to look at the pictures that accompany it. It opens on this image, which is a bit like the illuminati pyramid, while also being oddly reminiscent of the 1977 Doctor Who story “Image of the Fendahl”. 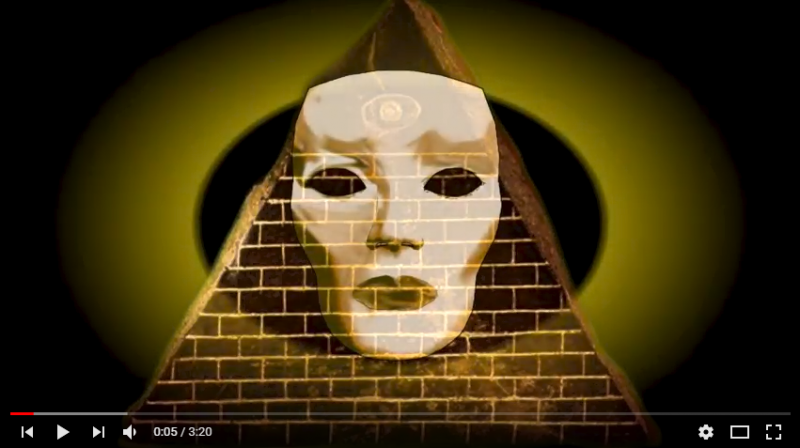 A few seconds later, the lyrics warn of “many souls propping up just one face”. The face in question turns out to belong to the European Commission president Jean-Claude Juncker: 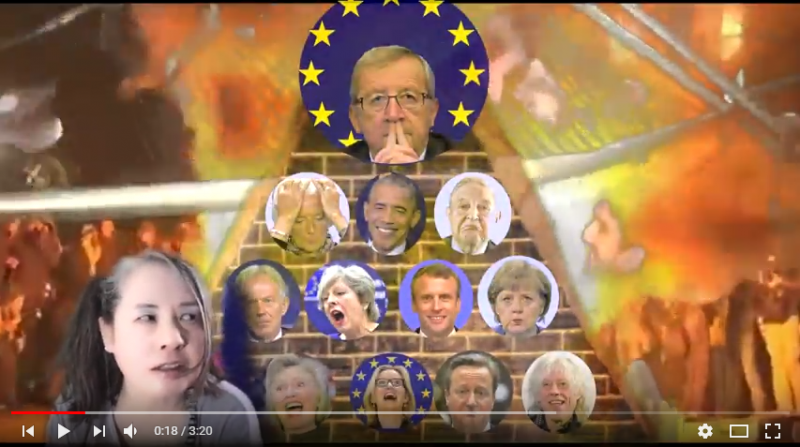 And, two seconds after that: 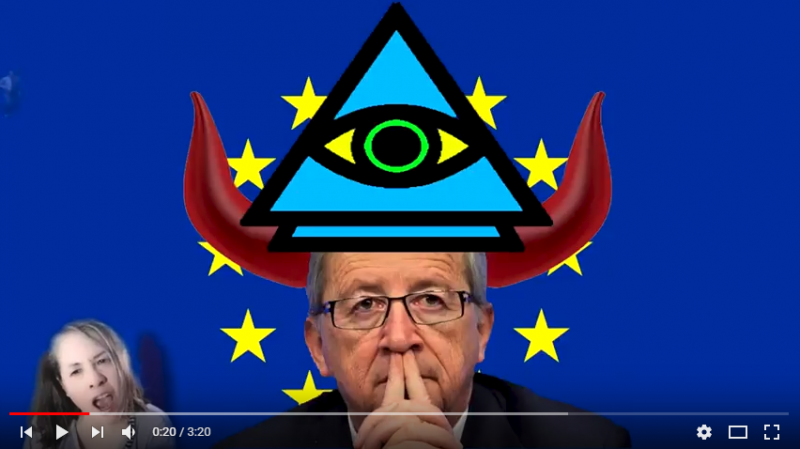 There’s a lovely bit with some SIMS running across the bottom of the screen to accompany the lyric “an island nation makes a dash for the door”: 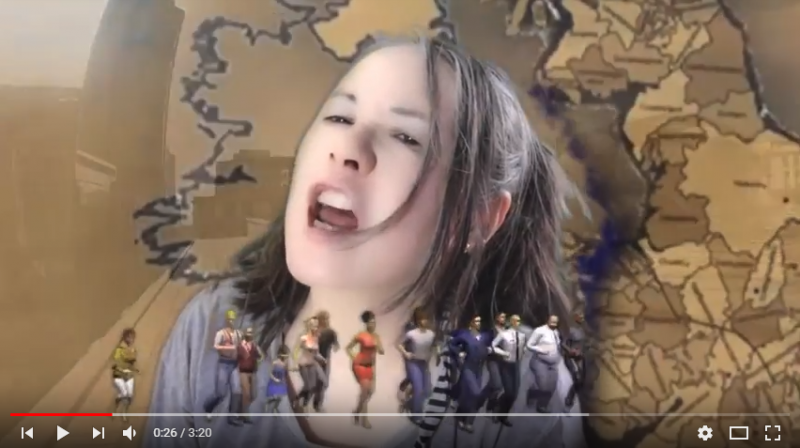 Then there’s this shot of Tony Blair in a hoodie: 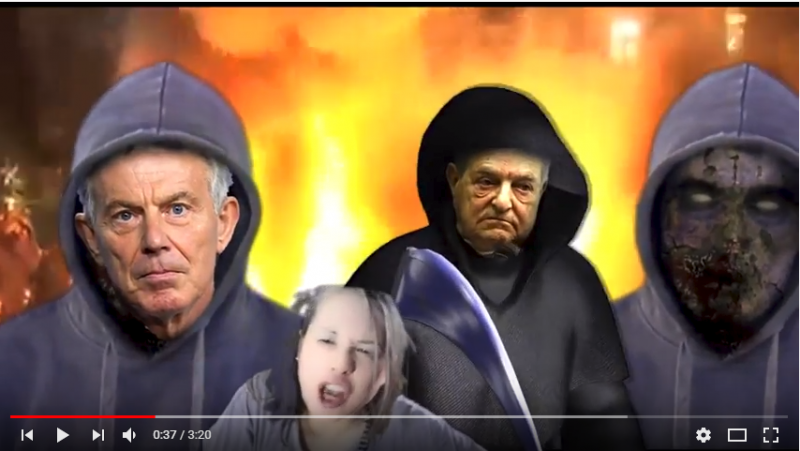 A UFO hovering over the 2011 royal wedding: 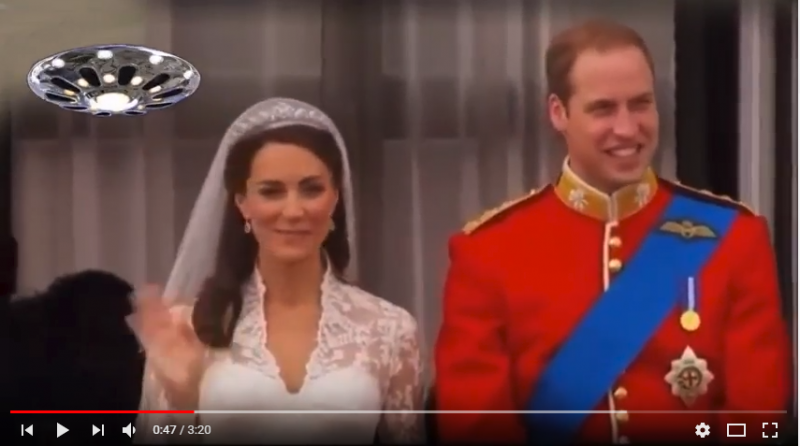 A UFO, still hovering over the 2018 royal wedding: 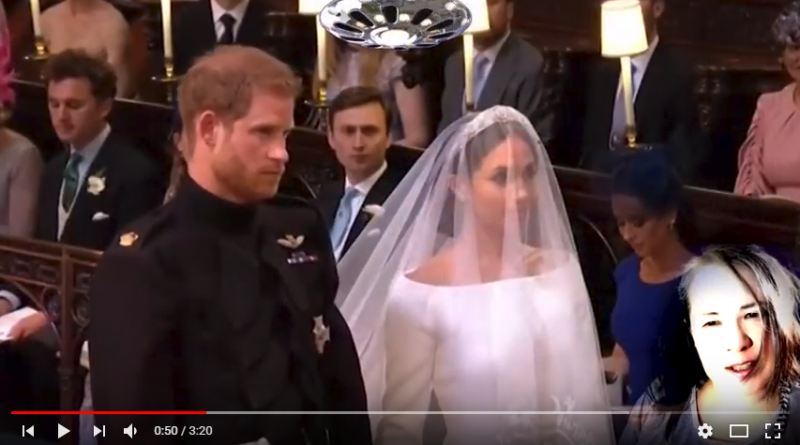 And, less than a minute into the video, the Queen is already being replaced by the mask of Tutankhamun while a UFO beams up the singer. 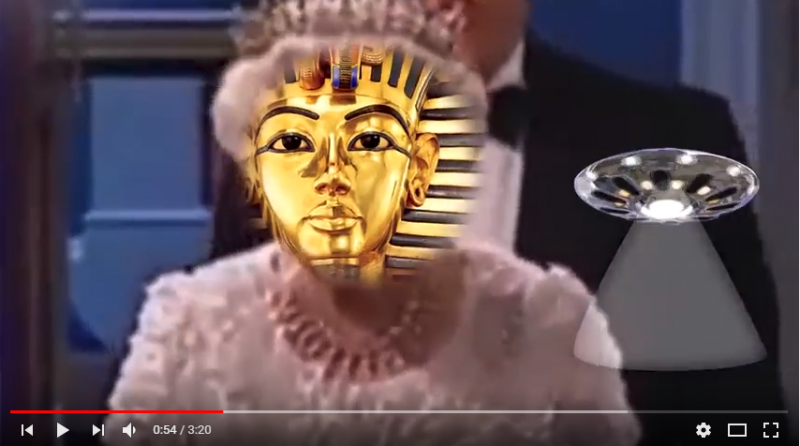 After this, a bunch of money literally flies away and lands on this cartoon runway labelled “tax haven”: 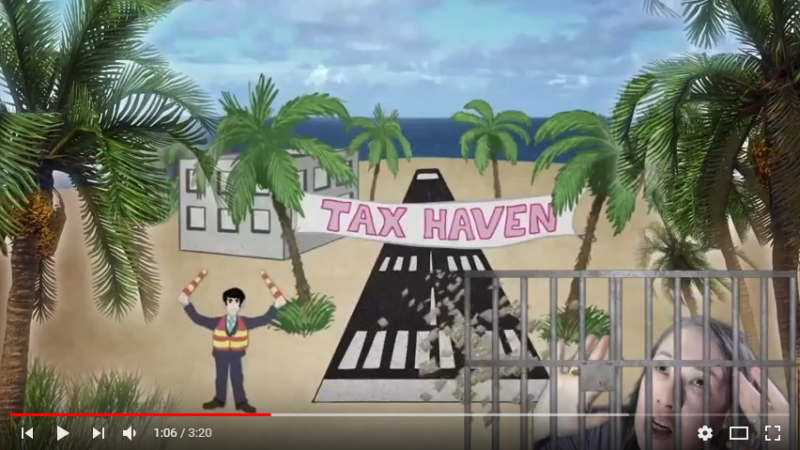 At this point, you’ll note, we are only a third of the way through the song. We haven’t even got to the bit with all the celebrity masks, that seems to suggest that Ant and Dec are in on the conspiracy, and which ends with a flying Jimmy Savile. 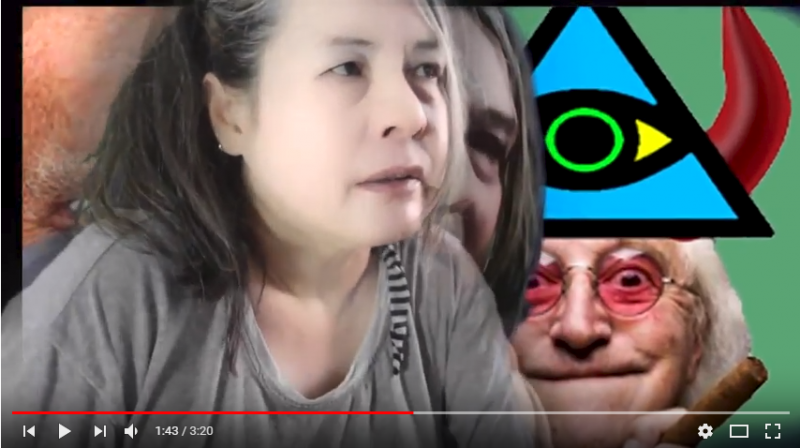 The Leavers have long been at pains to show that Brexit wasn’t all about a few ageing oddballs on the right-wing of the Conservative party – but I never realised that they wanted to make the church quite this broad.

It’s worth watching the video in full – partly because it’s amazing, and partly, honestly, because I’d love to know your thoughts. Chin’s other videos include a haiku called “Money is a church” (“it controls through fear”), and a masterpiece called “the United States of Europe” which despite not being a song, exactly, still manages to have a chorus that includes the words “Power fully centralised” repeated several times. Even so, I genuinely can’t work out whether this is real, or just a really long and involved piece of performance art. Either way I wouldn’t say that the people planning The Big Brexit Party come out of this looking good exactly, would you?