The news that a Chinese baby has been born four years after his parents died in a car crash has caused a media storm. The parents, Shen Jie and Liu Xi, had been trying to get pregnant, via in vitro fertilisation (IVF). Five days before their fertilised egg was meant to be implanted, they died in a car crash.

The couple left behind four frozen embryos. Their own parents, on both sides of the family, would go on to spend three years in China’s courts arguing that they should have rights to the embryos. They eventually won that battle. Surrogacy is illegal in China, so they transported the embryo to Laos, and found a surrogate there instead.

The baby, called Tiantian, is now 100 days old. The grandparents have since had to take DNA and blood tests to ensure their grandson gained Chinese citizenship.

While most headlines have focused on the spooky notion that dead people have had children, this concept itself is not so weird. Dead people, after all, have children all the time. Women in the UK who donate eggs hand over control of the future conception of a child to someone else. Moreover, the UK’s laws on IVF allow for the potential, if permission is explicitly obtained, for people to have babies after they have died.

The unusual aspect of Tiantian’s case is the fact the grandparents were able to claim rights to their embryos of their children. A similar case had been playing out in the UK in the last few years.

The case of Mr and Mrs M. vs the HFEA (Human Fertilisation and Embryology Authority) concluded in 2017. In the case, Mr and Mrs M requested that the HFEA give them the rights to their daughter’s frozen eggs. Their daughter had died five years earlier from bowel cancer, at the age of 28.

In the UK, when one freezes their eggs (unfertilised or fertilised), the HFEA requires that the woman or in the case of fertilised eggs, both partners, decide beforehand what should happen to the eggs in the case of mental capacity or death. 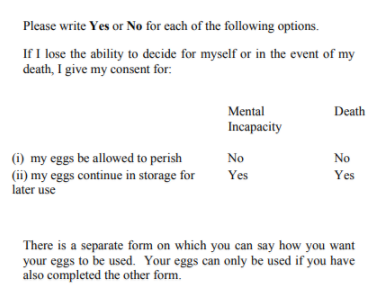 However, for some reason, the forms were not filled out properly. While the daughter said her eggs should continue to be stored postmortem, she did not specify what should happen to them. Her family claimed that the woman wanted her parents to raise any potential offspring. But there are no inheritance rights for embryos in the UK.

After two years of arguing back and forth, the case led to the courts overturning the HFEA’s decision, with the HFEA accepting there were “unique and exceptional circumstances”. Mr and Mrs M were able to take their daughter’s unfertilised eggs to America, for one to be fertilised by a sperm donor.

Speaking at the time to the BBC, the couple’s solicitor Natalie Gamble said that the case rested on the “most fundamental legal principles on assisted reproduction – that the person who has given eggs or sperm should decide what happens to them”. Mr and Mrs M remain anonymous, and whether they succeeded in their quest for a grandchild is unknown.

The difficulty in this topic is what happens when there isn’t written consent. Though these cases are few and far between, the rapidly improving technology and a lack of clear guidelines in storing eggs (worldwide) will only lead to more complications in both preserving the wishes of parents and ensuring rights aren’t trampled on.