It’s very “darkest timeline”. Ex-Disney star Jake Paul (brother of vlogger Logan Paul, who infamously filmed the dead body of a suicide victim) has created a 22-minute documentary about the Parkland school shooting in which he greets Florida senator Marco Rubio with the words “Hey, what’s up man?” and doesn’t mention gun control once.

Paul – who has previously made headlines for setting fire to a swimming pool – goes on to ask the politician: “I think like a lot of people think passing laws is super easy, can you explain some of the struggles around, uh, passing laws?”

It’s hard to not immediately balk at the documentary, which was released yesterday and has since been widely mocked by the press and individual journalists. Critics note that Paul doesn’t mention gun reform within the YouTube video, and many mock his conduct towards Rubio. Others accuse the video of being an insincere PR move, particularly as Paul has previously fetishised guns on his YouTube channel – and has a tattoo of a gun on his thigh.

after getting humiliated by teens on national tv, marco rubio is attempting to regain his dignity by speaking to jake paul on such topics as “a lot of people think passing laws is super easy, can you explain, like, some of the struggles around…. uhhm passing laws” pic.twitter.com/WjG6MjKPDe 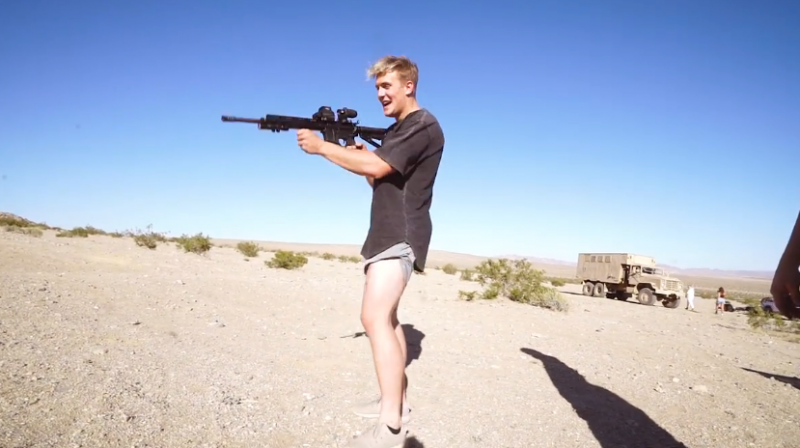 21-year-old Jake Paul talks and conducts himself like a child, which is what makes the video immediately jarring (“I just wanna become homies with them and just be there for them,” he says of the Parkland survivors he is about to meet). There is a vacant – almost dumb – expression on his face when he speaks with Rubio, leading the viewer to question just how much the YouTube star understands. But this is precisely the value of the video. Paul is a child talking to an audience of children – and talking to them on their terms.

YouTube doesn’t disclose the exact demographics of a YouTuber’s audience, but fan videos and Paul’s comment section reveal that most of his 14 million subscribers are young children and teens. Paul is introducing these children to a politician, and the video is edited so that Rubio’s claims don’t go unchecked – with footage of the senator being criticised by Parkland survivors playing in between shots of Paul and Rubio’s chat.

Paul (admittedly unintentionally) asks the senator questions a child might ask, such as “Is there anything that people can look forward to? Is there anything new that you’re working on?”. Although this might be jarring for adults to watch, the comment section of Paul’s video reveals it is already positively affecting his young audience.

“Definitely going to speak out now,” writes one. Another: “I shared this to my Mum and asked her to show the head teacher so everyone do that as well.” Childishness is still transparently at play – one commenter writes “Plzzz Stop the Guns… it hurts my feeling I’m crying… 1 like = 10 Pray to Florida” – but this too shows that Paul has introduced new concepts to kids previously more concerned with online pranks and viral fame.

Of course, it’s easy to see how this might be a cynical move on Paul’s part. Yet how can we demand more from YouTubers and then criticise them when they deliver it? Paul’s video is far from perfect, but engaging children in genuine discussions about current affairs is a commendable move, one far superior to his prior acts. (Paul previously caused controversy by telling a fan from Kazakhstan that he “sounds like you’re just going to blow someone up”, and his diss-track “It’s Everyday Bro” is third most disliked video on YouTube). Like it or not, Paul has an incredible influence over young people – at least he is finally using it for good.

Paul’s video has also undeniably helped at least one teen. “It’s just easier to talk about what’s going on with someone like you than a doctor or someone,” Jonathan Blank – a Parkland survivor – tells the YouTuber in the video. Later, his mother praises Paul through her tears. “It was the best therapy for my son,” she says, “You didn’t have an agenda, you cared.”

Other Parkland survivors are angry at the media’s response to the video. Kyle Kashuv – also interviewed in the documentary – has tweeted multiple times since the video’s release. “Media has the utter audacity to mock my classmates and Senator Rubio for doing the interview ON MY REQUEST AND THE REQUEST OF TWO OTHER STUDENTS,” he wrote.

“If you mock a video where my classmates, that witnessed their friends get murdered in cold blood, are crying and putting their hearts on their sleeve, be prepared to be hit back twice as hard.”

Kashuv differs from the most famous group of Parkland survivors, as the teen supports the STOP School Violence Act over national gun reform. Yet the teen’s politics do not make his thoughts or feelings less valid, or his voice less important in the conversation. While critics note Paul spoke little of gun reform in his video (instead he suggested that schools have bullet proof glass and Instagram should flag pro-gun posts), the YouTuber later tweeted to clarify his stance.

“Gun Reform changes we need in my opinion,” he wrote. Paul went on to suggest that anyone who wants to buy a gun should be 21, go through a six month training course, and have a mental health evaluation. He also tweeted that gun shows should be banned and there should be a “30 day wait period after purchase to receive firearm”.

Gun Reform changes we need in my opinion.

This isn’t to say, of course, that Paul is right, or has all the answers, or is even equipped to discuss this topic sensitively. Yet his promise to pay for busses to the March for Our Lives demonstration in Washington DC, alongside the fact he didn’t monetise his YouTube documentary, speak of someone at least trying to do some good. “We all want the same thing and that’s to make schools safe,” he says in the video. Although he gives Rubio and the STOP School Violence Act a platform, he is dismissive of their impact.

“Kind of why I wanted to make this video in the first place is to activate parents and kids within their own schools and communities, that’s the way things are going to get done the fastest. We don’t to wait for hundreds of people in Washington DC to pass the laws,” he says.

Though the description to Paul’s video was most likely written by a far-more savvy PR, it’s hard to disagree with. “I vow to be part of the solution and utilise my platform to raise awareness and action across the board, but we cannot focus on one issue, we must actively discuss and make progress on them all,” it reads.

The criticism of Paul smacks of the old media sneering at the new media, galled and appalled that a 21-year-old YouTuber would dare wade into politics and do so less than perfectly. Concerns about propriety and morality are a veil to disguise a pervasive distaste for YouTube stars. Criticisms that his suggested solutions are stupid ignore the fact that it’s not his job to reform society. It’s like having a go at Sesame Street for not criticising Theresa May.

YouTubers might not be the idols that adults wish teenagers had, but we can’t change that. What we can do is encourage viral stars to engage with important issues, and not mock them when they do so less than brilliantly. Jake Paul may not be a good person – it might even be a stretch to describe the video as “good”. But the YouTuber made an effort that should be commended, not mocked.