It wouldn’t be surprising if seven-day old Stormi had an Instagram account. As the newest member of reality TV’s most famous family, the fact she’s a baby should be no barrier to Stormi’s social media success. When her mother Kylie Jenner posted a picture of the new-born to the site yesterday, it took just a few hours before it became Instagram’s most-liked post ever.

@stormijenner is just one of many seemingly-fake Stormis that have popped up on Instagram since Kylie Jenner announced the birth of her daughter earlier this week. With over 75,000 followers, @stormijenner follows Jenner and Stormi’s father, Travis Scott, and has reposted the picture of Stormi from Jenner’s account. Yet Scott and Jenner don’t follow this page, and haven’t promoted it on their own profiles. There is no evidence it belongs to Kylie Jenner, and the profile picture is a picture of a baby that first appeared on a website called babies.blogcrib.com on 23 December 2017. 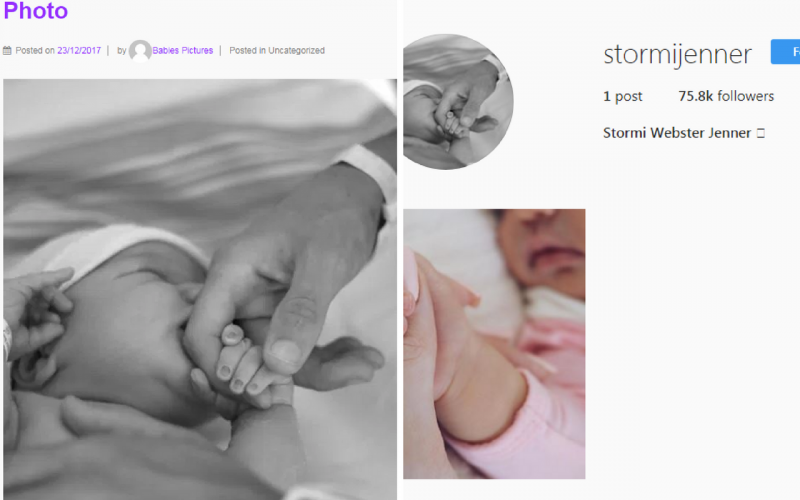 So how did this account get 75,000 followers in just a few days? Other fake Stormi Jenners – from @stormijenner01 to @stormijenner.now – have managed anything from between 700 and 14,000 followers. Of course @stormijenner benefits from the handle directly being the baby’s first name and her mother’s last name (although celebrity sites suggest Stormi’s surname will be Webster, after Scott’s real surname) but just where did all its followers come from?

Last summer, the New Statesman spoke with people who’d had their pictures stolen by an Instagram account known as @transformationfeed. These photos were stolen and doctored to appear as inspirational “before and after” pictures on this account, as well as accounts titled @course and @relationships.usa. These accounts gained a large number of followers from the pictures, meaning they could then earn money by advertising products, such as jewellery, on the pages.

@course is the source of @stormijenner’s fans. The account posted two pictures of Stormi this week, and in each included the handle @stormijenner in the caption. The account was therefore actively and purposefully directing its four million followers to the page. Similarly, earlier this month @course claimed to have found the Instagram page of the “Selfie Kid”, a boy who became a meme after posing with Justin Timberlake at the Super Bowl. This account now has 117,000 followers, but there is no evidence it is run by the real Selfie Kid, 13-year-old Ryan McKenna. 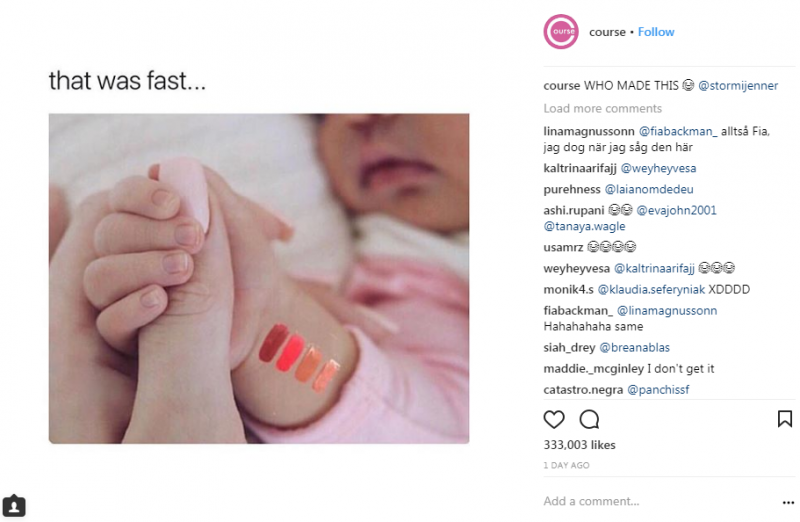 Last year, Buzzfeed News found that an 18-year-old boy called Hasan ran the @course account. Hasan did not respond to my request for comment from his @course or @hasan accounts, and it is unclear whether he created @stormijenner, was paid to promote the account by someone else, or believes it to be real.

@stormijnnr is an Instagram user claiming that they originally owned the @stormijenner account and gave the password to @course. They say @course claimed they would help them build up the number of posts on the profile, but then changed the password and “stole” the account. 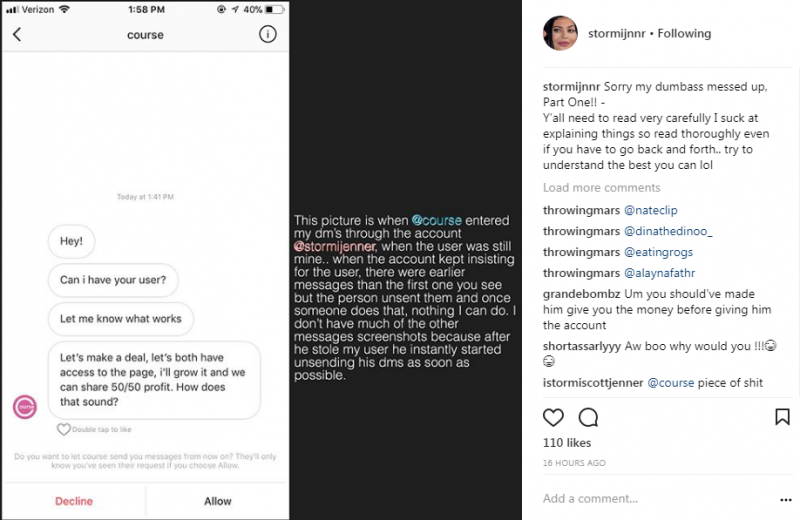 @relationshipsfeed.usa – one of the accounts Hasan told Buzzfeed worked in allegiance with his account @course – is commenting on these posts, calling @course’s actions “a whole scam”.

On another Instagram profile, @exposingdiary, someone has dedicated the last day to proving @stormijenner is fake.

“Course denies that he owns that account and kylie does but kylie jenner doesn’t even follow the page, so basically he cares about followers and money, as you can see the proof,” they captioned screenshots of conversations between @course and the alleged original owner of @stormijenner. In some screenshots, an account named @journal claims to have paid $40 for the @stormijenner account. (@journal’s contact email is the same as @course’s, and @exposingdiary speculates that Hasan runs the account).

No one behind any of these accounts responded to request for comment, but the drama continues online. Who stole @stormijenner? Who is @stormijenner? Regardless, it seems unlikely that the page belongs to any real member of the Kardashian Klan.

It is an unusual state of affairs that when a baby is born, people will try and steal its identity for social media fame. This fame often directly translates into money, as a large number of followers means accounts can be paid to promote products. Whoever does own @stormijenner will be able to profit from its 75,000 followers greatly, which explains why so many online are arguing about the profile’s ownership, and why people would be willing to steal (or pay $40 to get) the account.

Another fake Stormi, with over 100,000 followers, is using the same stolen image of the baby from the blog. @istormiwebjenner has a bio full of emojis, but “No Posts Yet”. Their bio reads, in the voice of the new-born: “Daughter of Kylie Jenner. Going live in 10 minutes with my mommy follow to join”. This tantalising offer of proof is yet to materialise into concrete evidence.

At least it won’t be surprising if eight-day old Stormi gets a verified Instagram account very soon, exposing the fakes for that they are.