In the final hours of 2017, Chrissy Teigen and John Legend were forced to deny accusations that they were part of an elite paedophile ring. The American model and her musician husband responded to tweets by Liz Crokin, a right-wing conspiracy theorist, who had collated pictures of the couple’s daughter dressed as Alice in Wonderland and a hot dog. This, alongside the fact the couple have previously been pictured with Hillary Clinton and Harvey Weinstein, prompted Crokin to tweet that the pair “run in circle with people who rape, torture & traffic kids”. 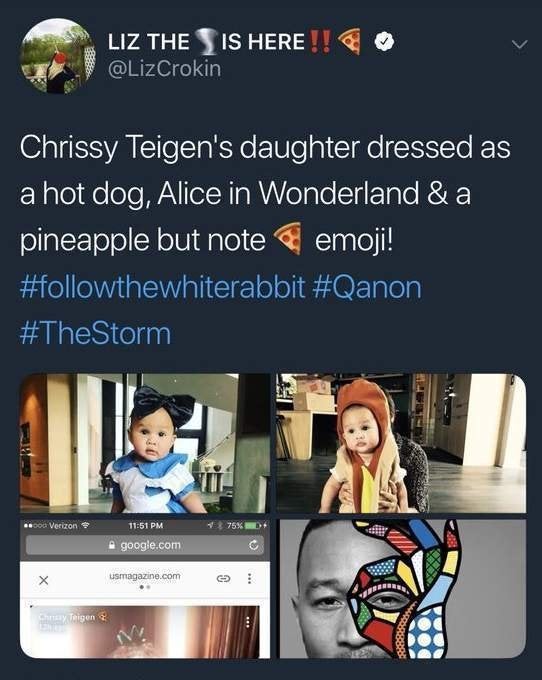 If you are confused as to how pictures of a child dressed as a storybook character and a sausage are evidence of paedophilia, you are probably not alone. In 2016, a conspiracy theory that emerged on the controversial – and notably far-right – forum 4Chan went mainstream. “Pizzagate” was the name given to the theory that members of the Democratic Party (most prominently Hillary Clinton and her campaign manager, John Podesta) ran a paedophile ring and engaged in satanic rituals. 4Channers alleged that a Washington DC pizzeria, Comet Ping Pong, was at the centre of the ring and that “cheese pizza” was a code for child porn while “hotdog” was a paedophile code word for “boy” (never mind that it was Teigen and Legend’s daughter dressed as the food item).

Many think Pizzagate ended when the internet’s most famous conspiracy theorist, Alex Jones, apologised for promoting the story a few months after a gunman fired shots inside Comet Ping Pong. In actual fact, the Pizzagate theory has grown exponentially in the last year, expanding into a whole host of accusations known as “#Pedogate”. The hashtag #FollowTheWhiteRabbit collates conspiracy theories surrounding many in the Democratic party, as well as liberal celebrities (and goes some way to explaining why an Alice in Wonderland costume is seen as suspicious). The Daily Dot notes that most who use this hashtag are pro-Trump in their Twitter handles and bios.

Once someone is a target of those who “follow the White Rabbit” (i.e. go down a rabbit hole into perceived truths), it is remarkably easy for theorists to find “evidence” of their crimes. Crokin, for example, points out that Teigen once made a joke about witchcraft in a magazine. Anderson Cooper, an anchor at one of Trump’s most hated news sources, CNN, was pictured with a cut-out of child star Honey Boo Boo and once posted an Instagram of a gruesome looking teddy bear, so he is clearly “shopping for trafficked children to rape”. Other hashtags that collate this “evidence” include #QAnon (the nickname of a 4Channer who claims to have insider information and posts mysterious questions on the site) and #TheStorm (the idea that a storm of accusations and arrests is incoming).

These theories notably target high-profile figures who are anti-Trump (Teigen was blocked by the president on Twitter in July). In December, actor Tom Hanks expressed – for the first time – “concerns” about Trump’s presidency. A day short of a month later, Crokin shared a tweet about Hanks “listening to people’s cell phone conversations” with a cell phone scanner, adding her own hashtags – #Qanon #followthewhiterabbit #TheStorm – to the tweet. 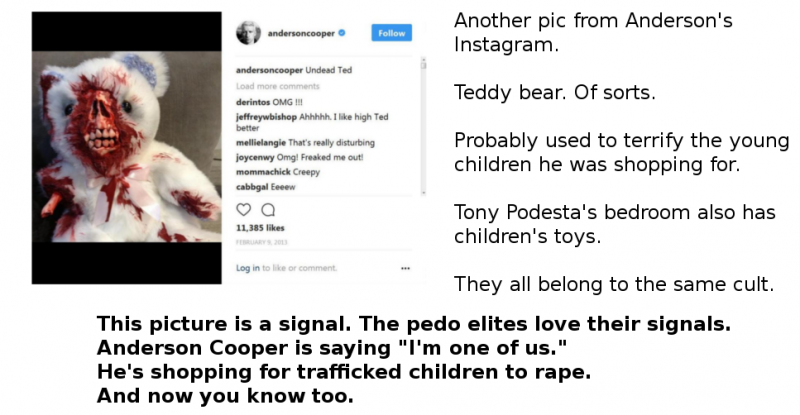 It is worth noting that many who spread these theories ardently believe them, with some – including Crokin – stating they themselves were victims of child sexual abuse. Some of these conspiracy theorists are clearly trying to fight for the safety of children, and have had some success (in November 2016, #Twittergate exposed accounts sharing child pornography on Twitter). Yet Crokin is a staunch defender of Roy Moore, the Republican who was accused of sexual misconduct by nine women in November 2017, one of whom was allegedly 14 years old at the time of the incident. It is clear, therefore, that online paedophilia accusations are often politically opportunistic.

The most infamous incident of a weaponised paedophilia accusation came when Mike Cernovich, a prominent alt-right social media personality, accused comedian Vic Berger of being at the centre of a paedophile ring. Cernovich and Berger had argued after the latter mocked him in a video, which resulted in Berger’s fans trolling Cernovich. Two of these fans sent Cernovich disturbing messages about his baby – Cernovich then extrapolated that because Berger had interacted with these fans on Twitter a handful of times before, he was friends with paedophiles. Berger received death threats.

Cernovich repeatedly uses accusations of paedophilia to smear the left-wing. When students at Columbia University protested the alt-right personality coming to their campus, a fake banner was planted. The protest sign read “No Mike Cernovich” and also “No pedo bashing”, and featured a logo for the “North American Man/Boy Love Association” (NAMBLA). Conspiracy theorist Paul Joseph Watson – who has been described by many as alt-right, but denies this affiliation in his Twitter bio – tweeted the picture, meaning a lie that the left-wing openly support paedophiles spread. A day later, the person who originally tweeted the photograph revealed it was right-wing counter-protesters who had planted the banner. 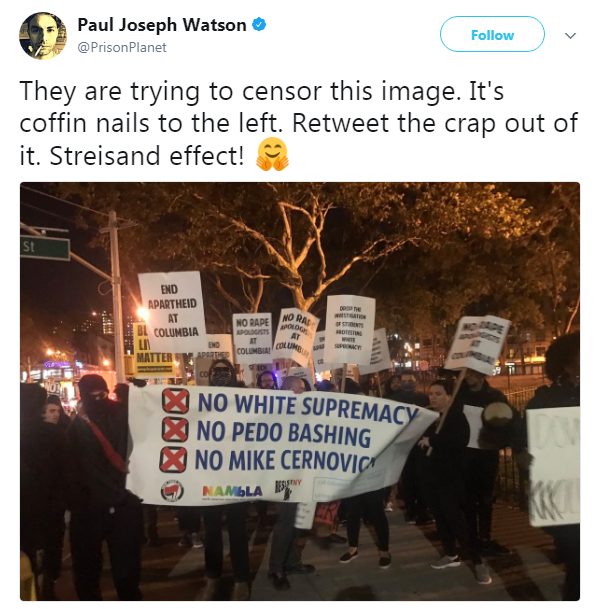 Robert Bartholomew, a sociologist and author of Hoaxes, Myths and Manias: Why We Need Critical Thinking tells me why accusations of paedophilia are weaponised in this way – and how they spread so far. “It’s is a powerful weapon to use against one’s political enemies because, regardless of the motivations of the accusers, the accusation alone can be enough to permanently ruin someone’s reputation,” he says. “People like John Legend and Chrissy Teigen are natural targets because they are high profile celebrities who are liberal, elite, and outspoken in their support of gender equality – like letting their daughter cross-dress and play with toys that would be considered traditionally male.”

Bartholomew says that undoubtedly many on the far-right do believe the sexual abuse claims against Legend, Teigen, and others, but this can be unconsciously politically motivated because it confirms their worldviews. In November, Legend spoke out against gender stereotyping in children’s toys and films. “This would make many on the alt-right feel nervous, if not outraged,” says Bartholomew, “I have no doubt that some ultra-conservatives actually believe the sexual abuse claims because they view what Legend and Teigen are doing as abusive and harmful and they read into things that aren’t there.

Once a person begins to believe these theories, Bartholomew explains that human psychology means they seek out more information to fit their preconceived worldview. While this sort of moral panic has always happened – Bartholomew cites the Communist Scare and the Lavender Scare (the witch hunt of gay men and lesbians in government positions) in the 1950s – he notes that these modern panics are even “more dangerous”.

“We live in a global village with the advent of social media and instant communication.  It’s easy to make claims.  Anyone can do it.”

The number of people who have had their lives turned upside down by these accusations grows every day. One individual shares with me their experiences of being attacked online – they wish to remain anonymous so that their name appearing in the press does not provoke further attacks.

“Through an email I sent to a personal friend that was released by Wikileaks, I found myself viciously attacked by many hundreds of utter strangers via every form of communication including email, phone calls, Twitter and Facebook,” they say.

“The accusation, apparently shared with those in what I would call the ‘Hate-o-sphere’, was a total fiction and not even close to what I wrote in my leaked email. To my horror, this invented ‘report’ about me caused people (or bots?) who don’t know me to barrage me with attacks that were often vulgar, hateful, and life-threatening.

“I still wonder why do so many people attack someone they don’t know and do they have any idea they are aiding and abetting in spreading a lie, not to mention causing the recipients, me and my family, mental duress and even physical fear.”

In November, Newsweek journalist Alexander Nazaryan asked Mike Cernovich why he frequently leveraged pedophilia accusations. In an email reply, Cernovich wrote: “My belief that the left is full of pedophiles is every bit as sincere – and more supported by evidence – as the left’s belief that Trump supporters are Nazis… When people view us as evil demons, how can they be surprised when we see the worst in them, and view them as being defined by the worst acts of their members?”

It’s a self-reportedly noble motivation, and anyone who claims to be standing up against pedophilia can easily paint themselves as in the right. Yet clearly, spreading accusations of paedophilia against political opponents is not an altruistic act. But regardless of how ridiculous these accusations get –“evidence” against Teigen includes that she once used a pizza emoji alongside a picture of her daughter – they are incredibly damaging and distressing for the accused and their reputations.

Legend has it that Lyndon B. Johnson, the 36th president of the United States, once argued with an aide about what he could and couldn’t say about his political opponent. When the aide protested that the president’s accusations weren’t based in truth, he came up with a legendary, but apocryphal, retort.

“Of course it ain’t true – but I want to make the son-of-a-bitch deny it.”