“I’m not wearing technology – I am technology,” says Neil Harbisson, an interdisciplinary artist who is the world’s first being to be legally recognised as a cyborg.

Why? Harbisson has an antenna implanted into the back of his skull, which has “osseointegrate” into his nervous system and skeleton – attached to it is a webcam, which transposes the light frequencies of colour into his skull as vibrations, each of which produces a distinct musical note.

Harbisson is one of the subjects of David Vintiner and Gem Fletcher’s photo series Transhuman, featuring people around the world who use technology to transcend the limitations of the human body. 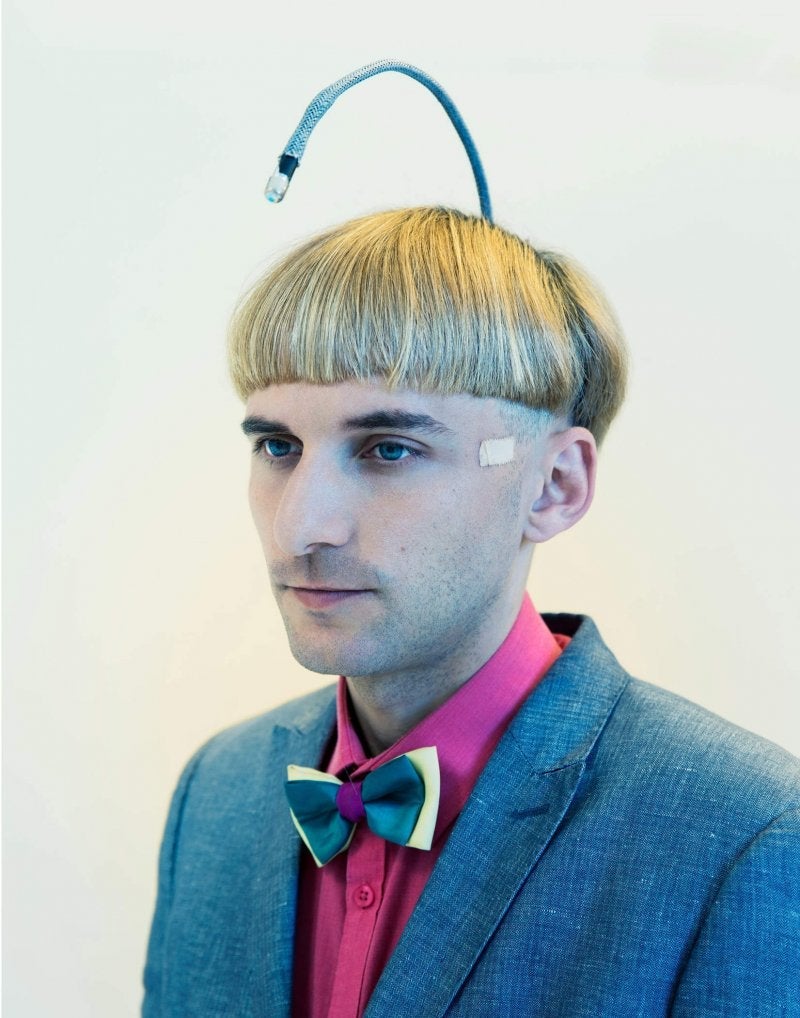 Subjects range from Anders Sandberg, a professor at Oxford University involved in the Future of Humanity Institute, to Rob Spence, who lost one eye when he was younger and had a camera implanted in its place.

The term “transhumanism” is difficult to define; broadly speaking, it looks into changing and transcending human limitations using science and technology. Proponents of a certain kind of transhumanism involve Silicon Valley billionaires like Elon Musk and Peter Thiel.

But it also encompasses body hacking; the creation of new abilities or the enhancement of existing ones by modifying the body. Biohackers are not a uniform community, and some who have carried out the most unique body interventions reject the label altogether (Harbisson considers himself “transpecies”, and prefers the term “mind hacker”).

For the body hackers who feature in Vintiner and Fletcher’s work, the label of transhuman is contentious. “What they do all agree on is this embrace of technology to extend what the human is capable of doing – either to improve on something the body already does, or expand the sphere of perception,” says Vintiner. “But there’s not really one uniform understanding of what it is to be transhuman.”

Vintiner and Fletcher wanted to avoid depicting their photographic subjects as something to be gawked at. Over the phone, Vintiner says: “We definitely wanted to avoid sensationalising them. We shot many of them in domestic settings. Even though they’re dealing with these huge, futuristic ideas, some of what they’re doing has these very real, practical applications.”

One of those people for whom body hacking was initially medical, rather than artistic, is James Young. He lost his left arm and lower left leg in a train accident when he was sixteen; the chance discovery of a prosthetics leaflet years later gave him a unique opportunity to try a pioneering prosthetic. 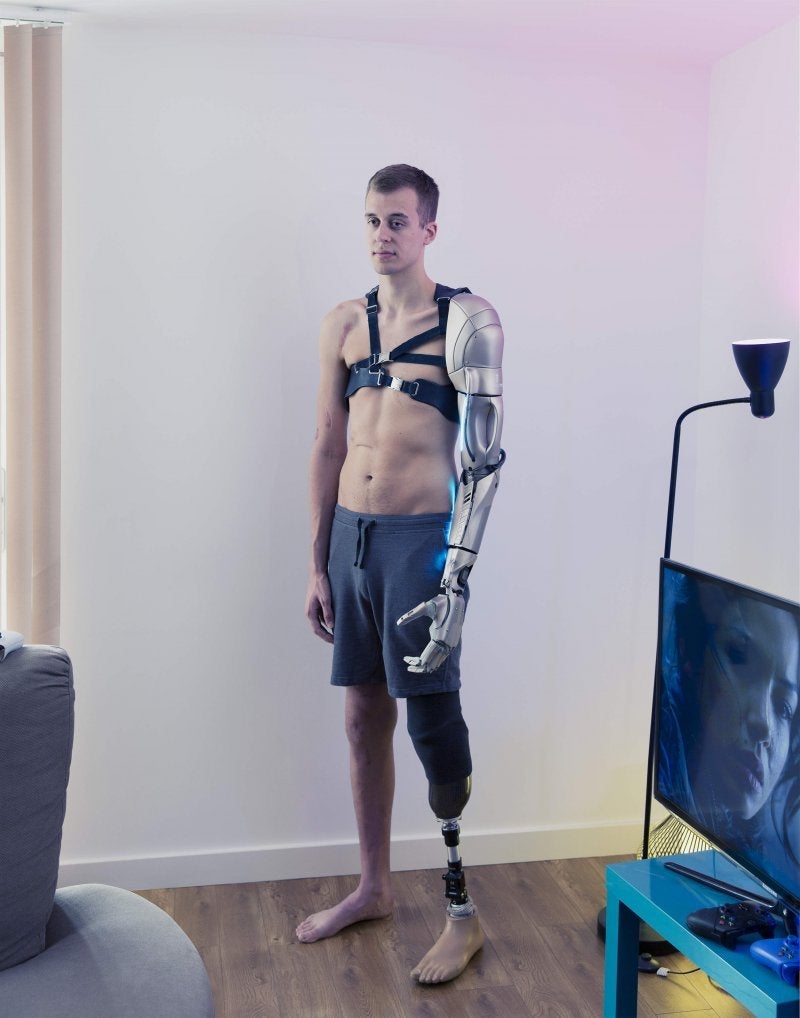 “This company was looking for an amputee gamer, so I was selected fairly quickly. It (the arm) was funded by Konami, a gaming company, and the Alternative Limb project,” says Young over the phone.

“We ended up with all of these extra things – a smart watch integration, solar power – that made it possible for me to have extra human abilities”. The arm itself is a thing of beauty; however, Young says it’s unwieldy and there are several issues, such as hygiene concerns, which limit its functionality.

Young admits to having a different relationship with his body modification than some of the other kinds of body hackers. “Right now, I am literally an amputee. Technology has always been used to create tools for humans – so I actually think integrating technology into our bodies is a very, very human endeavour.”

When I ask him about further potential body modification, Young laughs and says, “I really don’t want to be fucking around with my body any more.”

Harbisson admits he’s faced opposition from medical to religious communities. He has been accused of playing God. “I think we’re playing with God, it’s collaborative. We’re using technology to perceive more of nature.”

As for the do it yourself element, biohackers are the first community to try and actually make transhumanist ideas – transcending the limitations of the human body – a reality.

“Many transhumanists have always been of the belief that augmentation is going to come in a nice package, it’ll be well put together and it’s going to be on the NHS and all that,” says Luke Mason, Director of Virtual Futures, and a prominent figure on the London transhumanist scene.  “In reality, we need to test some of it on humans, and inevitably, we’ll make mistakes.” 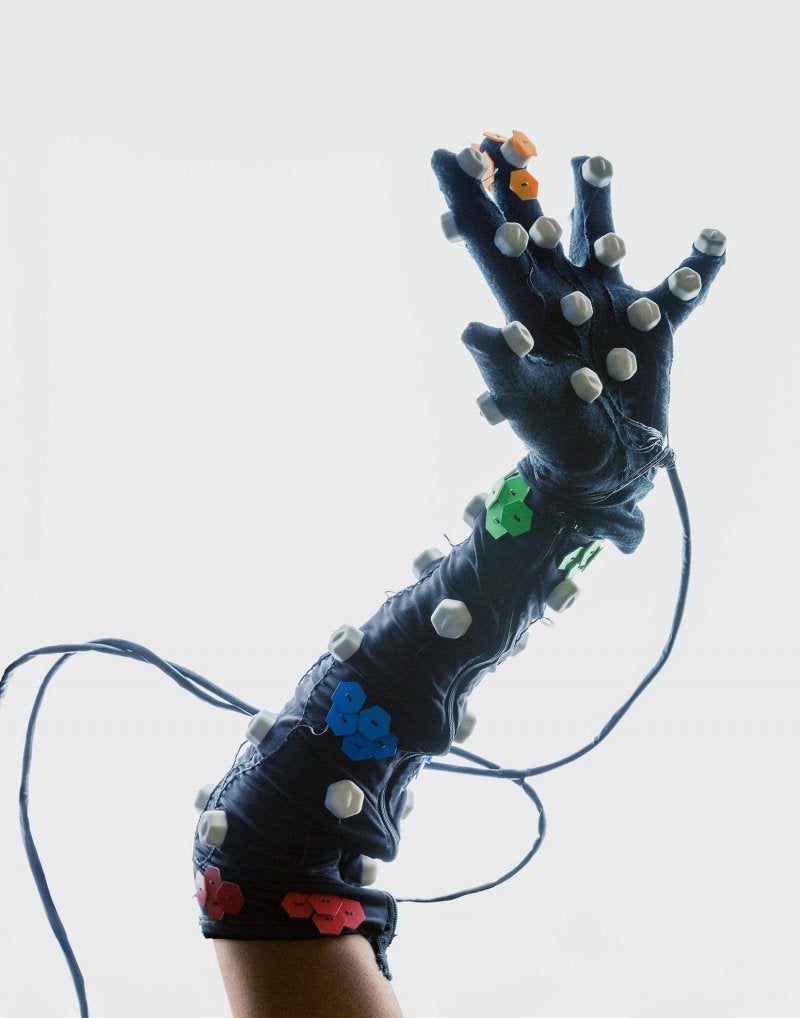 Depending on how you view transhumanism, the idea that body modification – such as an implant that lets you find magnetic north – could be available on the NHS is a strange one. But almost everyone I speak to agrees that these trends are just the beginning.

The overwhelming theme that emerges is that these initial modifications – microchips that let you sense seismic activity on the moon, additional organs that help you create new senses – are just the beginning for both biohackers and for the rest of society.

“It’s like getting a tattoo,” says Harbisson. “Look at how many people are now tattooing themselves in 2017, and compare that to the people getting tattooed in 1987.”

Despite Young’s assertion that integrating technology into our bodies is very human, there could be a change in what we call a human being. “Everyone will have different senses and organs and modifications, depending on what they want,” says Harbisson. “What we call diversity now – it will be nothing compared to what we call diversity in the future.”

All photographs of  David Vintiner and Gem Fletcher.

Sanjana Varghese was formerly a Wellcome scholar at the New Statesman.