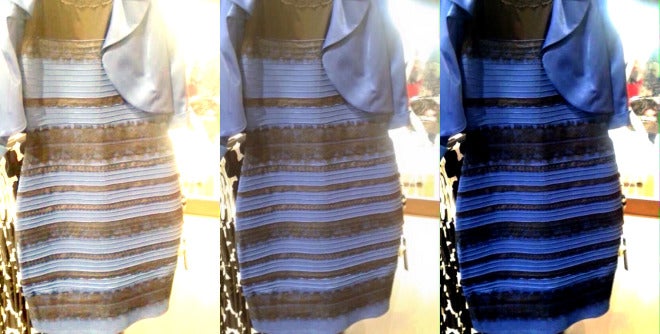 The infamous dress, in all its variety. Photo: swiked/Tumblr

The internet went Armageddon last night over the colour of an (let’s face it) ugly dress which Tumblr user swiked uploaded. The disagreement in colours divided the social media world: is it blue and black or white and gold or something in between? 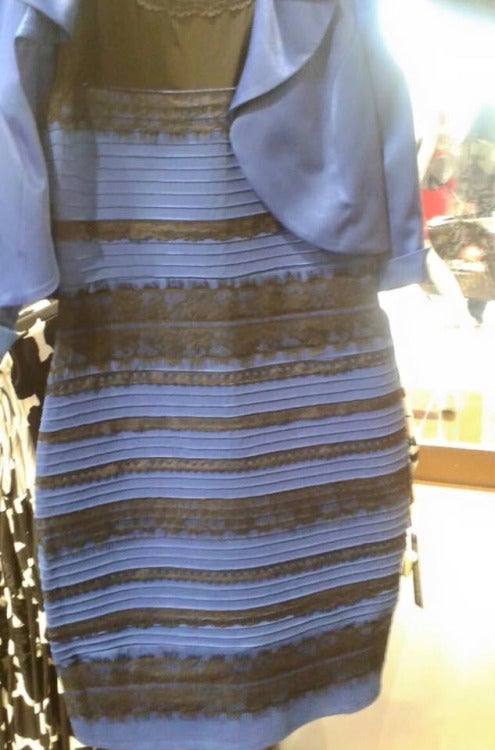 (By the way, it’s clearly blue and black.)

When things start to question our existence we turn to science to tell us things are going to be ok. Let’s turn to how our brains translate colour through our retinas:

Visible light can be broken down into various wavelengths which correspond to different perceivable colours. This all depends on what colour(s) the object is reflecting. This reflective light enters through the eye lens and hits a light sensitive layer of tissue called retina in the back of the eye where a cascade of neural messages are sent to the visual cortex – the part of the brain that processes visual information. However, the quality of light that penetrates into our retina plays a big part.

Luminance is the intensity of light emitted from a surface per unit area of light travelling in a given direction. So the brain has to work out how much of the luminance (or lack thereof) is caused by the colour of the square and how much is caused by the shadows. “In the case of the dress, some people are deciding that there is a fair amount of illumination on a blue and black (or less reflective) dress. Other people are deciding that it is less illumination on a white and gold dress (it is in shadow, but more reflective),” said Cedar Riener, an associate professor of psychology at Randolph-Macon College in a BuzzFeed interview.

An example is the famous Adelson checkerboard optical illusion, in which square A and square B are same shade of grey:

So why do different people’s brains interpret light differently? Humans have evolved to see in the daylight. Typical daylight extends from blue-white at noon to pinkish-red at dawn. Bevil Conway, a neuroscientist who studies colour at vision at Wellesley College told Wired: “What’s happening here is your visual system is looking at this thing, and you’re trying to discount the chromatic bias of the daylight axis. So people either discount the blue side, in which case they end up seeing white and gold, or discount the gold side, in which case they end up with blue and black.”

Based on correct white-balancing, we can confirm that the dress is blue and black (sorry white and gold die-hards), but ultimately, visual perception is in the eye of the brain holder.

Luckily for the New Statesman, Ed Miliband established Labour’s position on the blue-black and white-gold spectrum: