Sometimes, it’s possible to take a joke too far. This tweet has inspired just such an occasion: 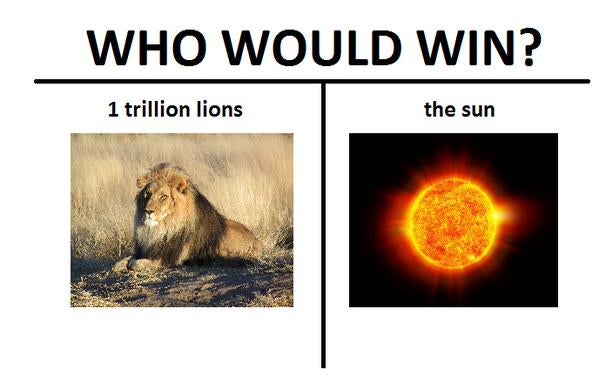 The answer to this question is: the Sun. But! There are other things we can do with a trillion lions.

First, we need to work out exactly how much lion we’ll have if we have a trillion lions. This paper found that the average adult male Panthera leo living in Kruger National Park in South Africa weighs 187.5kg, and so a trillion lions means we’re talking about a sphere of lions with a total mass of 1.875 x 1014kg. To put it into context, that’s about 20 times more massive than comet 67-P (which the Rosetta probe and Philae lander have been studying since late last year) – but it’s nothing on the mass of the Sun: 1.98892 x 1030kg.

You might think that lions have advantages over the Sun (claws, for example) that level the playing field. It’s not enough. A comet-sized object consisting of lions held together by gravity and floating in towards the Sun to attack it will not destroy it – the Sun will destroy them. The Sun is a trillion times more massive than the spacelionball. It’s sad, but true.

But if we’re going to go to the trouble of launching that number of lions into space, we should, I would argue, use them for something more productive.

Working out the size of the spherical spacelionball isn’t that difficult if we assume each lion ends up as its own little sphere of meat (and considering the effects of the vacuum of space on otherwise-unprotected lions, yeah, they’ll be meat soon enough). We know the mass of each individual lion sphere, but we also need to know its likely volume if we’re to explore the consequences of a spacelionball – and, funnily enough, a search through the scientific literature comes up empty-handed for studies where scientists have gone to the effort of dunking lions in water and measuring how much water was displaced.

However, there’s one group of people who do need to know how dense meat is: farmers. This company makes buckets for agricultural elevators, and provides a handy engineering sheet with the average densities of the kinds of things farmers tend to stick in buckets. Their value for the density of “meat, scrap with bone” is 40 pounds per cubic foot, or 640.7kg per cubic metre – and again, bearing in mind what the radiation and cold of space does to exposed flesh, “meat, scrap with bone” is probably close to the final product.

And, assuming meat’s similar enough from species to species that this density value doesn’t change much, that means our meaty lion spheres are going to take up 0.29m3 each. Think of it this way: you’d need to put two lions through a wood chipper to fill up a typical bathtub. (Note: don’t do that.)

That’s all very grim, but it does mean that our spacelionball will be a sphere with a rather neat volume of 290km3 and a diameter of just over 8km. Its circumference is roughly 26km, which isn’t too far off the length of the main loop of the Large Hadron Collider, and an astronaut standing on the surface would experience gravity that felt about a twentieth as strong as Earth’s. Like other objects of a similar size, our spacelionball will be very loosely held together, and the escape velocity is extremely low – anything moving faster than the speed at which grass grows will be ejected into space. As meat in the interior decompose, the release of trapped gasses will mean some lions get gently pushed out into space.

The spacelionball’s closest relative in the Solar System in size and mass is probably Jupiter’s small, strange moon Themisto, about which we know very little, beyond the fact that it orbits apart from the other groups that Jupiter’s moons tend to clump into. Astronomers found it in 1975, then lost it, then rediscovered it in 2000; we still don’t have any photos of it, so it’s fair to say that we can’t definitively rule out the possibility that it is, in fact, composed of a trillion lions bound together by gravity. It probably isn’t, but we can’t be sure it isn’t.

Leaving our spacelionball to coalesce and cool and congeal, to hang in the heavens without purpose, would be a waste. Like humans, lions are mostly water, and our ghastly cosmic creation would be be roughly two-thirds H2O, an amount the corresponds to about 254 times the daily discharge of the Nile – and if we crash our spacelionballcometthing into something we might, after the dust settles, be able to make use of it.

One of the more ambitious suggestions for making Mars habitable to Earth life is to commandeer and crash comets into it, thereby: a) thickening its thin atmosphere with necessary gases like oxygen, carbon dioxide and nitrogen, and b) warming up the polar regions, where more than enough water ice is currently stored that, once melted, would create oceans and river just like ours. Our spacelionball is far too small for this – we’d need several hundred of them at least, if not more – but we could try something else.

Without getting into too much detail (though it’s here if you want it), Mars is short about 1019kg of atmosphere, and in the Kuiper belt contains a bunch of huge asteroids which weigh in at about that mass – and, crucially, they’re rich in compounds like methane and ammonia, which we’ll need to make Mars fertile. The force required to move one of these objects out of its orbit and in towards the Sun, and into a collision course with Mars, is huge, on the scale of dozens of nuclear warheads. But an easy way to halve your energy costs is to simply find a smaller asteroid travelling retrograde (ie, backwards relative to most other objects) around the Sun, and maneouvre that into colliding with the larger thing you’re really hunting.

The resulting impact, as the combined lion-and-Kuiper object reached its target, would very rapidly reshape the Red Planet into something more similar to Earth, once the hydrological cycle settles in and the atmosphere is rebuilt to a surface pressure comparable to Earth’s. There would be side effects, true, including the violent ejection of rocks and debris from the impact site back into space, and likely towards Earth – we have many meteors that we know used to be part of Mars, delivered to us by similar ancient collision events. Only for this one, some lions might make it home on the return journey.

In this way, the sacrifice of so many kings of the jungle may not be in vain.

With apologies to Randall Munroe.