Looking back at the Space Race of the 1950s and 1960s it can be startling to realise just how much was pioneered in such a short period of time. The narrative of that era is often constructed as a political one, with two superpowers spending significant proportions of their national budgets on scientific endeavour in an effort to be the first to reach the Moon. This is fine, and true, but with the passing of time it feels as if that story we tell – one of the Soviet Union reaching space first with Sputnik and Yuri Gagarin, but the United States coming from behind to triumph with Apollo 11 – implicitly downplays the fact that both “sides” involved were responsible for some astonishing scientific advances and breakthroughs, both before Neil Armstrong’s first lunar step and after.

Here’s just one of them, in full colour – the first ever spacewalk, by fighter pilot and cosmonaut Alexey Leonov:

For 12 minutes, Leonov floated around on the end of a 5.35m-long steel tether. His spacesuit ballooned hugely in the vacuum of space, and he became wedged in the hatch opening of his spacecraft, Voskhod 2, when he tried to re-enter. He had to slowly release air from inside his suit, and wait to see if it would deflate enough for him to squeeze through without the air pressure dropping so much that he would pass out. It must have been terrifying – an experience almost on a par with that of Italian astronaut Luca Parmitano, who almost drowned from a leak of water inside his helmet.

Here’s an English translation of the narration in that clip:

Man continues to assimilate (or make his own) [indecipherable]. In the Soviet Union, for the first time in history, man has performed a spacewalk. This is genuine documentary footage, filmed on March 18 1965 by an automatic film camera mounted on the outside of the Voskhod-2 spacecraft, piloted by [Pavel Ivanovich] Belyaev. Aleksei Leonov leaves the spacecraft – a man in outer space! He lives, he works, he smiles, and this means that people can repair spacecraft, build and maintain space stations, transfer from rocket to rocket, get out of [difficult? not clear] situations. A bold and important step has been taken on our journey to the moon, and it was achieved by a Soviet [indecipherable].”

(And many thanks to Ben Phillips (@BenPhillips1989) and Elizabeth Harrison (@CorArdens) for answering my call on Twitter for Russian speakers to translate it.)

As a historical artefact, that clip of Leonov is striking – the framerate makes his actions seem jerky, the way he floats almost as if an actor on strings. It’s literally surreal, a real event with the qualities of a dream, and the time when Leonov made his spacewalk was a time characterised by some rather intense dreaming about the stars, and the future.

The clip above is part of a longer documentary directed by Pavel Klushantsev and released in 1965, called Луна́ (literally “Moon“, but usually translated phonetically as “Luna“). It’s available on YouTube, and even if you don’t speak Russian (I don’t) it’s a feast of retrofuturism:

Klushantsev was a documentarian with a background in special effects and an obsession with the utopian possibilities of space travel, and he combined the two in a series of films in the 1950s and 60s that beautifully illustrated what he thought the future of humanity in space would look like. The first half of Luna is factual, featuring Soviet rocket and space scientists talking about what we knew of the Moon at the time, from mountains to craters, ancient volcanism to whether the surface is solid or covered in fine dust. (We now know that it is, but not so deep that a spacecraft cannot land in it.) There’s a great bit starting at 22 minutes showing what happened to the Soviet Union’s Luna 1 and Luna 2 probes, too, which were fired at the Moon directly and took some of our first good close-up photographs of the lunar surface. (Luna 1 was another Soviet space first – by missing the Moon it became the first human-made object to enter into orbit around the Sun.)

Yet it’s the second half that’s truly fantastic. Leonov’s spacewalk segues into animated sequences showing how rockets might carry dogs and humans to the Moon, and then… we’re there: 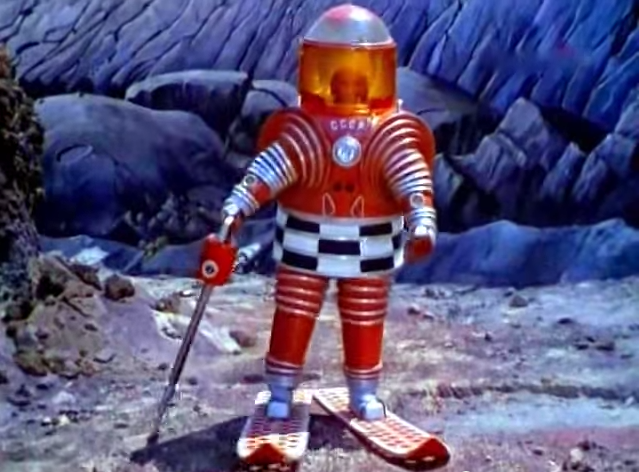 Klushantsev envisions teams of suited cosmonauts clambering over the lunar surface, climbing its mountains and surveying its ridges. These are film sets, with actors, but one of Klushantsev’s great achievements is that there’s little difference (to the casual eye, at least) between footage like that of Leonov’s spacewalk and Klushantsev’s Moontopia: 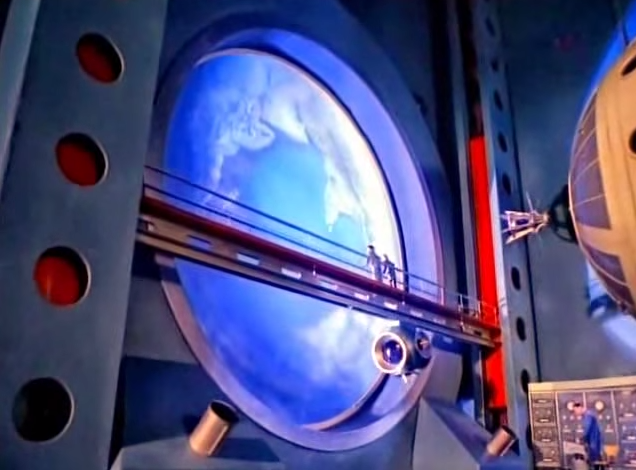 With the benefit of hindsight we can see the flaws in some of his fantastical imaginings – there’s a spider-like lunar lander which crawls around unusably slowly, for example, and the other planets in the Solar System wouldn’t loom as large, or as vibrantly, in the night sky – but there are other moments which have a hint of prophecy about them. The reason space agencies around the world are now talking about going back the Moon is because it might finally be economically viable, with substances like deuterium (a heavy isotope of Hydrogen, vital for generating power through nuclear fusion) relatively plentiful and cheap to extract. In Luna, the cosmonauts prospect for gold and oil: 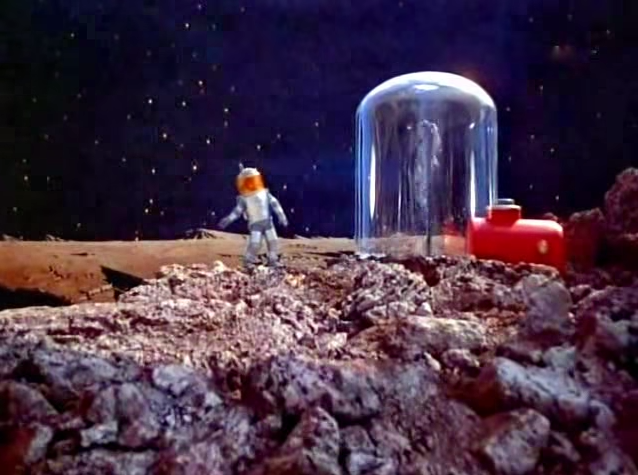 Luna was a sequel and update of sorts to what is perhaps Klushantsev’s most famous and influential work, 1957’s Дорога к звёздам (Road to the Stars). Released around the time of Sputnik’s launch, it was a comprehensive exploration of the current state of rocket and space technology as it existed then, while also imagining the future milestones to come: the first human in space (wearing classy leather fighter pilot uniforms), the first manned space station, the first spacewalk and the first colonisers of the Moon. Among its most groundbreaking achievements is what is considered to be the first accurate depiction of weightlessness on film (beginning 07:00):

Many of the shots in Stanley Kubrick’s 1968 classic 2001: A Space Odyssey are almost identical to those found in Road to the Stars – from conversations over videophone to circular space stations with artificial gravity – while his influence on other science fiction directors like Ridley Scott and George Lucas is pretty undeniable. Klushnatsev spoke to Robert Skotak for a piece in American Cinematographer in 1994, five years before his death, about how he filmed these scenes:

“The ordinary theatrical or circus methods of hanging in a girdle wouldn’t do for us,” Klushantsev notes. “That’s good enough when the actor has to fly straight ahead in a line or in a circular fashion, not changing his position. We had to do slow floating with somersaults, turns, etc. In all of my space pictures we employed [several] methods of imitating weightlessness. The first method was the ‘vertical shot’ The actor is dressed in a strong girdle and hangs from the ceiling via a thick steel rope, pulleys, and counterweights. The camera stays on the ground, the objective vertically above. The rope by which the actor hangs is hidden from the camera by his body.”

To be effective, such a shot needs plenty of vertical clearance. Klushantsev and crew had to cut a hole in the stage floor to put their cameraman in the basement, again arousing the ire of the studio bosses. This method was used for shots in the spacecraft cabin and for shots depicting the building of an orbiting station in space. When Stanley Kubrick made 2001: a Space Odyssey in 1968, he claimed to have been first to fly actor/astronauts on wires with the camera on the ground, shooting vertically while the actor’s body covered the wires. But Pavel Klushantsev had actually used the technique years before.

After the Apollo 11 Moon landings, many of the conspiracy theorists who believed that the United States had faked the whole thing believed that Kubrick must have filmed it on a set somewhere, possibly in a desert – after all, he’d pulled it off with 2001. It is somewhat ironic, then, that Alexey Leonov has been claimed by that group as one of their own after saying that it’s possible that Kubrick did film some unimportant shots for the TV coverage, like a hatch opening or the flag being pulled out of its container, beforehand. Some of the fantastical ideas that Leonov’s first spacewalk inspired were more grounded than others.