In a piece on Nerve.com, Harry Fisch, author of the new book The New Naked: The Ultimate Sex Education for Grown-Ups, reports that “an astonishing 45 per cent of men finish the sex act too quickly”. How quickly? Within two minutes, according to Fisch. This would seem to be bad news for those men’s partners and good news for the posthumous reputation of sex researcher Alfred Kinsey, whose research in the 1940s and 1950s concluded that three-quarters of men usually ejaculated within two minutes.

Before you conclude that Fisch’s data simply represents more evidence of a male-dominated society’s inherent pleasure inequality, it’s worth noting that more recent scholars have looked into the question of what the different sexes actually think about it. As it happens, men may be more bothered by it than women. For a 2004 paper in the Journal of Sex Research, University of New Brunswick researchers S Andrea Miller and E Sandra Byers interviewed 152 heterosexual couples on their “actual and desired duration of foreplay and of intercourse”. Their subjects spanned a wide range of ages – 21 to 77 years old – and relationship type – from 6-month to 50-year partnerships. Miller and Byers found that men reported a much longer ideal duration than did their partners. 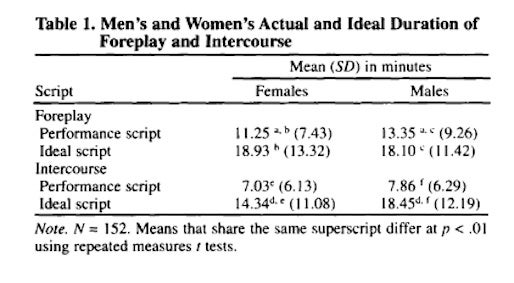 It’s true that for both sexes, the “ideal” length of both foreplay and intercourse was much longer than the actual. But the New Brunswick results at least suggest that the men are not happy with this status quo.

Fisch also points out that two minutes is “way too speedy for the average woman to be able to have an orgasm through vaginal penetration alone”. But an even older piece of research suggests that link might not be quite so clear. In a 1951 paper in the Journal of Psychology, “Correlates of orgasm adequacy in a group of 556 wives,” psychologist Lewis Terman found no significant correlation between intercourse duration and female “orgasm adequacy”. Alas, the concept of speed has not fared as well in more recent research. In a 2009 paper in The Journal of Sexual Medicine, Czech psychologists Petr Weiss and Stuart Brody found, based on surveys with 2,360 Czech women, that women’s chance of having an orgasm was much more highly correlated with duration of sex than of foreplay. 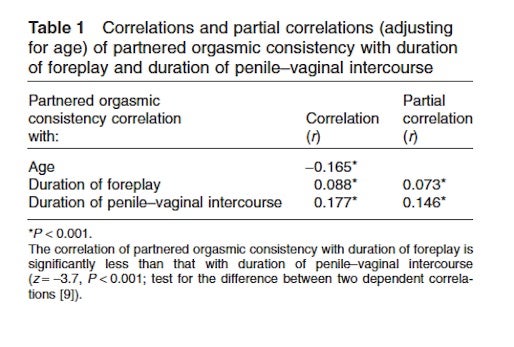 The good news here is that, according to Fisch, the average duration is 7.3 minutes – only 4 minutes less than women’s “ideal”.